Infinite softness. Ah, what a dream. There is a certain political, identity-driven energy behind the phrase, one that suggests a (perhaps a privileged) lax attitude to working life, anti-grind culture, alluding to queering the norm, but what do we actually mean when we say 'soft'? A similar question can be asked of the word 'tender'. They are increasingly prevalent in conversation and discourse, but a lack of hard definitions is probably the way to go in an attempt to investigate, as opposed to define them. In living in infinite softness, it would surely be luxurious to avoid caveating everything we say.

Installation view: Infinite Softness, 13 January - 29 January 2023. Danuser & Ramirez, London. Image courtesy of the gallery.
This seems to bode well with the foundational ethics of emerging gallery Danuser & Ramirez, which states an ambition to "grow from a substrate of cutting edge contemporary art discourse and love ethics". This is something I read and immediately could not ignore, mostly due to the fact that, from a decade of writing and engaging in said discourse, the statement seems to be something of a paradox. But in infinite softness, surely we must live in hope, and I am intrigued and invested in following how this ethos might manifest itself. 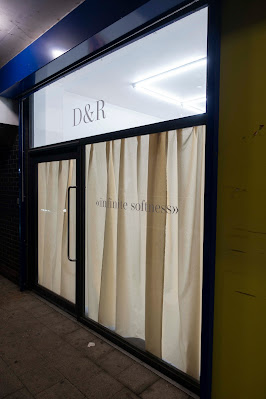 External view: Infinite Softness, 13 January - 29 January 2023. Danuser & Ramirez, London. Image courtesy of the gallery.
Upon approaching the gallery space, based in Deptford in south east London, I was comforted to see a light beige curtain draped along its window. I remarked that this is exactly how I would want to dress such an exhibition; earthy, muted palettes are soft, soft, soft. But without falling back into cliche or archetypes, how have the curators decided to address the theme? The result seen at Danuser & Ramirez is, personally, exactly how a group show should feel, in that it presents itself as more of a transcient, fleeting moment in time above something that flatters itself enough to position itself as a theme's hierarchical overlord. 'Infinite Softness' presents itself as something of a mood board; the artworks are not necessarily in dialogue with one another, but there isn't anything that feels out of place. In an environment of infinite softness, perhaps we just allow everything to coexist; no inquisitions. 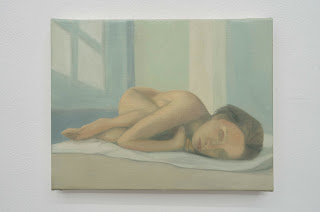 Elizabeth Dimitroff, Place of Memory, 2022. Oil on canvas. Danuser & Ramirez, London. Image courtesy of the gallery.
One artist whose work really stands out is Elizabeth Dimitroff, a London-based artist whose series of paintings of a nude woman feel somehow refreshing and calming. They evoke a sense of isolation, as the figure contorts in various positions whilst sitting alone, presumably in the domestic space but this is ambiguous. The images present the body in an otherwise barren space, with dull tones not entirely dissimilar to the pale skin of the gazing woman; this is reminiscent of Socrates' maxim "the body is the prison of the soul", and the social isolation and low buzz of anxiety in the works simmer in the periphery of the focal point of an infinite softness. Is there a softness in permitting your demons to be your bedfellow? The gaze of the woman is returned by the viewer in both 'Place of Memory' and 'Curled Up', which is simultaneously disconcerting and sweet. Two lonely souls in two bodies; how different are we, how similar are we? 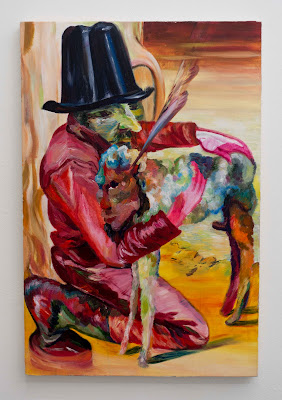 Yaya Yajie Liang, Clarice Starling, 2022. Acrylic on canvas. Danuser & Ramirez, London. Image courtesy of the gallery.
YaYa Yajie Liang's sole painting in the gallery is the first work encountered as you enter the space, yet initially it doesn't set the tone of softness. Through the painting 'Clarice Sterling', we are asked to approach softness differently. While the palette of bright pinks, reds and browns is arguably more hyper-stimulating than any other work in the gallery, the scene unfolding on the canvas presents a rather tender relationship. The grotesque and the soft are hence shown together in perfect harmony, acting as a brutal force to challenge what 'softness' might mean. Less abandoning your responsibilities and heading to the woods, and more facing the things, and the people, that challenge you with an open softness. Without lazily falling into a liberal stance, perhaps that is what makes an infinite softness.
Labels: deptford domestic painting softness south london