Pace Geneva: teamLab 'Existence in an Infinite Continuity' (until 2 July 2022)

With spaces in New York, London, Hong Kong, Seoul, Geneva, Palo Alto, East Hampton, Palm Beach and Los Angeles, there is no denying that Pace Gallery is one of the contemporary art world's leading names. Something that the gallery does really well is scale, namely that their locations aren't huge, but they're certainly not cramped, and are always airy and light. They are a comfortable midpoint in which audiences can immerse themselves in artwork, while also enjoying space for contemplation. Artists exhibiting at Pace are usually somehow immersive in their nature, so it is strategic and immaculate in its execution. I recently visited their site in Geneva, Switzerland, on a whim, having received an email about the best Swiss galleries and museums half an hour before the gallery was due to shut for the weekend. Realising I didn't have much time, I quickly bolted along the Rhône and found Pace Gallery in a fairly unassuming unit facing the river.

Having travelled quickly in blistering heat, I was met with an exhibition that fuses a sensation of urgency and calmness that is incredibly unique and often perplexing. The lighting was a little brighter than that in the installation shots supplied by the gallery, but upon entering the space there is a mixed feeling of tranquility and abundance; the latter, surely, derives from the high-spec nature of the works. 'Existence in an Infinite Continuity' is a showcase of five works by international collective teamLab, each in the medium of digital video works displayed on large monitors of either fifty-five or eighty-six inches. As the various shapes and visuals move between screens, there is something of an immaterial opulence about them; a sheer liquidity as the works, which are all on loop, seamlessly progress. 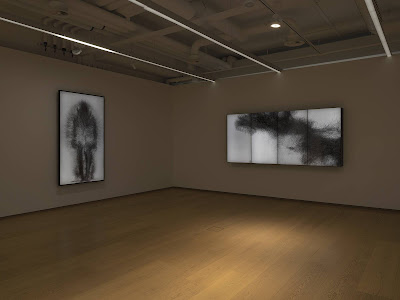 Among the descriptions of the works, through the gallery press release, we find some thought-provoking and grounding phrases which enrich the experience instantly. Considering how a digital work might have the power to "explore life as a phenomenon that exists in an uninterrupted flow of energy" invites a moment to consider how the individual, as well as the artwork, fits into this entirely organic, uncontrived framework. Being sat in the gallery with very few other people, married with the visual acuity of the monochromatic works, certainly invites a moment to dissolve the micro and the macro. The belief that we are all flowing in a universal "uninterrupted flow of energy" feels like a short antidote to our anxious culture, whilst reasserting collective responsibility.

The real joy of the exhibition lies in the fact that it is powerful on an aesthetic level and then exciting anew once we have learned more about the concept behind the work. Essentially, teamLab use thousands of minute black lines in order to create formations that are moving, and almost breathing, in a way that feels incredibly organic and like a visual language. Tellingly, teamLab are an international collective, and being able to express oneself in such a strong and meaningful way reflects this cross-cultural approach. As an interdisciplinary group, between them they work as artists, programmers, engineers, CG animators, mathematicians and architects, and that is clearly evidenced in their work. Whilst teamLab are certainly well known in the art world, their name may ring a bell to anyone that's been to some of the large-scale immersive exhibitions that seem to be sweeping through cities across the world at the moment. At the time of writing, they are currently exhibiting in Saitama, Kyushu, Tokyo, Singapore, Shanghai, New York, Prague, Okayama, Macao, Miami and, of course, Geneva (including their new collaboration with the Grand Theatre de Geneva). While they usually work on awe-inspiringly huge scales, it is a differently indulgent experience being able to view teamLab's video works as singular pieces on a wall, then being able to remove oneself from them at will. With an enviable profile like theirs, teamLab are a hardly a tightly kept secret, but with a few selected works in a relatively small space such as Pace Gallery Geneva, the viewer can indulge in what feels like a private environment with these incredible digital artworks.