Depicting melancholy, especially that of women, in contemporary art is a very loaded ambition. Too specific and personal, and the artist risks over-exposing or even pathologising themselves and their own biography, but equally if it is not specific enough, it will simply not affect the audience. That is why I was interested to come across Los Angeles-based artist Jess Valice's work, entirely by chance, at Carl Kostyal on Savile Row in Mayfair. There is a deep sadness in this new series of paintings, one that due to their size can bleakly stare back at the viewer in a way that doesn't intend to draw out one's own anxieties and misery, but almost a mutual emptiness that balances and validates the other.

Carl Kostyal gallery space is a seriously smart backdrop for an exhibition; this was my first time back since reviewing their group show 'Fingertips' in November 2019, but it seems that painting is the optimum medium of choice for the beautifully wood-panelled walls, which seem to harness a warm, but not isolating, darkness of their own. This brown interior somehow creates a more comfortable environment from which to view paintings, as opposed to a bright white cube space, and in works such as 'Sleeper', it is almost as if Valice's figures are crying out for company, despite being entirely deadpan and expressionless. 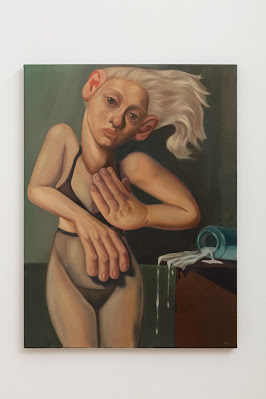 My favourite piece in the show is 'The Spill', a similarly blank-faced figure with the huge, deep, sorrowful eyes that seem to be the artist's calling card, alongside oversized ears and hands. The surreal size and shape of the hands make the figure's entire gesture ambiguous; the fact that they are in underwear would suggest that we are a prying eye, and there is certainly no explicit allure here. A spilt white liquid coming from a toppled container would imply that actually, now is a bad time to be looking at them and attempting to interact with them. Yet, holding our gaze with their blank expression, we are met as we are, and seem to be frozen in that moment in time of insecurity and messiness, however fleeting or seemingly mundane it might feel. 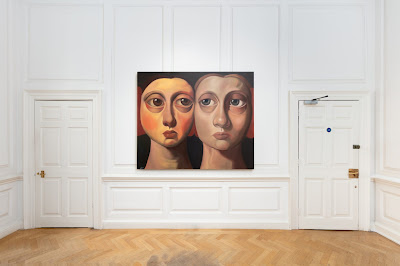 Installation view: Jess Valice, Two Heads, 2022. Oil on canvas, 152cm x 182cm. Image courtesy of the gallery.
The huge eyes we see in every painting are so much more than an initial talking point; they seem to crave to be seen, yet they are living in the same world as us: social media makes being seen simple, but it is on a shallow, instant gratification level, the great neutraliser. We have to be visible to move up in the world, but this endeavour in itself is superficial and exhausting. Every figure in Valice's work is exhausted; even 'Andrew', whose huge ears would suggest a point of amusement, brings us back to reality with their heavy eyelids and unrelenting glare. The show's title is a great way of tethering viewer and artist, as the pleasing fusion of realism and cartoonish features can be entertaining, but somehow we can very much see ourselves in these works. Even 'Two Heads', shown in the office suite of the gallery, resemble Easter Island statues with their magnificent size and stunning features that are impossible to walk past, but the ways in which the two figures make eye contact appears to be slightly mismatched. Sometimes even at physical proximity it is incredibly difficult to see each other where we are, and for who we are, but Valice's paintings meet you outside the canvas with their gaze, take you within yourself and remind you of your innate humanity. 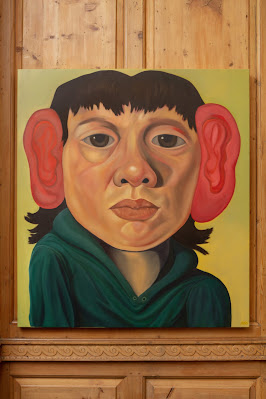