It is surely a sign of the attention-deficit times that I can rarely commit myself to video art. When I do, it feels incredibly indulgent; bizarrely so, as I would not begrudge myself watching a thirty-minute Netflix show, but sitting down in a public space for eighteen minutes feels truly like I am making time for not only myself, but to understand an artist's work and truly immerse myself in it. Heading to South London Gallery, a space I have visited many times, I was enticed into a video work by Birmingham-based artist Alice Theobald by its stunning curation.

Alice Theobald, IL Y AURA (There will be), 2022. Film still, image courtesy of the gallery.

I was fascinated to learn that Theobald composes the soundtrack to her video works herself, because I happened to enter the gallery at the point of the two characters dancing together, an almost Waltz-like movement that was a real contrast to the rest of the film. The music is certainly filmic and bold but entirely melodic and apt for an institutional showing; it has a strength of its own which keeps attention firmly locked into the work.

But more about the exhibition: 'IL Y AURA (There will be)' is a video with a deceptively simple premise which unravels the longer the viewer experiences, and indeed thinks about, the work. I was initially gripped by the gender dynamics, with the artist herself starring as a fairly timid young woman, being tutored in a basic yet increasingly unorthodox fashion by an older man, played by Thibault de Montalembert, who eagle-eyed viewers will recognise from the brilliant comic-drama 'Dix Pour Cent' ('Call My Agent' in its English iteration).

Something rather tantalising about the work is that the viewer remains unsure as to how to feel, and this generates a readiness, an appetite to see where this 'Odd Couple' setup might lead. The woman protagonist, played by Theobald herself, enters a (stylistically certain, decidedly) Parisian apartment, where she is tutored in French vocabulary by an older man (de Montalembert). It is fairly clear that the woman is already fluent in French, so this is not simply a learning exercise, and the South London Gallery's press release teaches us that this is the artist's lamentation, or indeed fear, of gradually losing her mother tongue. The way in which the man drills these sentences into her, shouting at close proximity whilst reading the lines, is reminiscent of both micro (and macro) aggressions in the workplace, and overzealous, pushy parents making one-way communication with a child. 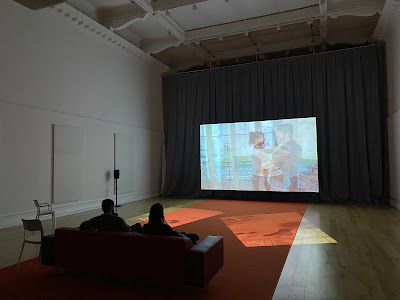 Each sentence begins with 'Il y aura...' ('there will be'), and we can't help but wonder about the purpose of repeating this particular phrase. Hope? Propaganda? Indoctrination? It is not as if the man is reciting and Theobald is repeating them back; they often overlap each other. The exhaustion and certain degree of fear and angst conveyed by Theobald's character is tangible as the piece continues; the man's assertive aggression is relentless and is even exhausting to watch. There are moments of respite whereby seemingly arbitrary things happen, such as the woman spilling a drink over herself, but the best one is towards the end when the two of them break into a slow, gentle, almost romantic dance. It gives us a moment of respite from the loud verbal exchange to think about what the artist is actually trying to communicate.

The 'there will be...' statements focus on the mundane ( such as "there will be a bus running late"), which makes the increasingly domineering behaviour of the man more unnerving and inappropriate. Despite their being banal, the repetition sounds like a manifesto, a dictator's speech, or a scaremongering strategy for the masses. One of the great qualities of the dialogue is that it is very much open to interpretation; alongside the smart and slick curation, including spotlight projections on the floor in front of the seating space, 'IL Y AURA' becomes an exploration into how identity must be practiced, sometimes violently, against our will and contrary to what society, or even our immediate environment, dictates.