Tucked away behind the first floor of a retail unit on one of Soho's busiest streets, Amanda Wilkinson Gallery is the perfect location for this small exhibition of photography by New York artists Jimmy DeSana and Laurie Simmons, who made work together but fall short of being an 'artist duo' on several counts. With all the clandestine activities that fall beneath the cracks in this part of town, the show, titled 'Double Trouble', boasts both a concealing and exposure of identity, subculture and meaning. The works are rich, sometimes funny and stylistically incredibly pleasing, and the small nature of the space allows us to absorb each piece with the attention it deserves. 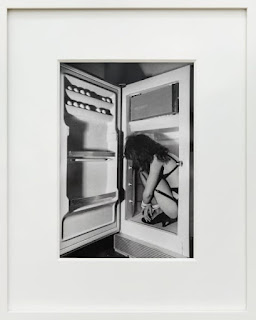 The gallery is very keen to emphasise the marginalisation of both artists, DeSana as part of the queer community during the AIDS pandemic, and Simmons as a woman practicing in a male-dominated art world during the same time period. Of course these aspects are important to understanding the perspectives of both artists, especially given that DeSana died from AIDS-related illness in 1990, however their subversive use of photography and fashion provide their own visual language for this. The high-fashion aesthetics of the work by both artists speak to a contemporary audience, as well as those in the late 1970s who would have seen the images the first time round. 'Refrigerator' by DeSana is a personal favourite; a black and white shot of a woman crouched artfully into a fridge section wearing black lingerie. While stylistically it is, as I have said, incredibly pleasing on the eye, there is also a huge feeling of the paradoxical feelings of being a sexually liberated woman, and how sometimes this does not feel the case to the individual. In the twenty-first century, the right to hide away from attention is incompatible with capitalism; we must be available, competitive and fiscally attractive. Hiding away means a vastly reduced capacity to make money. 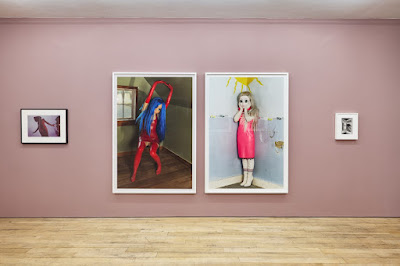 The way that the works have been curated feels somewhat like an archival space. Through this observation, we see a lens of a different value: what are these works telling us about the time in which they were produced? Laurie Simmons, DeSana's collaborator and fellow artist, was hugely influenced by her friend, and this is evident in her works in the show, dating from 1991 to 2014. Both artists seem to parody the effect fashion can have on the wearer, and the social psyche produced by fashion and culture more broadly. The element of advertising is also made playful and exaggerated, perhaps nowhere more so than DeSana's 'Parka' piece, whereby the item of clothing is captured mid-air, meanwhile the wearer's body is fully exposed from the chest down. Perceiving the body as object and releasing feeling and sentimentality is surely a joyful pursuit; there is a real fusion of creativity and liberation in these works, transcending the time frame of 1980s New York. 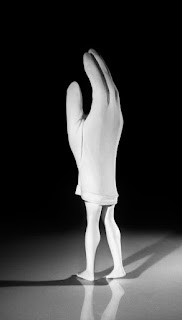 One of the most appealing things about engaging with these works is that they seem to be just the right degree of escapism. With 'Refrigerator', imagery is both surreal and domestic; one obvious reading of the photograph may be one of concealing one's identity, but still doing so in a creative and highly stylised way to express oneself even in implicit, subtle gesture and act. Amanda Wilkinson Gallery says that "DeSana used fashion as a way to reveal rather than conceal the body, in defiance of the homophobia of the time". This fusion of camp, dark comedy and high fashion is, at times, entirely irresistible.

Here, Simmons' work often feels like more of a supplement to DeSana; it is certainly of interest that they were practicing at the same time, yet the works by Simmons selected for 'Double Trouble' are from 2014. Although much more bold on the eye, the recent pieces stage the body as object in quite a different way. With such exaggerated faces and costuming, the former of which not featuring in DeSana's work at all, there is a dark anonymity to Simmons' fashion statements. The characters pose, but they give nothing away; even when the figure in 'Blue Hair/Red Dress/Green Room/Arms Up' flashes a prosthetic plastic crotch, there is still nothing to see. This is somehow reminiscent of the dangerous obsession gender-critical "feminists" have with genitalia, namely that of trans people. No one has the right to another person's private biology without their express consent, but so you know what's in their pants: so what? What are you doing with that information? No one here is making light of that situation with this comparison, yet the work does serve to highlight the absurdity and privacy invasion of such a morbid fascination. This is obviously a wider point of discussion around fetishisation and consent, and one that these works trigger succinctly. 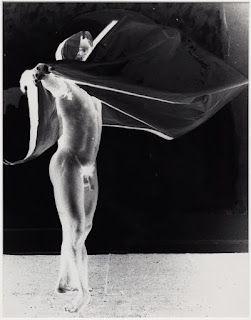