There are several fascinating elements to exploring Brazilian artist Katie Van Scherpenberg's work, not least because this exhibition at Cecilia Brunson Projects is my first encounter with her work as well as her first UK exhibition, an incredible fact given her practice spans over five decades. A gorgeous publication accompanies the exhibition, with a text covering Van Scherpenberg's practice in highly researched and theoretical detail, but my approach is an opportunity to merge my personal responses to the exhibition while researching its geopolitical and historical context in order to best understand Van Scherpenberg's works. Given that these pieces have never been exhibited in the UK before now, I believe the fresh angle I am taking to be apt. 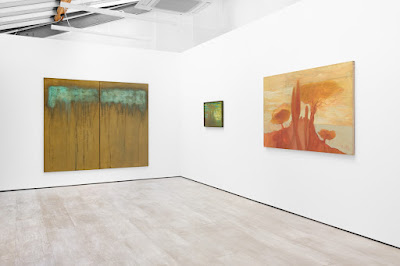 Upon entering the small space, located off the buzzy Bermondsey Street in the central end of south London, I was pleased to encounter two aspects of a painting practice which make me greatly happy: earthy textures and skewed, or alternative, depictions of faces and bodies. For some time, Van Scherpenberg was based in a remote part of Brazil, Ilha de Santana, near the Amazon river, and the inspiration and use of natural minerals and pigments are evident here. A red and orange-infused canvas, which is actually marine plywood, almost emits a warmth in its depiction of trees and hills. As the eponymously titled painting, translated from Portugese 'Vista sobre o amazonas', the piece is simple yet incredibly pleasing to the eye. In the oft-grey city landscape, these shapes, colours and motifs act as something of an introduction to Van Scherpenberg's physical environment and a real visual voyage away from London. 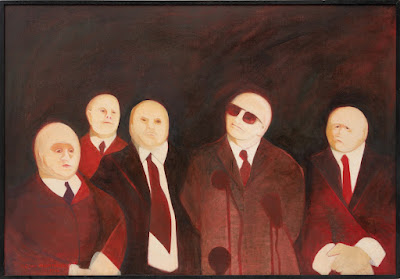 From the show's press release, we learn that the tumultuous political moments of the late twentieth century in Brazil affected the artist's work, and access to materials, hugely, so the satirical painting 'Untitled' made in 1976 from a series titled 'The Executives' is well placed. Art that plays with being searingly satirical in the domain of politics is not always successful for various reasons, but there is something incredibly elegant at play here: from the ridiculous and comedic expressions on the men's faces, to their anonymity through being stylistically almost identical, via the deep red hue implying mass bloodshed. The Brazilian military dictatorship started in 1964 after a military coup, and lasted 21 years. It is truly fascinating to observe how the artist has chosen to create her own imagery of this period, with their amusing qualities being an interesting, and bold, aesthetic decision given the censoring of media and torturing and exiling dissidents that took place. 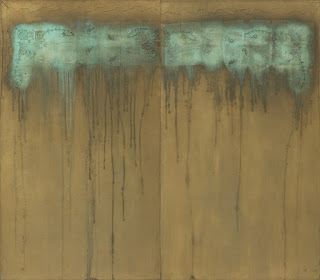 The show-stopper of the room is arguably the large scale 'Portal'. The image as shown above does not truly illustrate the presence it has in the gallery. Understanding the artist's use of natural materials and pigments makes the piece even richer; while the palette used is not the most aesthetically attractive, there is a certain compulsion to revisit it. This was the result of a combination of factors: its ambiguous visuality; its intriguing title; its sheer scale, and the curiosity of the work being composed of embroidered bed sheets on canvas. Despite the dark and earthy tones, this symbolism of intimacy and domesticity brings an entirely new dimension to the work, showing the messiness and roughness of daily life, which is transferrable to any culture and audience. A universal visual language from a distinct culture with an almost pedagogical value is a wonderful and rare combination. Although it has not been inspired by such an environment, 'Portal' somewhat resembles a dilapidated urban space; I suppose this is simply one viewer bringing their own experiences into the gallery, and this is truly an enriching aspect of being introduced to a new artist.

With a size of 109.5cm x 192cm, very much dwarfing the viewer, it is very easy to be drawn to this piece first, and in fact it could be said that it sits at the head of the table, so to speak, setting the scene of artist and exhibition alike. However for me, the smaller works were the real highlights, offering a melancholy and maudlin that other bigger paintings merely implied. 'Pai morto [Dead father]' from 1972 is a fine example of this. As the title suggests, the painting is incredibly dark and morbid, with the deceased body adopting an insipid green colour. Van Scherpenberg was never affiliated with any group or artistic movement, so intensely personal works like this are able to be exactly that. The isolation of her physical location also amplifies this ability to channel a very individualistic style and presence. At a small size, 'Pai morto' demands the viewer to take a closer look, at which point we are fully absorbed by the despair of the scene, deepened further by the addition of a loving companion dog by the father's side. Such an absorption into a culture and practice is something that runs through 'Overlooking the Amazon', allowing London audiences to learn about Van Scherpenberg's individual practice, ideas, narratives and environment, in a way that is hard to find in an art world full of cliques and pretence. 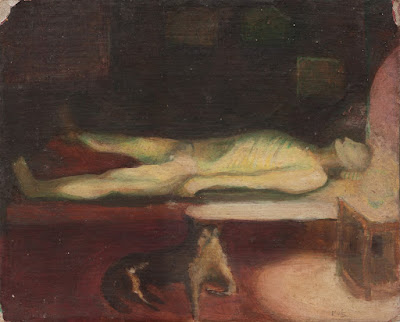