Or, Why Prudence Flint's Paintings Speak to a Voiceless Mental Health Epidemic

My happening upon Australian artist Prudence Flint's paintings at Bethnal Green gallery Mother's Tankstation is a fairly interesting one, as there are various reasons why they had such a profound effect on me. Firstly, it was towards the end of Frieze week in London, which for anyone who doesn't know is the biggest week in contemporary art in the city. Aside from the art fair itself, there is huge demand for galleries to turn out their biggest exhibitions of the year. The frenzy on social media is then catapulted into parody, with (depending on who you follow on Instagram) an obligatory influx of all the most Instagrammable works and booths from Regent's Park, with usually the same four or five pieces, mostly sculptures, being posted multiple times a day. For people with a love for art, but for whatever reason cannot commit to it full-time (bills, anyone?), it can be rather depressing.

So, dodging the fair entirely this year, I headed east to leisurely check out some shows. I had seen Flint's work several times online over the various lockdowns, but this encounter was my first in real life, and the paintings had an unexpected effect on me. Mother's Tankstation's latest iteration is on Three Colts Lane, and is one of three galleries in a row, having all relocated from different areas in London. This presented a risk, much like Frieze itself, of overwhelm due to multiple exhibitions in a small geography, yet 'The Call' stayed with me long after leaving. 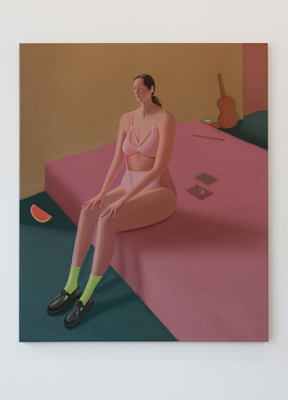 The flatness of the paintings transcend well into the virtual realm, but experiencing them in person is, pleasingly, just like seeing them anew. I have seen and commented on 'flatness' in contemporary painting before, but the emotional impact of this is executed expertly here. Vast expanses of block colour and depicted block objects fully emphasise the solitude of Flint's subjects. Despite the fact that the artist is a fairly new discovery to me, I would not be surprised to see her featured in many all-woman exhibitions and publications in the near future. An incredible stillness emerges in the works, one that resonates with so many of us and feels very contemporary, very of the moment.

It is at this point that I would like to raise the subject of the mental health epidemic. I speak of it from the perspective of the UK but I am sure it is similar, if not identical, around the world. The solitude that came from the flip-flopping of lockdowns here completely threw the mental health of many people; the constant uncertainty of what was coming next and how best to protect ourselves and our loved ones when conflicting advice was being handed out to prioritise profits before lives was something that I thought would be impossible to engage with in the next chapter of contemporary art, as artists grapple with social issues and real situations. 'The Leaving' is a wonderful example of the quiet stillness that we were left in, while subverting the gaze in an interesting way. Flint's woman is sat on her immaculate bed in her underwear, but somehow she is defying being sexualised. Is it her disproportionately small head and feet, which make her less realistic? Is it the almost comical inclusion of her shoes and socks? As it transpires, it doesn't matter, because there is a palpable solitude that induces empathy, almost to an unnerving degree. 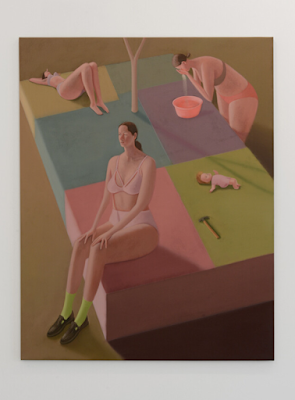 Communicating loneliness can be a very sticky interaction. Selecting the right person to confide in is a crucial decision, as for an outsider looking in, loneliness is perceived to have dissipated itself at the point of contact with another person. Of course, this is not the case. Flint's barren spaces within the domestic environments are a sound illustration of loneliness, and the various poses viewed on the canvases display the various movements of solitude. This does raise the point of where we are with mental health; systemically, the widespread introduction of Cognitive Behavioural Therapy (CBT) is the ultimate neoliberal offer to give patients a taste of support and a toolkit, but after a short burst of sessions (which depressingly went online to an entirely computerised programme during the pandemic), one is left to get on with it, and is ticked off the list. Considerable amounts of funding have gone into the provision of CBT, entirely ignoring the societal and environmental reasons for requiring support in the first place. This is not a critique of the therapists at all, but of the system in which they are expected to work through multitudes of patients with a rapid turnaround.

Whilst in my writing I ordinarily prioritise analysing elements of joy in contemporary art, the way in which pain and agony are depicted so beautifully sends my own ideas of joy into a spin. It is hard to deny that the paintings that make up 'The Call' are beautiful and thought-provoking, and this in itself is a joyful experience. 'The Lost', for example, condenses multitudinous facets of the "experience of Woman" so well (although it is worth noting that I do not believe in gender essentialism, and am a strong advocate of the eventual dissolution of gendered structures), or at least the complexities and expectations that are laden onto people of marginalised genders. The simple illustration of such complex ideas is a humbling experience at Mother's Tankstation, and it feels like the pain that some of us have been holding and holding for so long is understood, in a way that is not patronising, nor is it spoon-feeding it to an additional audience. There is an intimacy between artist and viewer at play here which should be wholeheartedly cherished. 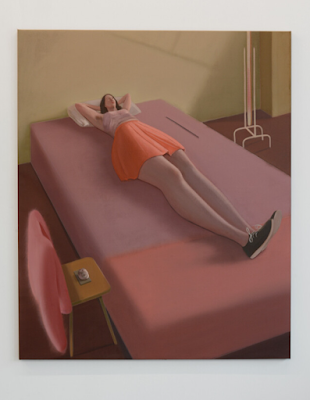 A harsher critic than I may claim that the artist's use of what was for a time called "Millennial Pink" is a cop-out in terms of creating a certain ambiance, but I would suggest that insisting an artist over-complicates (or even "over-academicises") an aesthetic is counter-intuitive to what Flint is doing so well here. The ways in which this recurring dusty pink produces calm, stillness and, as mentioned, flat surfaces, does not need to be disputed. These microcosms do not try to tell us a story; instead, their stillness allows us to feel deep and at times disjointed emotions, almost communally. Further still, the simple hanging and curation of this small show accommodates a sharing of space and narrative for the audience. The gallery is spartan yet warm; perhaps it is the domestic settings presented in Flint's paintings but the alienating tendencies of mental ill health and isolation suddenly feel neutralised. I do not wish to overstate the soothing nature of Flint's work, as of course this is a subjective response and not one that every viewer will experience, but at a time where the mantra of "keep[ing] calm and carry[ing] on" has been revived in the name of propping up the economy and returning to "normal", we can learn here that we must take it upon ourselves to make time for re-evaluating and slowing down, and that it is okay to bask in the silence. 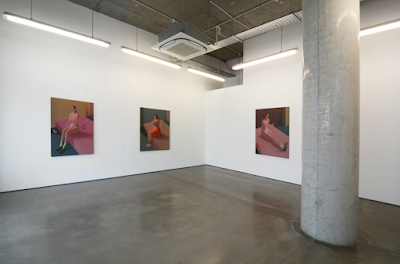