Folkestone Triennial: The Plot (until 2 November 2021)

Folkestone is a town along the south coast of England which, like several others dotted along the same line, has a flourishing arts scene, which I imagine will have been enhanced further by the post-pandemic boost of domestic tourists and the large number of people who, realising they could do all their work remotely, promptly abandoned the big city in favour of fresh sea air. Personally I had never been to Folkestone until the last week of September this year, but I was very pleasantly surprised by what is a contemporary-feeling town steeped in both history and active creative buzz. The latter is in no small part due to the Triennial festival, which opened at the end of July and will close at the start of November of the same year. By the time I made my visit, summer season was wearing off, so I enjoyed a slower and calmer pace to exploring the festival, which is a trail of commissioned public art pieces, mostly in the medium of sculpture. 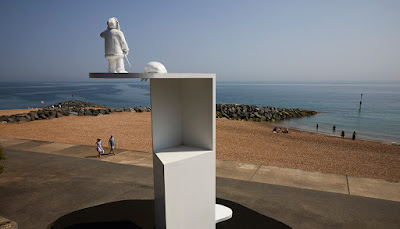 Despite the public, open and non-traditional surroundings, there is still a very institutional feel to the Triennial, especially with the works commissioned in editions of the festival gone by, which are now permanent fixtures, such as Bill Woodrow's fantastic 'The Ledge' from 2017. This is not so much a critique, as of course funding for this free festival would require organisers to liaise with top galleries and collections, so I wasn't expecting to see anything too guerrilla or provocative. If we can overlook this and not let it get in the way of our enjoyment, which we mostly should, Woodrow's permanent sculpture overlooking the beach is not only stunning against both sky and sea, but produces a powerful message about rising sea levels. Aesthetically, it is also reminiscent of the nearby white cliffs, making the work architecturally poignant and apt too. 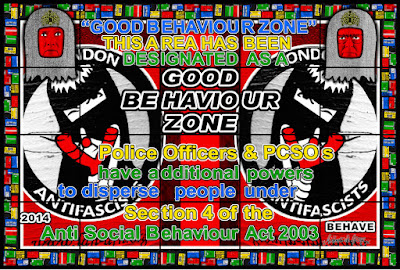 Gilbert and George, BEHAVE, 2014. Image courtesy of the artists.

Gilbert and George's works are certainly also worth a mention, as potentially the most provocative of the set works curated by the Triennial. 'BEHAVE' from 2014 is a personal favourite, especially during this time of heightened tensions with the police and the abolition movement gaining momentum. In fact, 'BEHAVE' blends into the urban design so well that I was initially confused and duped into thinking that it was official messaging from the local authorities. It reads: "Good Behaviour Zone: This area has been designated as a Good Behaviour Zone. Police Officers & PCSOs have additional powers to disperse people under Section 4 of the Anti Social Behaviour Act 2003". Exploring the work further, while these powers are very much contested, the ability of the police to disperse groups of two or more in any public place which they deem to be unsettling is a very dark reminder of the growing tensions against police, and is certainly food for thought at the least. Enticing the viewer with bright colours and graphics, ultimately there is no playing around in this work; facts are being disseminated clearly, and we must pay attention to the ways in which we receive and respond to them.

So I've touched upon the politically and socially charged, but there are others which stand out in their evocations of tranquil moods and environments, both indoors and out in the open. One of the former is Jacqueline Poncelet's 'Shimmera' installation, a discreet yet stylish addition of large sequins to some of the new builds. As the title suggests, the piece catches the light and brings a touch of uncomplicated elegance to the architecture. 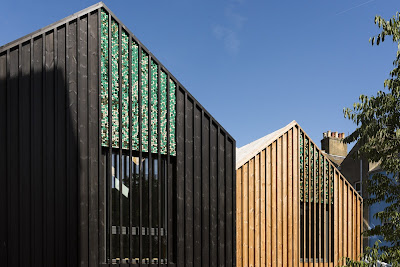 Ultimately, there is such a vast number of works to discover in Folkestone at the moment, some which are rogue local artists taking up space in different and occasionally anonymous ways, and others by names as huge as Tracey Emin and Banksy, which are so hidden you can easily walk past them. This brings an element of effort and reward to the trail, giving you a genuine opportunity to explore the town, its quirks and of course the plethora of artists on display to the public. Regardless of the respective artist's status, the works have been commissioned and curated brilliantly to integrate with not only the landscape but also the creative and general public communities.

Using the human form as subject matter is something I believe to be really important when connecting with people who may otherwise feel disinterested or otherwise disengaged with contemporary art. Predictably, Anthony Gormley, Cornelia Parker and Paloma Varga Weisz do this incredibly well, all having produced works in direct dialogue with their immediate environment. The Folkestone Triennial is an excellent way to embrace the art scene along with a new, or familiar such as the case may be, area. For me, such an event is the pinnacle of what contemporary art has the potential to be and do: welcome in strangers with open arms and greet them with sensory stimulation to understand each other and the social issues that are very much entrenched in us all. 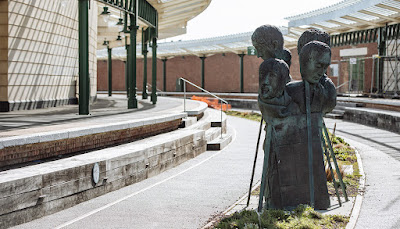