Carl Freedman Gallery: Breakfast Under the Tree (until 5 September 2021)

'Breakfast Under the Tree' is a group exhibition at Carl Freedman Gallery, which has relocated to the seaside town of Margate in the south of England, from its original Shoreditch space. I am always particularly excited to see art in interesting, or different, places, and immensely enjoyed Carl Freedman's latest exhibition, filled with artists of international acclaim. More importantly than their respective reputations, the artists show a range of styles and perspectives on contemporary living, which is ultimately the raison d'être of the exhibition.

After leaving the show, when asked what they thought the show was about, the friend I visited with said, simply: "sex". While this is partly true, what makes many of the works so powerful is how they depict the scenes and sensations of different kinds of intimacy, which has been outlawed for much of the last year. Of course, sex is one of those things, mostly for single people, but with 'Breakfast Under the Tree', curator Russell Tovey reminds us of the minutiae of every day interactions that we had missed during the various lockdowns, and taken for granted beforehand. Queer domesticity is well represented here, and collectively it all feels effortlessly inclusive.

Anyone that's tuned in to Tovey's podcast 'Talk Art', which he presents alongside Carl Freedman's director, Robert Diament, will totally respect and understand the curator's credentials to put on this show. It's a great podcast that really allows you to get into the mind of the artist, as they interview a different one of interest in each episode. I particularly recommend the episodes with Lindsey Mendick and artist duo Hannah Quinlan and Rosie Hastings, who are all featured in 'Breakfast Under the Tree'. 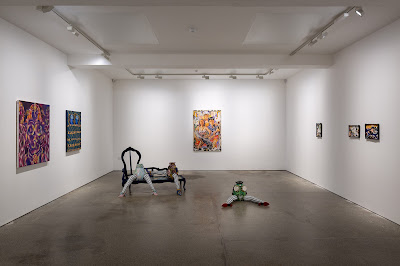 It would be a futile activity to try and choose a favourite piece, or even a favourite artist, from the show, as  they all feel so fresh and so different. There is a young, energetic feeling in the space; not to be mistaken as naive or juvenile, but it really feels relatable and fun, something that is a joyful luxury in the real world and the art world alike. That being said, I kept being drawn back to the work of south London-based artist Sola Olulode, whose illuminations of black femme-hood feel contemporary in irresistible, dominant colour palettes. Her practice is compelling for several reasons, with paintings reminiscent of both the richness of London life and the artist's influence of Yoruba Adire textiles. 'Under the Moonlight' didn't photograph so well when I tried to document it in the gallery, but its gorgeous blues depicting a silent episode of intimacy felt like they were calling me by my name. 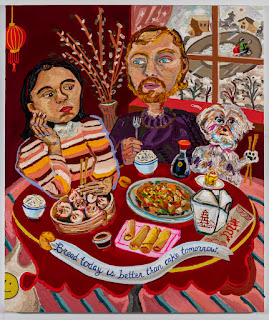 I'm really pleased that I was able to see Jersey City-based Ana Benaroya's work, which pairs so well alongside Sola Olulode. Beautiful, bright colours depict the body using patterns that have an intergalactic aesthetic. All other works in the show are very much rooted in realism, to different degrees, so the painting 'My Skin is Bare, My Skin is Theirs' stands out with its use of unusual, almost neon colours in controlled swirling motions to create an image of the body as its own galaxy.

New York's Susan Chen also has a notable presence due to the exciting paint textures and amusing banality of her work 'Chinese Take Out'. It speaks even louder given the forced domestic enclosure of recent times, and of course the adorable dog sharing dinner at the table, holding chop sticks, is a warmly charming addition. The light touch that's prevalent throughout the show is a real strength of Tovey's curation; of course there are serious themes here, or at the very least artists concerned with social issues of the day, but largely things are conveyed with either good humour or bright, vivid colours and compositions, giving us some light relief from doomscrolling and 24/7 news exposure. 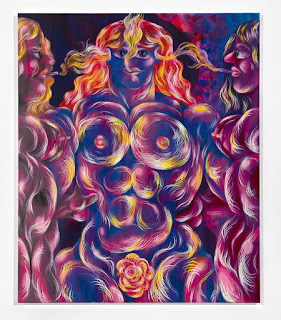