Bold Tendencies, situated at the top level of a car park in Peckham, south London, is part of a bubble in this part of town which evokes a wild ride of different emotions for me, and undoubtedly for many others that have observed south London's transformation in recent years. Watching this has polemically pulled parts of myself, my interests, and indeed my politics, in different directions. Peckham is one of the Poster Girls of gentrification, having gone from a culturally diverse neighbourhood, which it largely remains in parts, to a destination location for increasingly novel bars and similar enterprising venues. Needless to say, this is not new information, and surely the influx of new galleries attracts new audiences to the art scene, but realistically it is more likely that art audiences will travel to us, so seeing this as a form of high-brow community outreach may be a naive stretch. 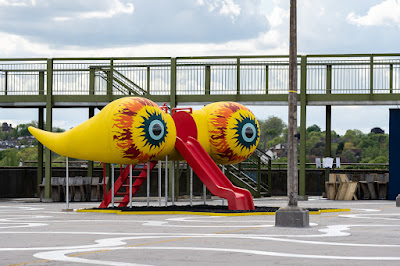 That being said, Bold Tendencies is a great, stand-out project for several reasons. Firstly, the combination of having the art in the open air in a public space is, objectively, good. Does it feel institutional? Yes, but I suppose there has to be some accountability in place for artworks that will be viewed by members of the public. The (albeit scarce) summer sun in London illuminates the works, as well as the now Insta-famous views across London. The difficult reality that Bold Tendencies is situated atop a musty and eerily quiet car park and, in what is something of a sick power play, looks down over communities faced with displacement as a result of the area's gentrification, is hard to ignore. This is not to say that the ruins of gentrification have to be the only thing we're allowed to think about when we come to Peckham, but for me and many other south London natives, it is always lingering in our minds. 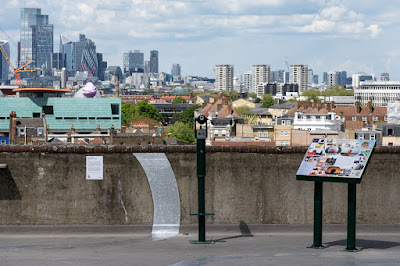 Installation view (on top of the mint green building to the left of the image): Andy Holden, In Praise of Folly, 2021. Bold Tendencies, London. Photo: Damian Griffiths.

Now onto the art, which despite the doom and gloom of the contextualisation above, is highly impressive. Bringing such incredible artists to Peckham is a fantastic opportunity for both art lovers and visitors of the adjoining bar, Frank's, alike. The works are suitably large in scale, with Andy Holden's 'In Praise of Folly' adding a bit of a Where's Wally element, in that it has been installed across the vista on top of Will Alsop's much-loved Peckham Library. Pleasingly, Harold Offeh's sculpture 'Hail the New Prophets', which is the first piece to be encountered as the viewer enters the outdoor space, incorporates a small slide. As an ode to the jazz musician Sun Ra this is a nicely playful element, and a pleasant gateway into thinking about Afrofuturism and the themes of freedom and adventure, as outlined by the artist. 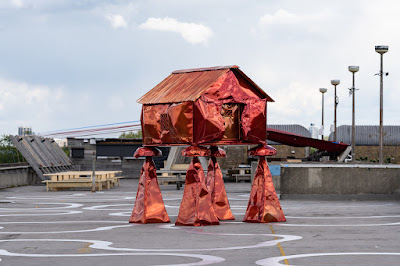 There are a few show-stoppers in the show, which as the press release states, looks at "what happens when our connection to nature - and to each other - frays and unravels, when architectures of the past fall to ruin, and who is and isn't included in the cities and homes that we call ours". One is Jesse Pollock's huge 'The Granary'; with its super-shiny facade and symbolism of the home, it is an easy win for curator and viewer alike. While many of the works were commissioned by Bold Tendencies, Pollock's piece feels most at home (if you excuse the pun) here. The press release of 'Arcadia' is long and heavy, and feels more like a catalogue text than something that will help ambivalent passers-by better understand the works. Ideas presented in the text are interesting and engaging, but feel like too much of a task for an exhibition which needs to be summarised as accessible and fun with socially conscious themes running throughout. 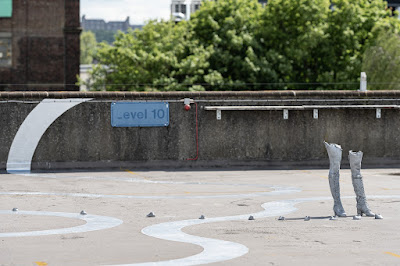 I had a lot of fun with Rebecca Ackroyd's work too, which is on a much smaller scale. Whereas Pollock's work involves squinting up to the sky, you can get on your knees to check out the detailing on this whimsical sculptural piece. I must say the accompanying text for each work, available on the Bold Tendencies website, is certainly helpful in illuminating the respective contexts. With Ackroyd's work, I learned that, "derived from the ancient French word 'la gogue', meaning "joy" or "happiness", the boots are an enduring symbol of the Swinging Sixties, representing rebellion, sexual promiscuity and freedom". The work is truly versatile, and powerfully commands attention despite being the smallest work in the show.

Finally, an honourary final shout-out to the bubblegum pink stairwell which sends you up to Bold Tendencies. I almost didn't want to mention it: you've seen it (if you haven't in real life, you've seen it on Instagram), I've seen it, it's given me headaches every time I've used it. However, it seems a deadpan cliché to write it off as a metaphorical flame, with every social media influencer in London being a moth. It's a permanent installation by designer Simon Whybray and with its very millennial and Gen Z-friendly title 'hi boo i love you', there is no denying that the work makes an impact. Your senses cannot ignore it, and if good art makes you feel something authentically, then we shouldn't dismiss the installation so readily. It has surely paid for itself since its conception in 2016, with all the free marketing from people using it as a selfie backdrop, and does evoke the mood to enjoy art, whether visitors are heading to the gallery or the bar. When we, as consumers of culture, are seeking out more of an experience than mere objects of desire, we have to acknowledge that Bold Tendencies has achieved this, making contemporary art quite literally a permanent feature in the landscape of the city. I feel like the project is something of a blueprint and look forward to seeing if a socially-driven edition might pop up in the near future. 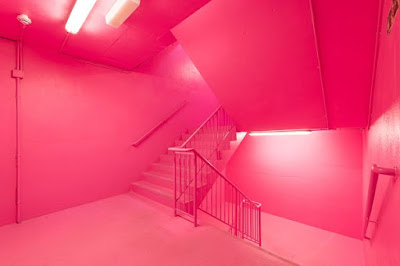