I came across the work of Alya Hatta at the recent undergraduate fine art degree show at Goldsmiths, University of London. Emerging from such uncertain times (to put it lightly), I wasn't sure what to expect from the show, given the lack of face-to-face teaching over the past year. That being said, it was generally a strong showing, with one or two artists really standing out. One was Alya, whose installation of painting and sculpture 'Always Greener' was on one of the top floors of Goldsmiths' Ben Pimlott Building. Its curation was incredibly polished and well executed, an impression made even before engaging properly with the art. I was fascinated by her exploration into Southeast Asian culture and identity, without it necessarily being the leading force; the initial reception of joy and fun seemed to transcend the subjective experience. Coming away from the degree show, her work stuck in my mind for weeks to come, so I was excited to be able to speak with her about her processes. 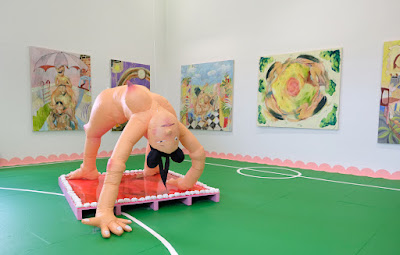 Installation view: Alya Hatta, Always Greener, 2021. 18-22 June 2021, Goldsmiths BA Fine Art degree show.
Image courtesy of the artist.
What has studying been like over the past 18 months? How did you manage to stay productive in the lead up to your degree show?

Being in art education over the past 18 months has meant that there was less in-person guidance and learning from tutors and other artists in the studios. The thing I missed most was definitely being in a productive collaborative environment. I do, however, believe that the isolation created room for growth, to be more independent and look for inspiration in the environment directly around me.

The shift to working from home was definitely difficult to adapt to - working with limited resources was one of my challenges. On the bright side I was able to focus much more on the digital aspect of my practice, which later informed my physical painting practice.

Productivity has always been something that I naturally have, I’m a generally motivated person and just the idea of my degree show was enough to keep me in check. Being in lockdown gave me lots of time to research a bunch of painters too, and it got me really inspired to make better paintings. I think this led to a turning point in my practice where I felt very conceptually genuine and content aesthetically, and so naturally I had a drive to explore this leading up to the degree show. 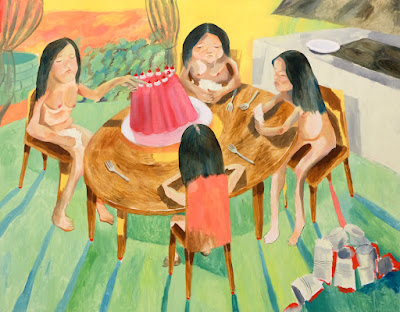 As you're based between London and Kuala Lumpur, what are the main differences in the art scenes in these cities?

In my experience, the main differences are probably the general openness and reactions to certain topics. Those which concern my work tend to be around nudity and the expression of sexuality, both of which are more normalised in London. Both cities have great underground arts scenes, dominated by the youth and pressing themes that don’t get talked about in the mainstream, especially in Malaysia; things concerning religion, sexuality, feminism etc. In addition to this, I’ve realised that in being a foreigner in this country, a lot of things feel less accessible compared to Malaysia where the arts community is smaller and I feel much more at home. I’ve also noticed that in London, it’s easier for me to break into spaces and communities that focus on the Asian female identity, and whilst my identity is an integral part to my work, I would like to sometimes be recognised as an artist before my gender and ethnic labels. These canons I fall into are less relevant in Malaysia.

I completely understand that leading with identity isn't always ideal. With it being such a driving force in your work, and given that Southeast Asian identity is so poorly represented in London's art scene, I'm keen to learn more. Which artists do you feel are leading the game and inspire you?

I feel the most inspired by the people I know and the conversations we have around the ideas of race and experiences, realising shared experiences and just bonding, crying and laughing over things we didn't realise were so common. I am part of a London-based Southeast Asian collective, Unamed Collective, and our members Yasmine Aminanda, Jordan Chan, Nurin Yusof, Rebecca Chang and Joe Cheng really all inspire me with the breadth of work they do and the inspection into everyday life as people of colour working with themes of identity and diaspora. Another really inspiring artist who explores the Cambodian-American diaspora is Anida Yoeu Ali, specifically her ongoing 'Buddhist Bug' work, where she uses humour to comment on her ‘Otherness’ by performing as a large orange bug across the world.

I’m also under a mentoring programme with my artist mentor Anurendra Jegadeva, who has been really inspiring with his f**k-it attitude, and imparting lots of wisdom in just being able to be brave and vulnerable all at the same time. He was also part of a group of artists to have first put Malaysia in the 2019 Venice Biennale, which is super inspiring to look up to. 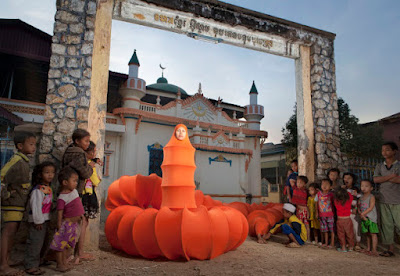 There is a vibrant and fun element to your work, and it really stood out at the Goldsmiths degree show. Do you use this purposefully as a tool to entice viewers to think about the deeper themes present? I'm thinking specifically about 'Sleaze Cake', the wonderful inflatable piece in your installation.

I’m really happy that you picked up on this because it’s a tool I try to incorporate in most of my artwork, consciously and subconsciously. Initially, the tendency to draw figures in a ‘childish’ or ‘naive’ fun way came from not wanting to do anything realistically, after having so much pressure to do so in high school, that plus the fact I’m really impatient when sketching down new ideas. I also fell in love with colour properly after my seminars with David Batchelor and reading his book ‘Chromophobia’.

As I started making more work and coming to terms with the intimate ideas, thoughts and experiences I wanted to share, I felt a lot more vulnerable, as one would, and so I think the way I draw and use colour definitely is a guise to make things a lot more approachable for others as well as myself, as making the work involves re-living moments and emotions. Thinking of making and viewing work as fun, first and foremost, is a way for me to insert myself into the work from a ‘safe’ distance - think this is something I use for myself more than anything.

In terms of an audience viewing my work, I like to go by the mantra that I want people to take something away from it, so if it's just a reactionary feeling of joy from the colours, shapes and forms then I’m happy with that. When I was around my space in the show, I did find that people were quite entertained by the inflatable, and I did like that this immediately brought people in to inspect the object. I was drawn to making that object because inflatables are such a fun, iconic and yummy object in my childhood. I love the curves of inflated objects. I think only when people inspect it closely do they realise the tension, frustration and discomfort the figure is in; I like this process of discovery! I think it mirrors real life: things might look greener on the other side but it could be the complete opposite. 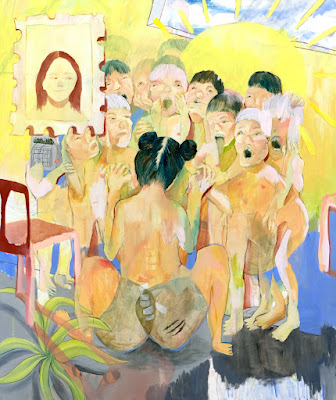 What was the response like to your degree show?

I had a great response to my degree show, at least by the amount of my contact cards that were taken away in the first couple of hours. I think with my whole install, the funniest thing I personally saw was people debating whether to step on my basketball court floors - I wanted to blur the boundary between art and play and I think this did it well. It was just funny to see people being so formal in a space that clearly demanded play,  it was a lot of "two hands behind the back walking around" until people realised they could just relax and enjoy the art and be happy in that space - which is all I could ask for!
Do you have any exciting projects coming up?
I’ve got a group show coming up in Malaysia at Wei-Ling Gallery, it’s centred around emerging artists and I’m super excited for that! In addition to my recent paintings and the inflatable, I’ve spent the summer working on smaller intimate paintings and drawings. I want my large work to converse with the small work and talk about things like intimacy and vulnerability. I’m kind of going about things the opposite way, it’s easier for me to ‘hide’ behind things like scale and colour, so it’s definitely a step forward. I'll be continuing my practice on the MA Painting at the Royal College of Art starting this autumn, so I’ll be pushing my image-making in all forms, trying to bridge painting and my digital work together too!
Check out Alya's work on her website: hatta.studio
Labels: degree show emerging art goldsmiths installation painting sculpture undergraduate