Ordinarily, I could safely say I am not drawn to shows of Minimalist work; maybe it's the modern art connotations of straight white male dominance (of course this is the case with most mediums and movements, but Minimalism does seem to be a real Poster Boy) or maybe it's the fairly simplistic aesthetic that doesn't excite me. Nonetheless, during my time in Brighton I went to check out the exhibition 'Object Q / The Pursuit of Happiness', featuring work by artists James William Murray and Garth Gratrix, based in Brighton and Blackpool respectively. I was compelled to visit Gallery DODO for this show due to its subtitle of 'On Queer Verticality', which is a fascinatingly insightful interview between the artists and writer Amie Corry. 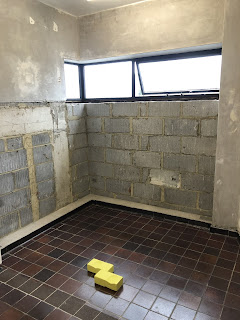 The show's press release is a fabulous piece of writing, as is the accompanying interview. For me, this is essential to contextualise what is an otherwise sparse exhibition, and it has been done in an interesting and creative way. 'Object Q / The Pursuit of Happiness' is described as "a coastal cultural exchange between two artists with themes of queer materiality", yet initially I couldn't help but be confused by the connection between Minimalism and a queer materiality; to me the two labels are in direct conflict. 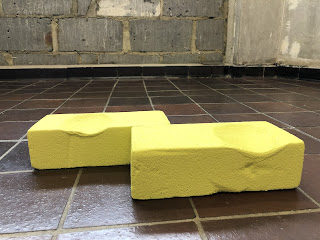 You'll see that I have outlined some of my ideas before talking about the actual art, which makes sense given the need for contextual grounding in this exhibition, and my initial hesitance towards the Minimalist aesthetic in the works. The first piece to entice the viewer's attention is 'Pursuit of Happiness' by Gareth Gratrix, a piece comprised of two yellow breezeblocks on the ground in the middle of the space, demarcated by the artist's body with a knee groove made in each block. The show's press release enquires as to whether the bodily owner of the knee was making a proposal, undertaking a sexual act or taking the knee as a political gesture. Here we see the physicality of an 'empty gesture'. Without context or substantial understanding, the artist is present but the gesture is empty. The void plays a significant role in queer history and visibility, or lack thereof, and while it is somehow pleasing to be able to make this connection in the show, it is packed with real emotional potency.

I thought I may have been out of my depth analysing Minimalist art, as the Big Dogs of Minimalist modern art (Carl Andre, Sol LeWitt, Donald Judd et al.) are not my area of expertise, nor my area of real interest. However I must say I am en route to conversion with this exhibition. The angle of queer art, queer making and queer theory adds a dimension that certainly enhances it, and brings it into contemporary consciousness in a considered way. I noticed that my provisional hesitation and realisation of interest prompted me to change the way in which I approach art; I'm always keen to challenge myself so this was something I welcomed. With Instagram as such a huge tool for discovering new art, what would happen if we took away the visual expectations, and entered an exhibition not knowing what awaits us? In doing this, I have truly transformed my outlook, and have pushed my ability to think creatively, so will certainly be taking this technique forward.

I had so many different thoughts upon leaving the show, all of which I was happy to have. Even the gallery intervention, cited as one of the works, of a window left open by nine inches, would have been something that I might have been sceptical of in another setting (although it did remind me of the epic Martin Creed retrospective at Hayward Gallery a few years back). However, a contemporary queer spin on Minimalism had me keen to understand and unpack more. Gallery DODO itself being a tiny room with exposed brickwork in amongst the larger vicinity of the Phoenix Art Space adds further allure and intrigue. Of course it's hidden! Of course it's up three flights of stairs! Of course you have to book an appointment to see the works! Put simply, I had a great experience navigating the space, and it felt like a little queer secret, which I was in on. I was given another chance to experience Minimalism after spending so long feeling like it wasn't art that was made for me. Identifying, challenging and transforming these thoughts is not only how I want to feel, but what I want to reproduce in my own art writing. I have been inspired far beyond my own expectations. 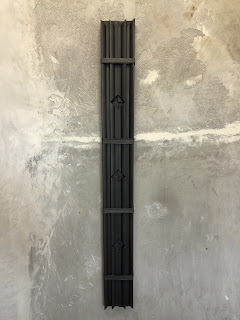