In England, galleries were permitted to open again on 12 April after months of pandemic-induced closure. In that time, many of us had been checking out art predominantly through Instagram and (the now-dreaded) online viewing rooms. I had been to a couple of other shows in the days before heading to Peckham's Bosse & Baum, but hadn't had my interest set alight just yet. But I was glad to finally be awoken from my screen-addled slumber, as 'Fertile Spoon' was the "welcome back!" I had been craving. The doors were flung open and the sunshine was pouring in as I entered the space after making my booking online, and I was instantly pleased to be seeing art among other people. 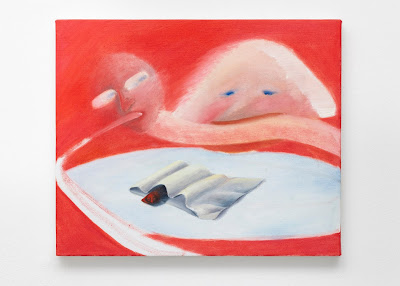 'Fertile Spoon' is a two-person exhibition between contemporary artist Mary Stephenson, who is currently studying at the Royal Academy Schools, and Grace Pailthorpe, a twentieth-century doctor, surgeon, psychoanalyst and painter. From this pitch alone, I was sold. In terms of effective exhibition-making, having two artists in some form of dialogue is usually the best way of weaving a story, whether the focus is on a thread running between the artists' work or simply that the two complement each other. For Stephenson and Pailthorpe, it is both, with strong psychoanalytical motifs and dream-like aesthetics and tones radiating throughout. The gallery itself has also been punctuated with accent blocks on particular walls. With Pailthorpe's work on loan for the show, there is certainly a museum quality to 'Fertile Spoon', and it is clear that a great deal of research has gone into the pairing. 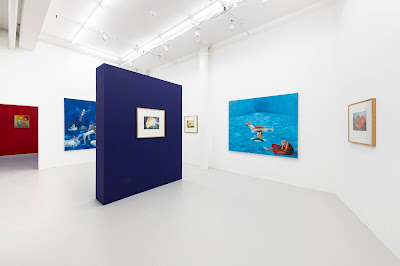 One particularly interesting element of both artists' work is that neither feel especially grounded in one moment in time. Stephenson's work could have easily been produced in the twentieth century, especially the smaller works such as 'Napkin', pictured above, and my personal favourite, 'White Linens II', (which I couldn't stop thinking about long after leaving the gallery) and similarly if Pailthorpe was being touted as an emerging artist in 2021, you'd certainly believe it. I truly appreciated the ways in which the artists are similar in their subject matter, in a somewhat abstract way, whilst at the same time their painting styles are so different. The bold, deep blues in Stephenson's work are engulfing in her larger pieces; that they are depicting vast bodies of water is entrancing, perhaps amplified by the fact that, as a city girl, I have not been near the ocean for a long time. It is hard to convey the richness of the works through photographic documentation, as I found while I was there, as I so desperately wanted to capture the feeling the paintings, particularly 'Untitled' from 2020, were evoking for me. 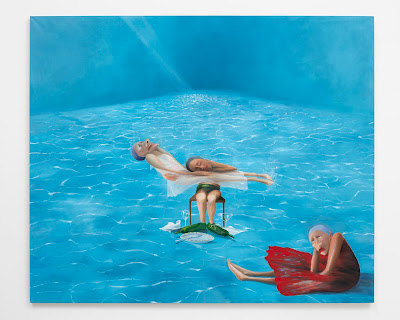 Psychoanalysis as a recurring theme is a welcome one at a time where mental health is increasingly becoming an inescapable priority. 'Untitled', pictured above, is perhaps the most startlingly emotive on the subject. While the blues are swirling, active and beautiful, the individual faces and expressions held by the painting's three figures are haunting, conveying a potential sense of severe pain and trauma. We see abandonment, shame and mourning, all implied but not explicitly reproduced. This is a stunning form of storytelling through painting, one that feels all the more special as we experience a 'post-scarcity culture', whereby in the West we have no shortage of shallow, quick-fix information and (to an extent) resources, with ever-decreasing value due to their availability. Vast expanses of watery space fused with human bodies imbued with trauma and pain, in the large scale of 180cm x 150cm, make for a truly arresting experience, one that is simply not possible through a screen. 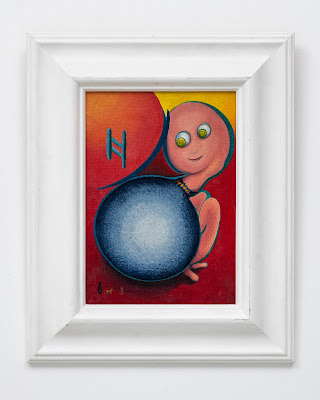 Grace Pailthorpe, 10th December 1938, 1938. Oil on canvas, 55cm x 45cm. Courtesy James Birch and Bosse & Baum. Photo credit: Damian Griffiths.
The exhibition comes with a supporting text by Chloe Nahum, who curated the show with the gallery. In it we are informed that in 1939, Grace Pailthorpe wrote that "the story may not be consciously understood by the onlooker; but "deep speaks to deep" - the unconscious of the spectator responds to that of the artist". Deep speaks to deep - what an incredible invite for pause. This is a maxim that might be reflected in our interpersonal relationships, as well as an experience with art; for example, if we share a trauma or a deep truth with someone we feel we trust, yet their response is shallow or nonplussed. This does not mean they should be maligned as a person, it may just signify that the two spiritual or emotional depths are not compatible. 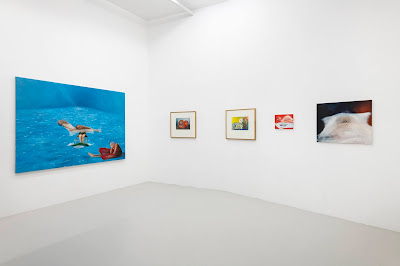 Mary Stephenson and Grace Pailthorpe, Fertile Spoon, 2021, Installation View, Courtesy of Bosse & Baum. Photo credits: Damian Griffiths.
I am so pleased to have returned to seeing art in real life, even moreso after encountering this exhibition. Painting is always my medium of choice, but there is so much more that brought me to 'Fertile Spoon' in the first instance, and it certainly delivered on my expectations. Mystical yet familiar beings, most of whom are in either physical or emotional isolation, are united at every corner of the space. Despair also emerges in the works, but again this is not in a way that is affronting and looking to weigh the viewer down into its dark, murky depths; instead it is exposed as a small part of a wider image, allowing for greater perspective. Here we see despair as an emotion, not a disorder. Over the past year, many of us have felt that we have lost, whether permanently or not, a part of ourselves; the works in 'Fertile Spoon' remind us that we are whole, we are together, and we are multifaceted, capable of feeling, and being, so much more than we may initially realise.
Labels: 20th century blue oil paint painting peckham psychoanalysis south london surrealism