I first encountered the work of London-based artist James Irwin when I visited his solo exhibition 'Listening to Xanax' back in 2018, at Gossamer Fog, which is one of my favourite galleries. We've kept in touch since I wrote that review three years ago, and at the moment his Instagram is a great place to check out his new work. Here we discuss Glitch Ethics, mental health and the art world's ongoing aversion to new technologies. James also makes me think about the difference between art that is interested in the glitch, and art that is in itself "glitchy".

You're doing your PhD on the point at which code becomes image, and your work is so aesthetically concerned with the glitch and, perhaps, technological malfunction. How long has your practice been interested in this?

I wouldn't say that I'm trying to make work that looks glitchy, but I'm definitely interested in the 'glitch ethic' of doing things wrong as a way of seeing them in a new light. It’s when slippages happen that things start to get interesting I think. What interests me about the glitch thing, and has done for a long time, although I wouldn't refer to my work as Glitch Art, is trying to understand the plane where the world around us is translated digitally. The glitch here is a breakdown in how we communicate with machines, and shows a misunderstanding on our part. It's not technological malfunction. In that space though, where the unintentional happens, there's room for seeing our relationship with computers - or the world in general - in a different way, I think, and the question of agency is really brought into focus or has the potential to be. I like the idea that we inhabit digital reality as we're extended through it and become cyborg. I think we should embrace it and look beyond our bodies. I've been interested in building abstract models as ways of seeing the world ever since I learnt to be an artist at art school on my BA in Newcastle about fifteen years ago. My practice was always positioned outside the body, but in a way that considers its relationship to the world. My roots are in Minimal sculpture and kinetic art, where objects help us to see the corporeal in ways that exist outside of us. Digital media has become the tool that I do this through. It's the language of our times. My practice has developed alongside the development of the internet and smartphones, so I see it as natural I guess. 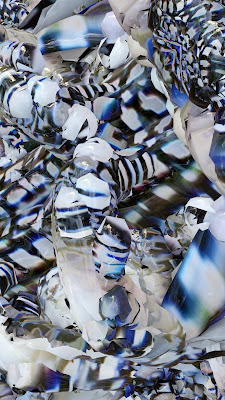 Which artists were you influenced by when making work of this aesthetic?

I'm not necessarily influenced by artists who make work that looks like mine. From when I was at Newcastle I would say my main influences were Donald Judd, Robert Irwin, Eva Hesse and Bruce Nauman. I'm really into Maggie Roberts' work at the moment and how she looks into extending our subjectivity beyond this finite idea that we have of ourselves - looking for different ontological models in her Becoming Octopus series. She embraces digital media as a voice and seems so natural within it, which I think is really cool. Other recent influences are Anna Barham, for how she works with text, and Clunie Ried's video work which I admire for how it looks and feels. How she uses content is a long way from how I am able to. I don't tend to work with images that are that personal to me, but use visual language in a more removed way. That might change though!

When I first encountered your work in 2018, the pieces were very focused on anxiety. Can you talk a bit about how you've used technology, and different media, to convey complex contemporary experiences with mental health?

That show was the first time I'd dealt with things that affect me so personally through my work. I made a set of images on holographic paper for that show. They were a sort of rupture between bodily and machinic processes. I was working on top of digital images that I had UV printed onto the paper in permanent marker pens, and would rub them back in areas with meths to remove and break down the images. One of the works also has a drawing by my little boy included in it, which was digitised, made into a sticker and layered on top. A drawing he made also found its way into a video in the space. There were robots in the show on table tops, which were connected via wifi to a recording of me breathing. They were there to show our entangled position with tech and create a feeling of techno-anxiety. I wanted to put the robots in this precarious position and set up the possibility of them perhaps falling off the tables. I had forgotten to program them to stop communicating with each other when the batteries ran out, so one of them did fall once and still has a scuff on it! The second room at Gossamer Fog was a two-channel video installation, with the screens placed back-to-back in the centre of the space and a strobe light intermittently breaking up the darkness in the room. That was more explicitly concerned with anxiety through the content. I used GIFs that I had found online that have this faux-therapeutic quality and used the screen as a way of bringing the animations together. The second channel was made using a looped sound recording from a mindfulness meditation app of this guy repeating the phrase “in through the nose, out through the mouth”. Each time the phrase was repeated I used Ableton to switch the tone, and Google Docs speech-to-text function to translate the warped audio into screwed text on the screen. That space was kind of scary. People thought it was like the experience of a come down, which I liked! I’ve started my PhD since the show, so haven’t focused much on the relationship between mental health and art making specifically since then. It’s working it’s way in though as I’m looking more into how my own subjectivity is changed by interfacing with screens. 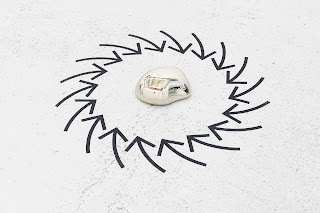 I remember around ten years ago the idea of 'Post-Internet Art' was huge, it seemed to be everywhere, especially in the South London art scene. How has that taken shape in the years since, and did it have any impact on the art you were making?

I wouldn't say I was influenced by any of it directly. I've always felt a bit outside of things. I did a masters at Goldsmiths in the computing department, in a course called Computational Studio Arts, where we learnt how to code and do physical computing stuff with Arduinos. My work then was all about how disconnected physical objects were compared to networked culture, which was mirrored in how slow the galleries were to pick up work that dealt with what was happening digitally in the outside world. I did a show at Space In Between in 2011 that tried to deal with those ideas - works that were disconnected, inert sculptural objects about networked culture as a way of fitting them into a gallery at the time. Since then there has been a big uptake in the willingness of galleries to show digital media; a few years ago it was everywhere, and then around the same time there was all the work that dealt with material stuff, like Aaron Angell’s ceramics, which sort of kicked against the internet as it’s perceived as immaterial. Instagram has obviously had a massive impact on how people share their work. I'm not sure whether it's a good or bad thing yet, but I find it really useful as a tool for thinking through and getting my work out. It introduces me to other people with similar interests, or who are working in similar media. I doubt the Post-Internet Art thing would have passed me by if Instagram were around then like it is now... 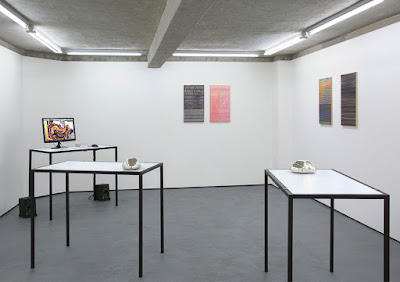 In her manifesto on 'Glitch Feminism', Legacy Russell repeatedly talks about becoming your avatar, and the online world and the real world melding together and becoming synonymous. Would you say there are any autobiographical elements to your work?

I’ve just started reading it, but what you say reminds me of reading Neal Stevenson’s 1992 novel Snow Crash, where the distinction between cyberspace - the Metaverse - and physical reality blur and become more entangled and harder to tell apart as the book progresses. Yes there are definitely autobiographical elements to what I do, I don’t think I can see them for what they are though, I’m too tied up with them. I’ve been writing recently, observational stuff describing and paraphrasing my surroundings. The tone is flat and quite devoid of emotion. I think it’s because of the antidepressants that I take, but how can I be sure? With the show at Gossamer Fog a few years ago I was trying to make work about anxiety, which is something personal to me as I’ve lived with anxiety for the last 20 years. It’s controlled now, I’ve just stopped doing therapy, which I was doing during the 'Listening to Xanax' show (I think the therapy is what helped me to make the work), and the Sertraline really helps. I think it’s just something my body needs, and I feel weird talking about it but I guess that reflects how mental health medication is still stigmatised. The tablets I take every day have this agency now, which I wonder if I can see in the writing and may be there in the image based practice as well? I’m not the kind of person who would ever put myself at the centre of my practice, say like Erica Scourti does for example. I don’t think my work needs to be that direct, and I’m fine with it being mediated by images that come out of computers.

I think contemporary art shies away from hyper-digital images, or it’s definitely been really slow to embrace them, distrusting even. I want to use them as part of me, and have made a conscious effort recently to try and make things more and more digital to acknowledge these images as being human and relating to us. We need to work with these things to understand them more and art is the perfect space to provide that criticality. It’s totally necessary I think, as our ideas of ourselves are becoming more and more cyborg because of our phones and art needs to provide the space to help us reflect on that and slow things down. But we need to use the language of these technologies to do so. Art avoids it because of a fear of technology, I think it threatens people because they don’t understand it and it’s safer to shy away, revert to ceramics and bury your head in theory! But we just need to accept these technologies as being part of us and try and see beyond this finite, closeted idea we have of ourselves as humans, and lose those insecurities that we will be superseded by AI or whatever. I used to try and slow technology down through the art that I make, like with this piece I made in 2011 that uses radar absorbent material (RAM) to create a cube void of wireless internet in a gallery space. Now I try and work with the speed of the tech and use the critical space that art occupies and those privileges as a way of slowing things down and reflecting on them. But it’s not like I’m making things totally at the forefront of technology, I just try to use everyday digital tools in a way that reflects on what’s happening at this hybrid space at the threshold of the screen. 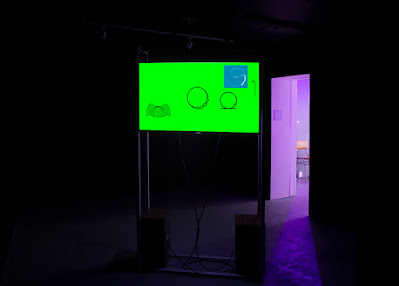