Katya Lewis is an artist whose work I first discovered when her stunning paintings were exhibited at the Royal Academy Schools degree show back in 2017. I was immediately drawn to them with their elemental aesthetic, and the quietness that makes time stop still. This is a really unique quality when we are used to over-stimulation and over-saturation, and the idea of Slow Looking is something I am looking forward to taking into my own curatorial practice, creating temporary environments and microcosms rather than static shows. Experiencing Katya's work in the flesh has certainly contributed to this attitude, having evidently made a lasting impression on me in the four years since encountering it. In our chat, I was thrilled to learn more about her practice and see where our ideas might align.

What has your art-making journey been like so far? Have you always used paint in your practice?

My art-making journey so far has been and continues to be, identity-defining. My work is able to stand for me, speak for me; it evidences my experience. I am nothing without my work. It is my way of being in the world.

I began using paint in my practice rather later than most (painters). I have always drawn though I draw little now because I find painting more communicable through the body. The stain-like surfaces of the paintings I produce cover and smear, concealing, revealing, residues or traces of performative action through touch.

I learned what I needed to, about painting as a field, during my time as an undergraduate at University of Reading. More difficultly, through the work being seen, my attention became drawn to something I had not been aware of: its unspoken unconscious power. I had understood the work’s power materially and conceptually; that was my interest, my reason for making it. However, it seemed others without exception, felt it contained a deep personal resonance. I reacted to this at first and for some time to come. I didn’t want such a thing to be there; I didn’t want to be in my work. I didn’t think it was right to be, but far more challenging I didn’t want to see myself. All I had wanted was to be able to think, through painting. It was this that I took to the RA [Royal Academy Schools]. 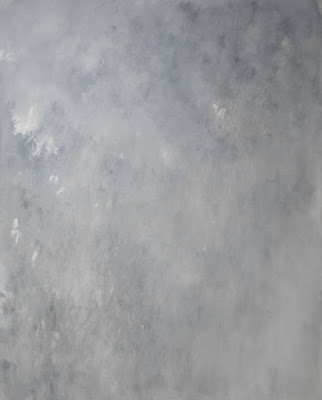 Can you touch upon your relationship with drawing?

Drawing remains in how I understand space and form, but is not overt. I may return to drawing in a new body of work. I am currently thinking through what that would mean. I have a different, quite difficult emotional attachment to drawing. It demands a slightly different engagement. I have a lot to work out, but I think perhaps that could be the work.

It's so interesting hearing about how you got to this stage. How about your influences? I infer inspiration from British weather but would love to know what your point of departure is, or has been, before you start making.

The first part I can answer easily – I understand you referring to inspiration from British weather, though for me, it is more the air. The air on the body, the air around the body, the air drawn into the body, and the air exhaled.

I was to travel a long way at the RA. The first thing I was called on (by senior tutor Brian Griffiths who took a moment to throw this at me as he walked by my space in the first term) was that my work ‘was all that and everything, (but) it was as if it didn’t need anyone’. I was to face similar challenges in the crits. So architectural and contained were the paintings, they would split the room. Some would say they felt closed, they couldn’t get ‘into’ them. 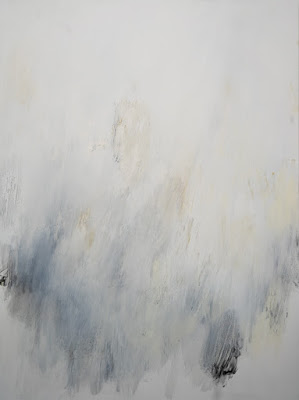 How did you take this critique on?

I didn’t mind that the paintings had split the room. My work is what it is, it has its own voice, its own sense. I like that it has that, it has to. But it mattered to me how they found the work and what they said. So I held the criticism, kept it close as I thought, and worked. And still, (the other side of the room) spoke of personal resonance.

I took a risk. I stopped painting. I made photographic prints which were made into books. Later I began to write. This work was autobiographical in tone, an attempt to be with what it was that, I hypothesised, was most probably present in the paintings. I found a way to articulate the idea that was forming, by thinking through gesture. It was gesture that defined the paintings and it might be gesture that held the resonance. This became my enquiry and I began again to paint. In the crits, to speak of my process I began to speak of ‘how body and place can be thought to hold memory, and how memory is inscribed’.

Who are, or have been, your artist influences?

People often bring Turner to my work and I understand why they do, but he is not someone I would particularly look to. He was however, one of my earliest experiences of seeing painting or any art at all; his was the first painting to move me so in this way he has been pivotal, in my desire to paint and my belief in paint(ing). 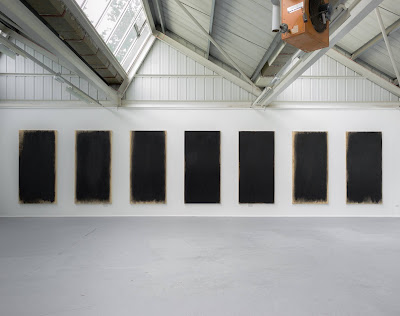 There is a really arresting quietness to your work, are you inspired at all by music? If so, what genre?

Thank you. I need quiet to make the work. When I’m painting, I go to sleep with the surfaces of the paintings rolling across my eyelids. It requires absolute absorption. If there is music, it is in the gesture, the laying down of the marks.

I think of my primary medium as being awareness, through touch. Made using the lightest contact of the brush, rag, or frequently the hand itself, the relationship that develops is acutely sensitive and responsive. The lightness of one mark informs the relative heaviness of those that follow, making for a kind of symphony. This is the process by which the paintings become annotated or inscribed.

I suffer from Complex Post Traumatic Stress Disorder and actual music is a trigger for the flashbacks and dissociative episodes my condition causes. Trauma memories are held in the body, and music I suppose, acts on it. Music is, anyhow, mostly overwhelming to me. I would like this to change. I hope to be able to make it different. 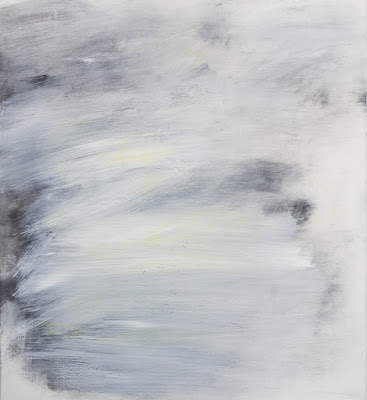 That forms a really poignant connection between quietness and your work; thank you for sharing that with me. I suppose this was something that you were able to explore over your three years at the Royal Academy Schools? What was it like studying there?

Studying at the Royal Academy Schools was rich, transformative, 24/7; from it I have made my practice, and I was given a cohort for life. I was allowed incredible holding and I could be vulnerable there. Nowhere else could I have made myself the kind of painter I am now. 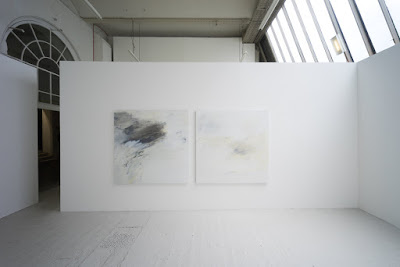 Installation view of Katya Lewis' work at the Royal Academy Schools degree show 2017, London. Photo credit: D Jun-Yu Low
Finally, in your dream two-person show, which artist living or dead would you want to exhibit with?

For an imaginary two-person show [Cy] Twombly might be interesting but I think it would have to be Ana Mendieta, I find her work profound. She feels like a ghost in my practice. She is certainly someone I want to let be around. 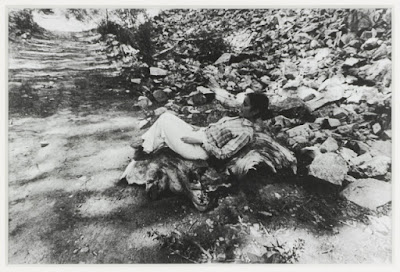