Burial, Four Tet, Thom Yorke
Her Revolution
2020
EP: 'Her Revolution / His Rope'
Licensed to YouTube by Beggars (on behalf of XL Recordings)

With a release in mid-December in arguably one of the most depressing years in (Western) recent memory, the expectations for a new Burial track were surely that it will fit in snugly with the 'brand' of 2020. This collaboration with fellow London producer Four Tet is not a new one, stretching back almost a decade with releases such as similarly heartbreaking 'Nova', a dark electronic track with tinges of drum 'n' bass and jungle music, much like the rest of Burial's oeuvre. For me, Burial's music is always reminiscent of winter, dark forests and misty landscapes, whereas independently Four Tet tends to produce much more summery tunes; seeing his now infamous light show at Alexandra Palace in 2019 was a much more upbeat experience than the state Burial will leave you in: pensive, perhaps miserable, but really somewhere on the 'sublime' spectrum.

So, at the end of last week fans were offered the latest collaboration between Burial, Four Tet and the Radiohead frontman, Thom Yorke, on XL Recordings, a two-track piece comprising of 'His Rope' and 'Her Revolution'. I will admit that their Spring EP fell a little flat for me, so I was looking forward to hearing these new tracks. Like much of Burial's collaborative work, they are slow burners, and tunes that demand your full attention. I gave it a first listen while walking through the woods, and found it to be a delicately haunting but heart-opening experience.

'Her Revolution' is the EP's first track, and starts almost as if the listener has interrupted something, feeling incredibly elegiac. A slightly crackly sound quality, like an old vinyl, almost like an aural symbol of interference, of a significant physical distance. We are all feeling it at the moment, but it is still novel for it to translate so well into music. There are different parts to the song, almost fragmented to the point that it is rather uncomfortable to listen to, thus demanding your attention to unpick each element.

Much like every track he features on, the vocals of Thom Yorke are like an ethereal spirit talking directly to the listener, but in a psychedelic language one doesn't quite understand. Lyrics are long drawn out, against what I believe to be a piano and sitar background which isn't a smooth fit with Yorke's vocals. The messiness of the track, whilst remaining at a slow BPM tempo, makes the final 1:10 all the sweeter, especially the final thirty seconds. In fact it's even less, as the sitar is finally given centre stage alongside dreamy Yorke vocals. I could listen to it on loop for hours, and instantly felt the goosebump effect. In the middle of the woods I looked up; this outro feels like an ode to everything we have, everything that's possible, yet at the same time desperately sad.

The title of the second track would suggest a dialogue with the first, using the classic 'his and hers' paradigm, and the two songs are beautifully complementary. Checking out the online commentary when tracks are freshly released is always interesting, as you'll find the die-hard fans' first reactions straight out the gate. User Jammy Dodger saying that "those four repeating notes on the sitar are heart-breaking, so emblematic of Indian classical music", is testament to Burial's gift for not only sampling but re-interpreting a range of global genres. Something I did not expect to encounter is the below from user MightyMitoMaria, whose comment is, at time of writing, the highest rated on the video for 'His Rope': 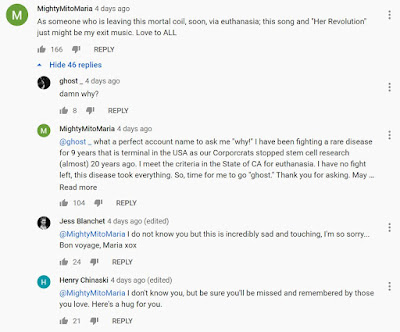 Comment reads: "As someone who is leaving this mortal coil, soon, via euthanasia; this song and 'Her Revolution' just might be my exit music. Love to ALL".
I was already experiencing a dark day when I came across this comment, but somehow, despite there being no way of verifying whether the comment was real, another layer to the listening experience was born. This year we have all been forcibly faced with the thought of mortality, and mutual care for people we will neither meet nor ever know. Perhaps it is with this in mind that this comment hit me hard, then listening to 'Her Revolution' again and hearing that stunning outro of classical sitar, which in itself is so poignant; it is around twenty seconds long in a song of over six minutes in total. It is fleeting but it is beautiful and we desperately try to hold onto it, attempting to listen to it again. We can rewind the track a few seconds, and just listen to the outro, but while in isolation it is materially the same, it is a work of art in its holistic entirety. I will struggle to find a better metaphor for love and time in 2020.
Labels: electronic melancholy music south london