(Edit: I originally wrote this over the weekend under the assumption that the viewing rooms were open from 19th to 26th June. As I edit in the early hours of Friday 26th, the fair has closed with little trace of it ever having been open... Alas, here are my thoughts on the online fair)
Last weekend I looked at the online iteration of Art Basel, which has rebranded somewhat to an Online Viewing Room edition instead of its usual runs in Hong Kong, Miami Beach and Basel. It is one of the art fair highlights of the year, and certainly has a big reputation to maintain as well as large pressure to keep selling artworks despite the world being on the cusp of the biggest economic downturn in a century. As I'm sure I've previously said, online counterparts to high-profile events have generally been quite disappointing, and are especially so if you have a low attention span. In the case of Art Basel, there are an eye-watering 282 viewing rooms this year, so I was intrigued to know which unfortunate souls have been listed last, as quite frankly while looking at 282 of anything in one sitting (although once logged in you can revisit) it is hard to keep momentum up.

Rebecca Horn, The Lover's Bed, 1990. Installation: iron bed frame, butterfly wings, metal constructions, motor, dimensions variable. Galerie Thomas Schulter, Berlin.
Most viewing rooms also have a title, so you can also use that as some kind of leverage as to whether you'll bother "entering" the virtual booth. I noticed that two major London galleries are among the first: Stephen Friedman and Thomas Dane. I have been to both spaces multiple times back in the real world, so decided to miss them out this time. As I enter the viewing room of Berlin's Galerie Thomas Schulte and read its accompanying description of the room's "curation", I start to think that the fair organisers really should have limited exhibitor numbers; if you want to fully immerse yourself in the fair, you have to spent at least a good ten minutes in each room. Multiply that by 282 galleries and you're looking at a solid 47 hours in front of the screen. Thomas Schulte's offering, 'Conference of the Birds' is inspired by a 12th century poem of the same name and has some great works. Transparency in pricing is one benefit to online fairs, and you can also see which works have already sold without having to interact with any gallerists directly. Rebecca Horn's installation 'The Lover's Bed' instantly stands out; there is a certain appeal to this work, the readymade combined with the natural elements of (hopefully sustainably and responsibly sourced) butterfly wings are always a visually pleasing mix. The same goes for Polish artist Maria Loboda's sculpture 'Hearing the Omniabsence' from 2009, comprised of a High Fidelity sound system covered in fake snow. 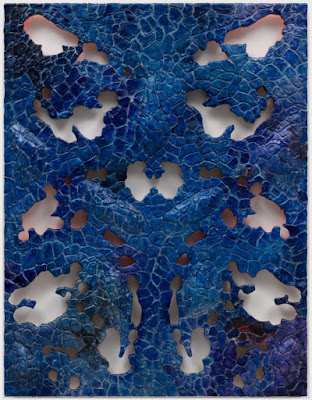 Ajay Kurian, Xenomorph, 2020. Epoxy clay, spray paint, wood, Plasti Dip spray, 101.6cm x 78.7cm x 5.1cm. 47 Canal, New York.
There were several pieces in the New York gallery 47 Canal's virtual booth which appealed to me personally, as I am always drawn to the visual impact of texture. New York-based Ajay Kurian is a great example of this; I love the combination of painting and sculpture and this has been done exquisitely in his 2020 painting 'Xenomorph'. With clay, negative space and a richly blue patterned texture, it has a real allure to it. Anicka Yi's painterly sculptures inspired by the world's ecosystems are also definitely worth checking out; at a cool £70,000, I would have loved to see Yi's work in the flesh. In terms of themes, I'm a big fan of what Galerie Sabine Knust from Munich have done, which at this point was the closest concept to an actual exhibition. 'Nature as Concept' explores our relationship with the natural world; perhaps not in the most up-to-date way, but it's a safe theme to follow and enjoy; Katharina Sieverding's print 'Edition IX (Blue)' is a favourite, again in my favourite blue hue. 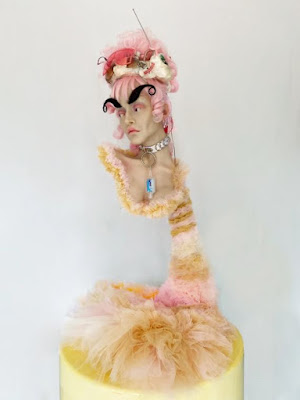 Casja von Zeipel, Festive attire encouraged (Zoom), 2020. Silicon, metal base, synthetic hair, tulle mesh, glass eyes, sunglasses, choker, purell hand sanitiser, fur rabbit, USB car charger, headphones, walkie-talkie, pedicure toe separator, rubber scrunchies, glass bong, luggage name tag, ribbons, pacifier, earrings, fake nails; 127cm x 55.9cm x 55.9cm. Company Gallery, New York.
New York's Company Gallery were another favourite, and were one of the only galleries to address current, urgent social issues directly, which isn't a huge surprise in a large-scale art fair like this but it still makes for more interesting viewing using the critical eye. I've seen Casja von Zeipel's work before and it is so aesthetically pleasing that I have to mention it here. 'Festive attire encouraged (Zoom)' is bang on the moment, showcasing the comical nature of how we can only really be seen from the chest up; the sculpture is an ornately decorated head with a large gap underneath. It doesn't take much foresight to see that this will be an ongoing theme in new works to come in the near future. Rather worryingly, 'fur rabbit' is listed in the material description, and as with Rebecca Horn's previously mentioned work, I would hope that we are not about to see a renewed trend of using real fur in art; it's absolutely unnecessary. On a brighter note, Jonathan Lyndon Chase's paintings are a real and timely highlight of the whole fair, depicting queer black love in rich hues that draw you in to tell frank, raw and beautiful stories through paint. 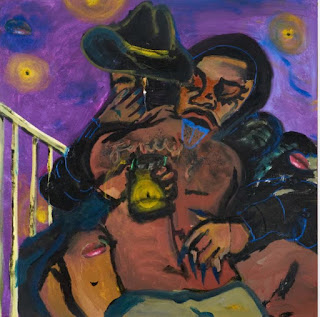 Jonathan Lyndon Chase, lightning bugs and hugs, 2020. Acrylic, spray paint on canvas, 91.4cm x 91.4cm. Company Gallery, New York
I am still fairly confused by the ordering of the galleries in the listing, as some of the international, high-powered names you'd expect to be at the top of the bill were spotted near the end. In a listing of over two hundred galleries, it becomes almost an arbitrary task of picking viewing rooms at random. Although technically the art world still has to keep turning and adapting during global moments of difficulty and pain, the likes of which a generation has not seen before, the timing for Art Basel Online doesn't quite sit right, especially as there is little to no mention of Black Lives Matter, nor anything particularly active in social justice or reform. I would like to think that the role of the art fair is acting here as some kind of respite from the real world, as opposed to being rather boldly tone-deaf. Reluctantly putting this aside, some of the work is certainly worth experiencing, and I am glad I discovered and found several of these artists again, especially in the comfort of my own home. There is an appropriate amount of text to read to understand the rationale behind most of the artists' work and galleries' thematic ideas, so overall is a nice little way to spend an hour or two if you need a break from the news and the outside world.
Labels: acrylic art art fair Berlin birds blue contemporary art fine art furniture German group show international oil paint online paint painting print