For 2020, and especially while many arts and cultural centres are temporarily closed due to a health pandemic, I have decided to start writing about music. I have always had very profound, often out-of-body responses to certain tracks and have often found it quite alienating to discuss, especially with people who do not share my taste in music. So it is with that that I am challenging myself to convey how music makes me feel and dissect particular songs in perhaps a similar way that I would with an artwork. For this first piece I am discussing a recent release but this is by no means the standard. There is no doubting that music is art, and while I will still write about visual art, I feel ready to unpack my music collection and ask: what makes this track so good?

'Lost in Yesterday' was the second track I encountered from Tame Impala's latest album, 'The Slow Rush', which came out early this year. Tame Impala has a reputation for being stupidly cool whilst remaining fairly easy listening in terms of pop music, a fact that is hilariously apt for this one-man band (sort of) whose name is actually Kevin Parker. I was alerted to the track's release by a notification on Spotify, prompted by the fact that I have played Tame Impala's track 'Brand New Person (Same Old Mistakes)' around a thousand times in the past year. I was sat on the bus heading to work with quite a few things on my mind, when I first heard that whirling synth intro.

The nature of that synth feels like someone has just opened a door and is showing you a new world - yes, the new material hasn't shunned Parker's psychedelic roots. Then, a bassline that is so punchy yet jolly it absolutely throws you. It feels like a multipurpose accessory: I could skip around the room to it, I could dance at the club (if the DJ were to drop Tame Impala in some bizarre twist) and all while being earphone friendly. It is a completely elevating sound.

When we were livin' in squalor, wasn't it Heaven?
Back when we used to get on it four out of seven
Now even though that was a time I hated from day one
Eventually, terrible memories turn into great ones

Lyrics instantly speak to us as we reminisce about our own past, about lost love and yearning for a time gone by. This was exactly the frame of mind I was in when I happened upon this song and its aptness struck me and moved me in an undeniable way. I know that music affects people differently but when tracks like this come into my life I develop a highly emotional response, being transported, almost tour-guided, through my own memories, emotions and anxieties. Every 'what if?' was suddenly bobbed back to the surface after years of being pushed down.

The way that the song flows is quite extraordinary; intro to verse to bridge to chorus feels like travelling through the organised chaos of a river. There is one point in the song in which there is barely a breath between the end of the chorus and the start of the next verse and are almost identical to the ear. As they flow together so seamlessly that once again I imagine myself dancing around the Maypole. 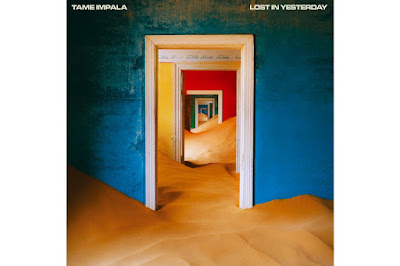 Lyrics to the bridge (below) are perhaps the hardest hitting, though with the jolly and constant melody I was left confused as to whether to feel empowered or redundant. If, speaking hypothetically of course, you are dating or in a relationship with someone whilst being in love with someone else, this song is full of pain. The throes and emotional turmoil of whether to confess your true feelings, weighing up the potential consequences of both action and inertia, only to force yourself to stop thinking about that person.

"It has to be lost in yesterday" is a recurring line in the song, and is, in this hypothetical situation I've posed, the moment that you come to terms with the past being a different universe to that which is currently existing, and should probably remain that way. "You've been digging it up like Groundhog Day" is the stark reminder that you can mull over a situation in your head every day for the rest of your life; without action it will be forever immaterialised as a mere thought. The music video itself is similarly hypnotic, set in various wedding parties, the first seemingly being from the 1970s, repeated again and again with each time edging closer to the present day. Scenes progressively become happier and more diverse, and it is lovely to see while the song is still lifting you up, before the director duo Terri Timely throw in a darkly bizarre and potentially violent twist at the end. The track reminds us of the circle of life, and how feelings are valid, but only when we are acting upon them and not leaving them stuck in our minds. This goes not only for love and romance but also ideas that could bring about great change. Upon the track ending, I was left feeling emotionally spent and rather confused, wondering whether my emotions have been validated or ridiculed by Parker. Given Tame Impala's large following, I imagine this is a similar conclusion felt by many of his listeners, and still it is truly novel to think about us as listeners respectively united by one song, while simultaneously being physically and emotionally distant.