Copperfield Gallery: (This) Precious Stone Set in the Silver Sea (until 6 March 2020)

As soon as you enter the beautifully clandestine space of Cøpperfield Gallery, the first thing you'll notice is the fairly minimal, or even sparse, layout of the space. Although this is a sight that wouldn't usually appeal to me, now that I have fully experienced the exhibition, I appreciate that a minimal design ensures that each piece is respectively studied carefully. The works that make up '(This) Precious Stone Set in the Silver Sea' are complex, with seemingly a lesser focus on aesthetics in favour of something more meaningful. I was truly inspired by the curation of the show, as the themes and messaging in each work are both singularly and collectively so exquisitely thought out, to the point where I became lost in the art and very quickly the minimal layout of the space became irrelevant. 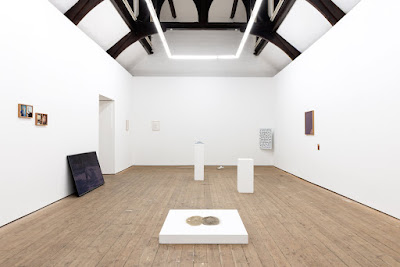 I visited the show the day after the UK officially left the European Union, and if I had known that the show would make me think about this, truthfully I probably would not have come on this particular day. However, the works are all about islands and the identities of inhabitants and landscapes in relation to neighbouring places, while also bearing in mind the maxim of "no man is an island" and the idea of islands being places of great isolation and solitude. The latter is arguably expressed nowhere better than Yorgos Petrou's 'Fractions of a Landscape' series, where digital prints showcase the corners of various islands. One in particular has seen the artist crop so much of the actual land that the composition of the piece is poignantly dominated by vast volumes of ocean water. The show's ability to make us think about both the UK's status following its departure from the European Union and climate catastrophe simultaneously is breathtaking. 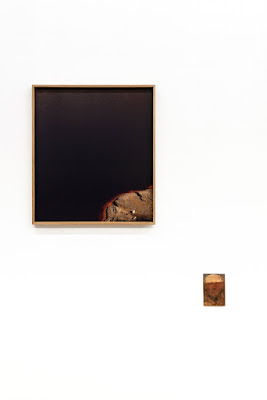 Sculptural elements are a major highlight of the show too. 'Theretofor' by Inés Camara Leret is backed onto a fridge door, placed at an angle that makes the layout of the room immediately more interesting, as well as breaking the viewer's habit of looking at works flat on the walls. The work is a collection of seawater from around the world, collated into souvenir-like magnets, making us think of fetishising geographies and natural resources. What gives us the right to take them from their native location? Why do we feel the need to do this? What do we really want from a souvenir? 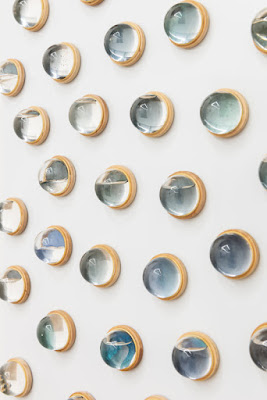 While the aesthetics of most works won't shock or excite some viewers, the meaning and justification for the pieces are, as aforementioned, so meaningful, especially as we start to come to terms with the reality of leaving the European Union. Not only are we not an island (at least not in the emotional sense), but as the curator says, the "fascination and fear" associated with islands is something that is entrenched in the depiction of islands in the arts, and indeed in the media. Many people on social media go on exotic holidays to islands, and already my use of the word 'exotic' is symptomatic of how we perceive them. We are led to believe that islands are almost these alien entities that live in entirely different spheres to densely populated nations, or to cities etc.

In the side office space, Irene de Andrés' 'Escull Vermell (Red reef)' is a display of a 35mm photographic slide of an idyllic beach scene on a lightbox, which for me is the perfect expression of how humanity has altered and defaced beautiful, entirely natural, landscapes for purely self-serving reasons. It may not be a work that screams of activism but it has started to change my thinking about how art can move you into action without being explicit. Curator Aina Pomar has done an incredible job of putting together works that aren't obviously matched, but once viewed together produce a stunning and emotive narrative where geographies and emotions coalesce in a place of both nostalgia and looking towards a highly uncertain future.
Labels: anxiety climate catastrophe concrete delicate emotion film global warming group show history landscape light mixed media print sculptural sculpture south london travel