Update: Chalton Gallery is now operating as UK Mexican Arts Society.
As you may have worked out by now, especially if you follow me on Instagram, I get through a fair amount of art exhibitions; it's like a bodily compulsion to go and explore, something that is so habitual that I sometimes need a show that is so powerful that it stops me in my tracks. Quality over quantity! The most memorable occasions of this are artworks which are immersive in one way or another; my all-time favourite piece is Robert Boyd's film 'Xanadu', but that's a different story for a different time. 'For/In Itself', as the title very much suggests, is an experience as well as an exhibition.


The show is a two-person exhibition of work by Matilda Moors, who graduated from the Royal Academy Schools last year, and Svetlana Ochkovskaya, who will be graduating from Goldsmiths MFA this summer. While the two artists aren't natural collaborators, curator Olga Tarasova has created a world that feels like the inside of a body and the inside of an alien world in tandem. Ochkovskaya’s work is, ironically, such an out-of-body experience that being paired with Moors’ sculptural work designed to make the viewer feel like they’ve just been swallowed is amusing and breathtaking in equal measure. Upon entering the gallery, which is named after the street on which it is located by London St Pancras, you encounter the first space to the left which is heavily adorned in pink, which is Matilda Moors’ mixed media piece ‘A Tasteless Offering’, resembling a large-scale tongue hanging from the ceiling. ‘Informational Hygiene’ then showcases large white teeth displayed along two facing walls, one of which has been erected especially for the show; this enforced division reinforces the notion of being able to create your own world and abandon reality. The bubblegum pink is at once both comforting and jarring; when it is not associated with old school gender conformity, it is often linked with ‘fleshy’ or bodily aesthetics. It is the latter that has been capitalised upon in ‘For/In Itself’. 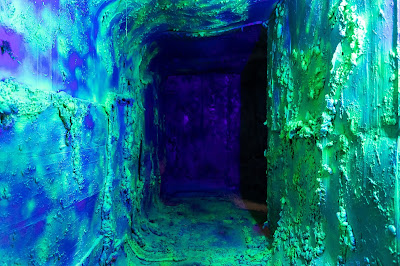 Having Moors’ work seep into Ochkovskaya’s installation is smart yet also slightly confusing for a two-person show, as it prevents a clearer dialogue between the two artists. Ochkovskaya's installation, ‘We Are Not Ourselves’, is highly stimulating, as rich blue and green hues are built into the space using expanding foam, bean bag filling and fleece among other materials. The artist has assembled what feels like a rave cave; a neon light solidifies this idea. As with many shows by emerging curators, ‘For/In Itself’ is highly Instagrammable, and that is not always a criticism; this exhibition is truly a joy to be immersed in. One human-sized sculpture in the second part of the installation is absolutely mesmerising, perhaps even moreso than the enclosed environments. Resembling a spiky, faceless yeti, this is an inhuman creature who apparently comes to life in the performance element of the show; I look forward to seeing what it gets up to.

The initial point of intersection between the two artists’ work is where Moors’ piece ‘Transmissible Encasement’, a pink sleeping bag huddled into the corner of the bright pink walls before they turn into a more meditative dark blue courtesy of the show’s second artist. Amongst all the vivid aesthetics and demanding environments, the work is a rare moment of humility, despite its palette. A sobering moment to reflect that Moors' work looks at that which unites us, which makes us human and reminder that one life is no more or less valuable than another. 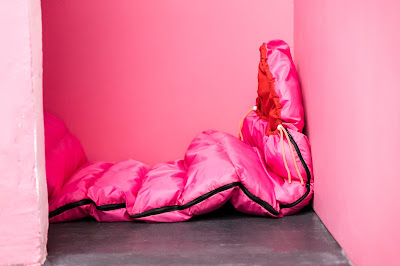 'For/In Itself' is the sort of show I'd like to recommend to art lovers as well as those with a more passive interest, given that the works curated together are a real spectacle. Its press release describes how the artists “imagine the gallery space as a creature, morphing it into a body”, and it seems like an experimental ground, where ideas of fantasy and the body come together. Such a bizarre fusion allows us to completely lose ourselves in the space, physically and mentally. Chalton Gallery’s exhibition is not a hidden gem, it’s a hidden microcosm. Every ounce of ego is stripped away, the sense of self is diminished as we journey into this fantasy zone; a performance evening will take place as part of a closing event on 28 February which I imagine will illuminate it all further. Details for that are here.