I have definitely walked into a gallery and been unpleasantly surprised before, but never quite so vividly transported to a comically tragic episode in my life. Almanac's new space in Brixton is hosting a solo show of Emily Jones' sculptural work, and the focal point is a gaggle of papier-maché geese. I was bitten by one as a child and Jones' geese are incredibly realistic, but the sculptures are so powerful that I soon thought less about that moment and more about Jones' message. The exhibition's press release introduces the artist's "ongoing enquiry into belief, the relation between human and nature, and the conditions of living in a shared world". At a time where people are more divided than we could ever have anticipated, and where we are finally beginning to comprehend climate catastrophe, the idea of living in a "shared world" is an increasingly salient one.

I visited Almanac prior to the General Election which has undoubtedly torn the country further asunder, let alone destroying the spirit of so many of us. When surreal, yet painfully anticipated global and political events like this happen, it makes me approach (or rethink) bizarre and uncanny art differently. Surrealism was born from the Dada movement during World War I, and although we're not quite there, the disarray that we are all in should surely be reflected in our art. Again the press release refers to "imagined orders that affect our agency and experiences", thinking about animal rights and the way that they take up space. Wildlife fighting back is a regularly occurring nightmare concept in film, but the premise that they inflict more violence towards humans than they endure is absurd. 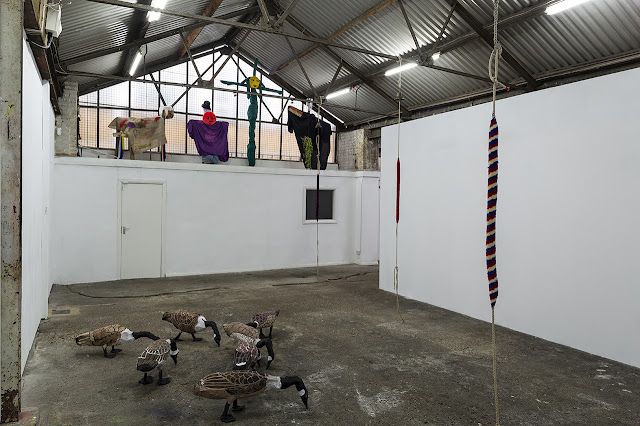 Overlooking the placid, harmless geese stand three scarecrow figures with, somehow more terrifyingly, the faces of emojis. Rather mismatched and disjointed, they are intimidating, as the artist uses the clearest method of conveying power: a physical dwarfing of the audience and its avian subjects. Jones created the scarecrows by reusing materials from their surroundings, however in being exhibited at Almanac, they have been stripped from these same surroundings, rendering them a comical thing of futility. An ironic and amusing part of the show's curation is the lack of impact they have on the geese; none so much as make eye contact in the direction of the scarecrows, yet to visitors of the space they are a bewildering presence.

Needless to say, the result of the UK's General Election has given me almost a different set of eyes from which to view contemporary art: how urgent is it? What exactly are its messages? For me, Jones' work here is pleasingly equal parts fun and thought-provoking. The press release informs us that "the installation enacts a call to salvation from our inability to live in a shared and finite world, where the only way to heal nature seems to [be to] remove ourselves from it". Yet as we observe the relationship and power dynamics between geese and makeshift scarecrows, the latter of which is a thinly-disguised depiction of our governing bodies, we are forced to enter the mindset of these birds and empathise, regardless of how bizarre and haphazard an action that might be. Tying the narrative together rather poignantly is the addition of three bells hanging from the roof beams, waiting to be pulled for a time of emergency and, as a result, unity. Reading closely into the work is highly rewarding for visitors of 'Snowshoe Hare and Allies', and rather aptly leaves us wondering where we stand in these hierarchies, and how we can truly come together and act collectively and tenderly. 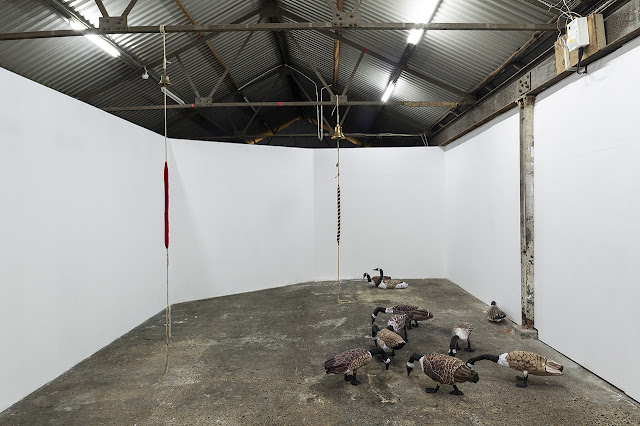