Carl Kostyál has two spaces, one in London's Mayfair and another in Stockholm. I visited the latter a few years ago and it was one of the most fascinating art experiences I've ever had on holiday; the gallery is located down an eerily quiet street in an unassuming part of the city, in what seems to be a former office building. It's a thrill to find art in different places, but as always it's tricky to attract general audiences when they are, essentially, incognito. Back to London and it's a completely different ballgame in Mayfair, and artist Oli Epp has curated a lighthearted show of new and recent works by three international artists: New York-based painter Sarah Slappey, Budapest-based sculptor Zsófia Keresztes and London-based Robin Mason. 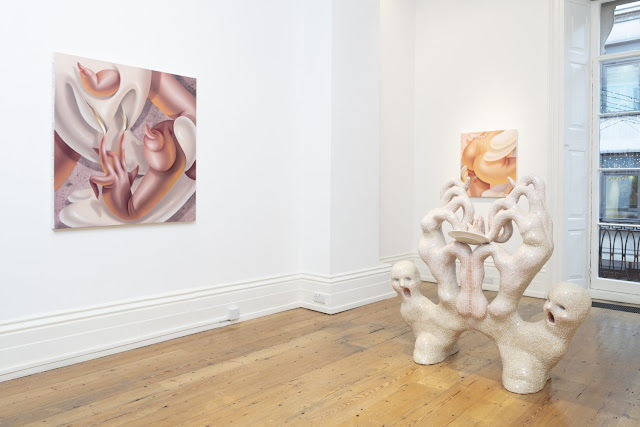 
The space is incredibly elegant, overlooking Savile Row, making the fun dynamics of the three artists shine. 'Fingertips'' press release name-checks Freud instantly, and it certainly makes sense; there are psychoanalytical undertones and sexual motifs throughout the show which provide the serious grounding to suit the environment. Sarah Slappey's work is described as "painterly perversions" but while the content is cheeky and plays with bodily abstractions, the soft palettes and rounded shapes make them incredibly enticing for the eye. Epp and fellow curator Aindrea Emelife have written in the release that the pinks in the work are "derived surely from Rubenesque cherubs" but for me they are more reminiscent of the 'millennial pink' hue that has been made popular recently. Fleshy nipples and body parts depicted in this particular colour brings a fresh perspective to the oft-illustrated subject matter.

Slappey's work is well paired with that of Zsófia Keresztes, whose sculpture bears a fascinating and intrusive shape, with curvy lines and bulbous parts yet with sharp ends that feel quite perilous. The three works in the show are comprised of mosaic, which is itself steeped in a rich international history. While they are all perplexing in their messages, 'Smallest in Common', which is ironically the largest of Keresztes' three, appears to be naked headless forms taking the shape of a tree. The piece is surreal yet not quite Surrealist; copper pipes take the role of rope and the power of touch and its ability to bond us together is alluded to. 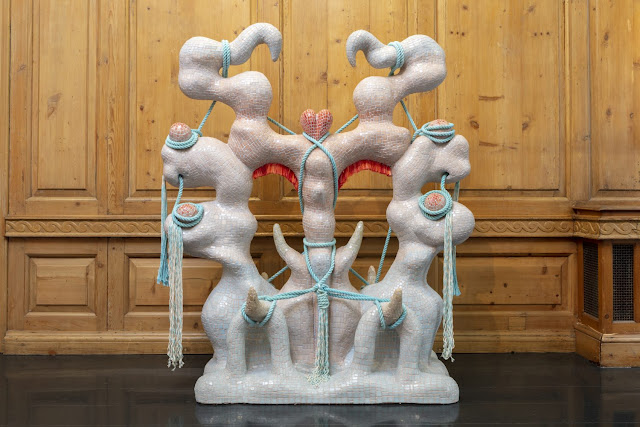 Robin Mason's paintings are truly thought-provoking in that they are reminiscent of many elements of visual culture, both contemporary and historical. Again referring to the press release, the curator says that "nostalgia comes to play and ties a knot between all the artists featured", and if you take one look at the film, television and fashion industries, it is easy to observe how nostalgia is becoming a product in and of itself, constantly being resold to the consumer to distract us from the misery and deception of our time. Mason's work is complex yet inviting; pinks, textured paint and hard lines resembling illustration come together to form these microcosms, where religious and personal symbols fly at the viewer but are largely stripped of context. This keeps us coming back for more, although the wood panelling of the gallery is somewhat sobering when we're trying to enter Mason's world, grounding us back into the reality of the here and now. Fighting back against this, details jostle for our attention, a particular textual highlight from the piece 'The Funfair and the Altarpiece' being: "The warmth of your flesh is near me as you stand so close and read this text". 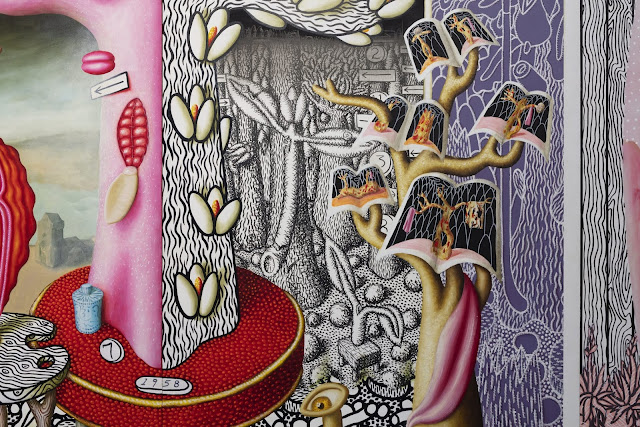 While the themes and stylistic features between the artists aren't necessarily an immediately natural combination, the titular idea unleashes a new layer of understanding and thinking around the works. It sits most comfortably with Slappey's paintings, with their delicious textures and not-so-discreet allusions to sexuality. The means of painting is also shared in part by Mason, who creates worlds that you want to touch before diving in. Keresztes' wonderful sculptures, meanwhile, look fresh from any art fair or biennale you could care to mention, with rope detailing inspired by Shibari, Japanese bondage providing a darker edge. It seems ironic, or obvious, but the exhibition could have only really been improved by incorporating an element of touch, perhaps through an immersive or installation-based work. Thinking of a less literal idea of touch brings a new dimension to the sense, its capabilities and its potential to excite and titillate, something unlocked similarly by all three artists. 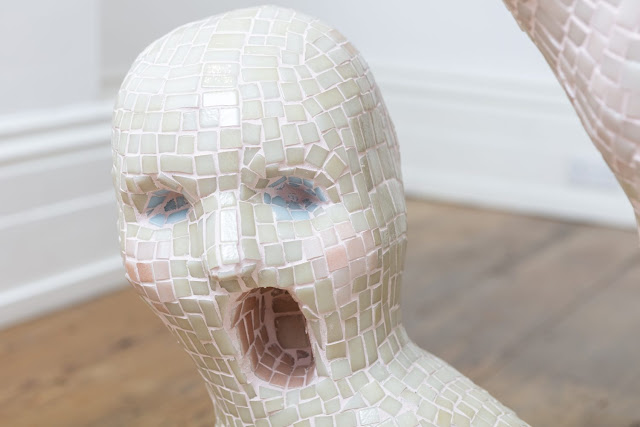