Seager Gallery is a relatively new space in Deptford, south London, which for various reasons is enjoying a thriving art scene at the moment. Seager has already hosted a series of impressive shows and I'm always eager to see galleries located within residential areas. For this exhibition, the gallery has collaborated with curator duo Martin Mayorga and Vanessa Murrell from DATEAGLE ART, who I first encountered earlier this year when I visited their exhibition 'Darlings of the Underground', a show bursting with life focused on the urban landscape with well-researched, stimulating curatorial ideas.

Having graduated from the Slade School last year, Gray Wielebinski's work has been popping up across London's art scene, including alongside Nan Goldin at the Gazelli Art House group show 'It's Not Me, It's You'. I knew Wielebinski's work has a recurring focal point of gender and sexuality, so I was interested to assess the artist-curator dialogue on the subject.

Upon encountering the piece, I was instantly reminded of Laura Ford's sculpture 'A King's Appetite', which I had the pleasure of viewing as part of the Turner Contemporary's exhibition 'Animals and Us' last summer. As mentioned, I was looking out for the gender and sexuality evocations in Wielebinski's work, yet the crestfallen, somehow non-descript being lying on the gallery floor came as a surprise. Much as the show's title might suggest, there is a darkness to the work that resembles Frankenstein's monster; however the creature's lack of concrete identity and lack of prescription to classification actually presents itself as a liberating way of thinking about contemporary art. 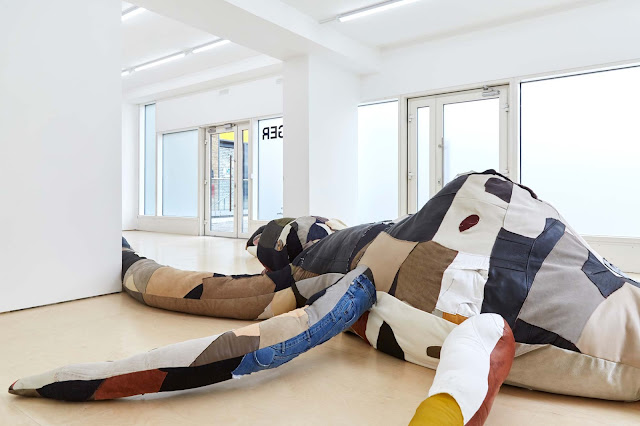 The creature has qualities of various animals, and this is mirrored with different material composites. Its 'beached' appearance is a stark reminder of climate catastrophe and extinction, and the mixed repurposed materials are further symbolism of recycling. These ideas aside, the large scale of the installation, which is surely the correct terminology, is so physically intrusive that a critical mind must consider what the artist is vocalising here. Exploring closer, the work specifically merges the sphinx and the scorpion, with Wielebinski bringing the traditional symbolism of both creatures into the contemporary arena. In mythology, the sphinx is the icon of man's domination over nature, whereas the scorpion was considered both sacred and highly dangerous in ancient cultures.

This paradox of characteristics and perceptions could be viewed as a commentary on binaries in social identities such as, of course, gender. Being stitched together from a variety of sources, both material, historical and social, is indeed how our characters and lives are composed, regardless of how we self-identify. The work's pendulum swing between the contextual histories of the scorpion and the sphinx and its soft materiality which could resemble a child's toy is bizarrely comforting and transports you far away from Deptford into a mythical land, or perhaps even Wielebinski's mental space. 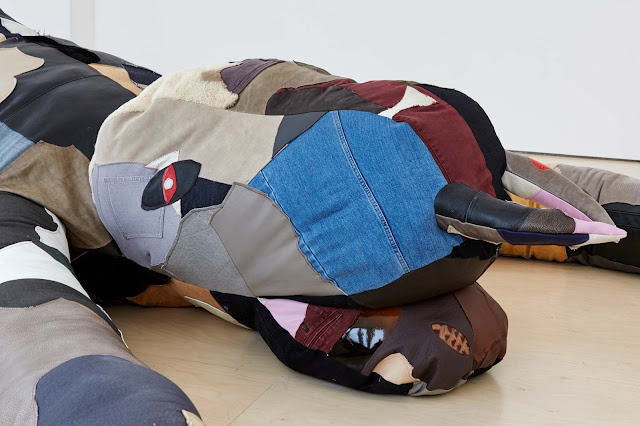 From what I've observed from their social media activity and real-life programme, DATEAGLE ART seem to build strong relationships with the artists they exhibit, developing a real understanding of them and how they want to move their practice forward. 'Dark Air' is a great example of this, with a thoroughly detailed press release which almost reads like a fantasy novel. It explains that, "rather than display a body of work, this show foregrounds a body of work and as a constantly reimagined patchwork", which feels like a cliffhanger, ensuring that our appetites have been whetted as we await to see how this "patchwork" expands.
Labels: animal climate catastrophe dateagle deptford gallery gender gray wielebinski sculptural sculpture south london textiles