I don’t know what it is about the annual onslaught (interesting choice of word…) of degree shows that keeps me coming back, not only every year but packing a great deal of them into a short space of time. It’s coming up to the end of June and so far I’ve managed to get to undergraduate shows at Goldsmiths, Nottingham Trent and Camberwell College of Arts and postgraduate exhibitions at the Slade School and Royal Academy Schools. Overall, and this really is summarising, I found them all quite disappointing except the latter; I think this is largely down to the work not being as in touch with the world that we’re living in as I would like. Having said that, of course we all need some escapism, but truly, if I see another realism work painted in pink for no apparent reason I’m going to scream.

I was at Nottingham Trent for a different reason so my visit to the Fine Art degree show was coincidental, but I’m not going to spend much time discussing it as it was fairly shocking as a whole. Work was derivative to the point that I was reminded of transcription studies when I was doing GCSE Art. There was also an accompanying booklet, which was incredibly thick and charged at £1; I willingly bought it to try and understand the artists’ thinking. Instead, images of each student’s work were followed by what I can only describe as total nonsense; the cohort were clearly instructed to provide an abstract version of the traditional artist statement, with the intention of it seeming edgy, but it was truly infuriating to read, and almost an insult to the audience’s intelligence.

Camberwell College was a nightmare to navigate, across four blocks and five floors a piece, with a hell of a lot of students to get through. The real highlights came from the parts I wasn’t expecting to like, namely the Photography and Illustration courses. In fact, once I got round to the shared Illustration and 3D Design exhibition space, I found it very calming; a nice allocation of space was given to each artist and it was a pleasing antidote to the sheer volume of students exhibiting. Imo Aigbirhio’s (@imoaigbirhiodesign) ‘The Furry Box’ was a great respite to not only a packed degree show but the world as a whole; photographs of the project, which is very much as the title suggests, in situ across south London for passers-by to “hug” is a charming idea. Charlotte Pluck’s (@charlottepluck) piece ‘Present Yet Absent’ is very promising, doctoring archival photography with painting to create a new aesthetic of the archive. Further along was Photography, hidden around a corner I approached tentatively as it was poorly signed and dimly lit, but there I found Claudia Aitken (@meirossi.phtgy) and Hatty Hambridge, who were clearly inspired by gallery curation and installation, as their respective setups were crisp and professional; it is easy to see how their work would translate into an external exhibition.

Full disclosure: I was in a terrible mood when I went around Goldsmiths. As my alma mater (sorry), it will always have a very fond place in my heart. This is why I’m assuming my mood significantly affected my visit, however there are two particular points that were consistent, such as the new(ish) former public baths, Laurie Grove, being filled with video works. Goldsmiths have done this for the past couple of years and given that attention spans are at an all-time low, curating film pieces one after another is baffling to me. Secondly, the joint honours course of Fine Art and History of Art was of an incredibly higher standard, and was at large of an entirely different production value. The scale and thought behind the works were beautiful and at times moving, and I found moments of total stillness in the exhibition that is an absolute godsend. Some paintings by Lucinda Purkis (@kingkingstringball442) stood out, with large sketchy faces crying cartoonish tears which transcend the canvas onto the walls; I resonated with them that day. Taina Griscom’s (@tainagriscom_art) large-scale installation on waste is simple in its premise and also somehow simple to look at, but its encroaching size and pressing references to landfill makes it worth everyone’s attention. A special mention from the Fine Art programme must go to Tobias Bradford (@tobias_bradford), whose kinetic sculptures of hyperreal body parts and domestic objects moving, oozing and spasm-ing were troubling and sinister but immaculately put together. 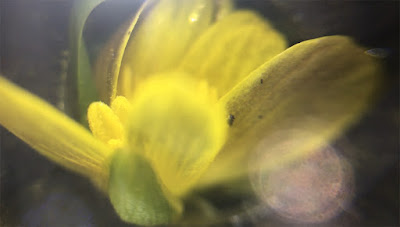 Film still: Rhona Eve Clews, If I eat you, will we both still be OK? (Plant), from the series Odes, (part of a larger quest), 2019. Text, performance and installation, 7.5 minutes, dimensions variable.

Now onto the postgraduate shows, which undoubtedly have more at stake: I found the Slade quite underwhelming this year. It generally felt like there was too much stuff, although it does seem like video is going out of fashion, which can be a relief as it’s not always done well (to put it mildly). I think I’ve been looking to be entertained this year, as my favourite works were from Nancy Krakur (@anniebarnacle), who produced a stunning kinetic installation full of sound and colour which resembles a film set, and Rhona Eve Clews (@rhonaeve), whose room included screens with mismatched montages of tranquil nature scenes. I also purchased the latter’s book of poems which are a joy and have inspired me to take more notice of poetry and dabble in it myself (watch this space…or don’t). I also loved Johnny Izatt-Lowry’s (@johnnyizattlowry) paintings of different styles of faces; I imagine he will be snapped up by one of the London galleries if he hasn’t already. 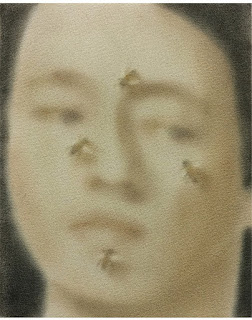 Lastly is Royal Academy Schools, which, to me, was brilliantly sophisticated for some totally shallow reasons. There are only seventeen spots on the exclusive three-year programme, which has no tuition fees, so for the degree show each artist has a generous amount of space for their work as well as three years to work through their development. Two artists in particular had me wriggling with joy: Eva Gold (@evagold.jpg) and Richard Lockett (@schooldinners_) had the kind of work that is beautiful, minimal and clean. It’s also the sort of thing that goes against my yearning for distinctly political art, but maybe I’m being converted. Gold’s installation was centred by ‘Lazy boy (The Perv)’, a re-purposed La-Z Boy chair with rubber, gaffer tape, silicone, latex, automotive grease and Vaseline, facing ‘Backdrop for a porn channel’, a large expanse of wet clay with an array of marks made by the body. With the chair facing the piece, and given its title, there is a stifling feeling that the artist is referencing our changing addictions and vices, from TV to porn to general sloth. Lockett’s 3D prints of pepper grinders gave a lovely minimalist domestic interior edge as a foreground to his oil paintings, which really must be seen in person. They are also minimal, resembling a galaxy with small bursts of vibrant tones. Perhaps this is the future of minimalism, with a focus on the interiors of our spaces, whether this is the gallery, art school or home. 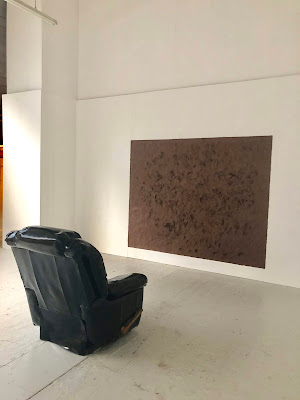