For this alarmingly bright exhibition at Campoli Presti, the viewer's eyes must settle to the 'high-viz yellow' abstract paintings before the work can be unpacked to reveal an assessment of the contemporary moment. As shocking as the palette is, we are reminded of old school art history lessons on colour theory with a large dose of colour synaesthesia, and brought back from the dreamland of the art world to where we stand in this tumultuous time in history. 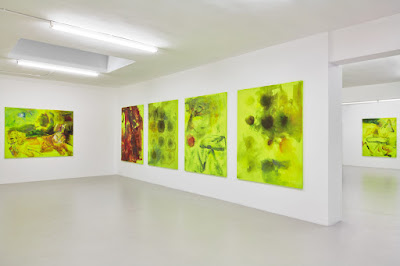 The press release accompanying 'Lion Hunt' speaks of the artist's point of departure with this body of work, Delacroix's 1854 painting 'The Lion Hunt (Fragment)', and immediately the viewer notices the different parts of the series form a dialogue together; a fragmented whole. This is an incredibly well considered aspect of the show, especially as Campoli Presti has spaces in both London and Paris, two cities facing a stream of public unrest; the French 'Gilets Jaunes' are directly referenced, and once again we are humbled by art's capacity to mirror life in new ways. 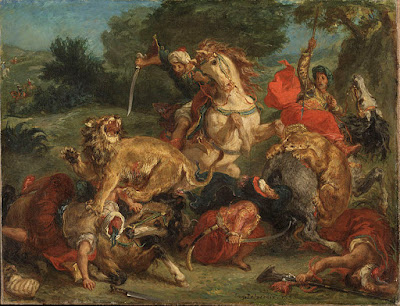 The nineteenth century original painting by Delacroix shows the raw violence of a 'man versus beast' attack; in a battle of survival, a contemporary gaze surely has a fresh stance on the action in the piece, observing the scene from the stance of both lion and human. This is an intriguing parallel to the Gilet Jaunes movement, an unavoidable part of the exhibition due to the emergence of neon yellow. The relationship between Spaulings' work, the Delacroix painting and current political upheaval in cities such as Paris is fascinating and something I truly was not expecting to gain from the show. 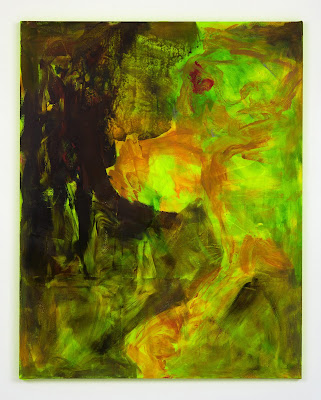 While at first truly blinding, the constant use of high visibility yellow fabric which comprises the canvas of Spaulings' paintings is set up perfectly by Campoli Presti's flawless white backdrop. Complementing the 'Lion Hunt' series of paintings are five sculptural works, marble pieces displayed sporadically around the space, between paintings or under window sills looking out onto the busy streets of Bethnal Green. Their forms are beautiful and created with an excellent precision, and it is their shape which piques the interest above all else; their resemblance to gravestones make them a solemn respite from the vibrancy and seemingly fast pace of the rest of the exhibition. For this show, abstraction, fragmentation and symbolism truly fuse together effectively. Solid sculptural pieces in such a busy environment allow time to pause, which is not only a fantastic means of staging an exhibition but also allows time to reflect on the press release description of the effects of the Gilets Jaunes; the "end of politics, end of civil society, failure of the neoliberal project, human emergency". 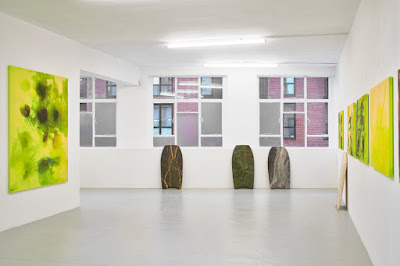