Going to see an exhibition knowing that you're mostly in for video work can put me in an interesting mindset; other than the obvious content of the work, I start to think about how the gallery will curate the space. Naturally, the gallery has no obligation to transform the space in the style of an "immersive experience" or installation art, however when the ambience and interior of a gallery suits the film work so brilliantly, the viewing becomes an extraordinary experience.

The last show I saw at the fabulous Carlos/Ishikawa was Stuart Middleton's solo show, where dazzlingly crisp white walls were the backdrop to several 'social realist'-style paintings; in contrast, New York and Bangkok-based Korakrit Arunanondchai dominates the space with films in pitch darkness. Large beanbags on the floor for seating (always a welcome addition) leave viewers arrested between the three screens of the installation, 'No history in a room filled with people with funny names 5'. Previous editions of the series have been screened around the world, including the Kiasma Museum of Contemporary Art in Helsinki and the Bill Brady Gallery in Kansas City, Missouri.

While the beanbags face the screens, you can't help but notice an elaborate light installation lighting the film from behind. This element is not fully cited in the list of works, implying that it is an integral part of the installation. A model of the performance artist boychild's face lies in the centre of the light work; it is unmistakably hers and resonates with the third screen, whereby boychild's hypnotic movements play out. In the press release, Arunanondchai discusses the importance of touch in his work, and this can be seen in boychild's interaction with her own body, as well as an idea that 'touch' does not need to be physical; whether this is the unconditional devotion between the artist's grandparents in the segment 'The current state of my grandparents', Arunanonchai's relationship with boychild or the way in which the world was emotionally touched by the recent entrapment of schoolchildren in a Thai cave, which is documented in the film. 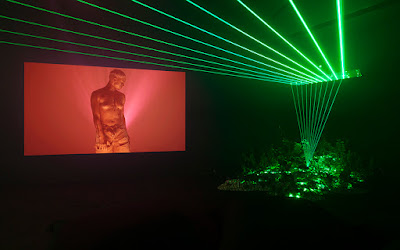 As an introduction to the show, the press release states that "No History refers to the human history that is recorded through verbal storytelling and other forms of myth-making that mutate over time". A form of legitimising non-standard dialogues or histories within the contemporary moment and recent history is poignant, and Carlos/Ishikawa have delivered Arunanondchai's latest installment perfectly. It is captivating and artistically intelligent without being intimidating; the clarity of the narrative is highly appreciated. Supported by an impressive light installation and accompanying publication, we are treated to an exhibition filled with intimacy as well as mass-produced media imagery; cuddly toys and bright streaming lights contrast each other to allow our attention to be split between the various aesthetics and stories, viewing the installation as a whole. It's unnerving, it's comprehensive, it's fantastic. 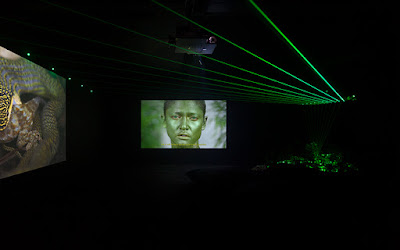