As the year rolled into August, a real drought in the art world calendar, I made a half-baked vow to take some time out of visiting exhibitions and pursue other things. I soon got very restless and ended up venturing further afield into Woolwich to visit the group show 'Fatal Attraction' at Thames-Side Studios Gallery. A cinematic title goes a long way, and will surely draw visitors in to what is a well thought out, captivating and stimulating exhibition of emerging and mid-career artists whose names are fairly well known in London's art scene.

'Fatal Attraction' certainly has an interesting concept, and although there has been talk from some art critics about having no interest in an exhibition's press release, the text for this show is worthwhile and interesting in its own right. Via curator Chris Thompson, our obsession with over-consumption is addressed critically, alongside ways in which identities and legacies are shaped by an internet presence which is intangible and often hideously disproportionate. Although the release states that "the show is interested in the moment where culture becomes aware of its own autonomous mechanisms", I found the result to be quite the opposite; London-based artist Doireann Ni Ghrioghair presents two sculptural works, curated beautifully far away from each other, of bent, white crooked pillars, evoking economic and, indeed, architectural collapse. There are so many examples of architectural ruins we can think of, both historically and recently, that are connected to various social issues; physical developments surely reflect their political and environmental counterparts. 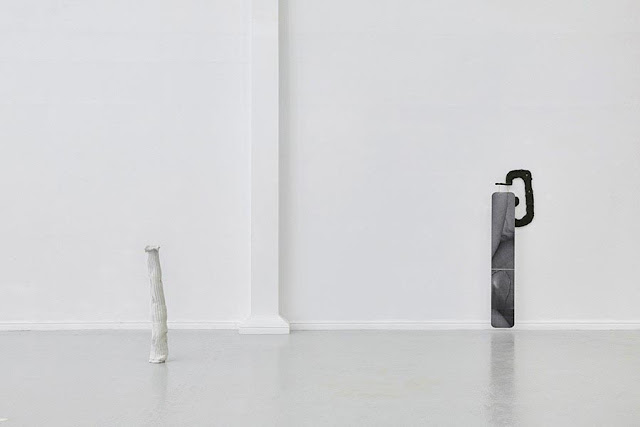 Appropriation branches off from this, which also extends to the site specific. How Chris Thompson's discreet yet charming installation 'Untitled (Doggos)' would look out of context, much like Billy Crosby's highly functional self-explanatory 'Signage', is an interesting question. Beth Collar's contribution to the show are small-scale sculptures which I've seen before in a much smaller, more concentrated space; I wasn't a huge fan when I saw them the first time but they have somehow gained a new lease of life at Thames-Side Studios. Taking the form of a head sliced in half, the middle-aged male brain with a receding hairline can easily be viewed as a satire of the privileges afforded to this demographic. The concept of them sinking into the ground, losing all senses, exemplifies the overarching themes of bureaucracy and power relations shaping our behaviours. 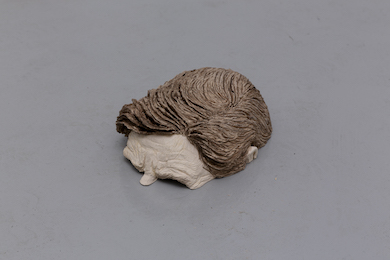 'Fatal Attraction' is a collection of seriously high-quality artists; I would like to have (or offer!) some insight into the inclusion of Michael Pybus' 'Spill' print, positioned far above eye level. Although showcasing the impressive capacity of the space, its garish poster-paint colour schemes with Pokemon and Digimon characters make the piece unnecessarily kitsch. However the idea of recurring characters and palettes to entice young people and children does allude to bringing capitalism and consumption to the masses. It is perhaps ironic for fine art, especially in a commercial setting, to be setting this agenda of highlighting excessive consumption, but the craftsmanship that has gone into both the work and the curation is highly impressive, far exceeding what you might expect from a small gallery space attached to outer-city studios.
Labels: art art gallery art studios installation mixed media painting print sculpture south london