Enclave Lab is a tiny space in Deptford, an area that has seen some serious change in recent years. Supported by Goldsmiths University, this exhibition is the second instalment of the 'Mission to Touch the Sun' series and is seriously good. The theme that unites the work together is not tenuous or overdone, and is in fact apt to the summer season. Works look at the human cost of tourism and subsequent exoticism in a way that is critical but also accessible, in that it gets to the point with moments of being appropriately flippant and amusing.

Lydia Blakeley's work gained some attention recently after her depictions of the Kardashians' homes went viral and got the favour of online art critics. Their simplicity and unashamed merging of fine art high culture with tabloid pop culture surely introduces contemporary art to a new audience; she is still halfway through her masters at Goldsmiths, so it will be exciting to see which direction her work takes next. Ultimately, Blakeley is a talented painter and can adapt these skills for any purpose; her sculptural work at Enclave Lab is an oil painting in three parts on a canvas molded to a deckchair frame. Using the most mundane imagery from the worlds of leisure and tourism, including flumes and an ice box, the comforting palette of "Millennial Pink" and powder blue are pleasing so as to trick us into the flavours of consumerism in a concise and attractive manner. There is also something to be said for the base idea of a chair as a functional object; while I wouldn't recommend sitting on Blakeley's sculpture, this parallel between mundane functionality and an object of beauty is the bottom line of the show, where tourism is both entirely necessary yet often detrimental for a society. 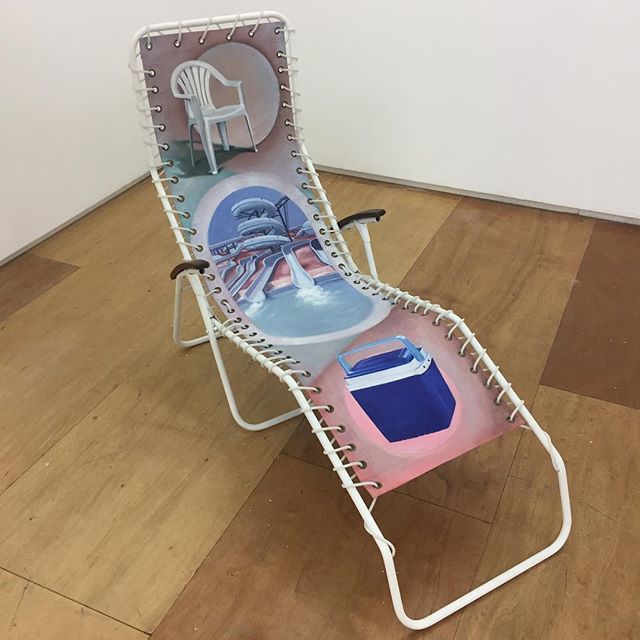 
Every artist's work in the show captures the eye and the imagination in their own ways; Oliver Durcan's small-scale series 'Exit Entry' sees the artist reinventing rather cliche photographs taken by holidaymakers out of plane windows before transcribing them into delicate, beautiful paintings. When we take these photographs as we fly over beautiful planes and landscapes, we feel as if they capture the moment of excitement perfectly with a hint of the sublime; however once they're posted to Instagram, they have lost their original meaning, that seemingly unique sentiment. Durcan's paintings, on the other hand, seem to somehow flip this idea on its head: context and original source imagery aside, they are simply beautiful to look at. The gallery's press release states how "tourism is...led by our desire to discover dream destinations and experience the authentic" and Durcan's paintings present this non-place that is potentially the closest we get to the dream we are sold in tourist packages. Open, uninhabited spaces far above civilisation and laws, where all there is to observe are the cyclical movements of nature. 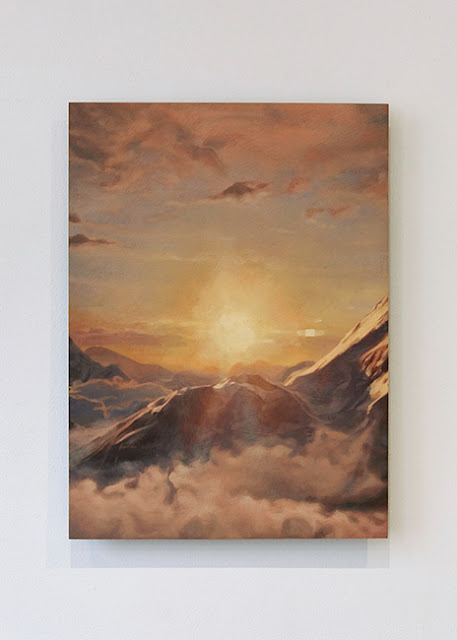 
As mentioned, the Enclave Lab space is rather small, but this is so rarely an issue for curators with a clear vision and strong artist contacts to make their ideas come to life. It is with this in mind that I have to say that the framing for Paula Pinho Martins Nacif's three-channel video installation 'Fantasy at the Beach' is set up perfectly and once again it does not take any complex, elitist analysis to understand how the piece contributes to the theme of the exhibition. 'Fantasy at the Beach' is an examination of exoticism in the tourism industry, marked with a black woman dancing on a pole on the middle, always maintaining eye contact with the viewer and regularly smiling as perhaps the ultimate example of an Othering gaze. 'Look-but-don't-touch' is certainly an element of tourism, whereby no one truly gets authentic perspective on their surroundings, or indeed the communities; encounter new lands at face value, then go home. Symbolism is strong in this work, as is its aesthetic of early-2000s websites and early social media (the now-defunct Piczo springs to mind). Images on all three screens are constantly moving, whether sparkly palm trees or GIFs of falling dollar bills; the movements are so repetitive that they become dull, yet the viewer remains transfixed.

Over the summer period, galleries are known to either close or throw together gallery artists under tenuous themes, so it is refreshing and inspiring to see small independent spaces enlisting strong curators and artists to present out of the ordinary themes. Lydia Blakeley's work is versatile yet precise and aesthetically pleasing in its delivery, with Oliver Durcan's paintings offering a light, delicate insight into the tourist mind and Paula Pinho Martins Nacif highlighting the exoticisation, and in some cases Orientalisation, of the tourist gaze in foreign lands, whether this is fetishising cultures, peoples, languages or symbols.
Labels: consumerism fetish group show installation internet landscape painting realism sculptural south london tourism video