There are a few elements of Joey Holder's solo show at Matt's Gallery's latest iteration in Bermondsey that fit together so well and support the artist's ideas to perfection. One is its ten-day run; as part of the gallery's programme of ten-day, quick-turnover exhibitions, the content of 'Adcredo' is so intense, overwhelming and at times sinister, that a short and impactful stint at Matt's Gallery works well. Within the gallery, a matte black enclosed space bears symbolisms of shapes and key words associated with various cults, internet phenomena and the like, as the perfect backdrop to the two-channel video installation which is the core of the show. 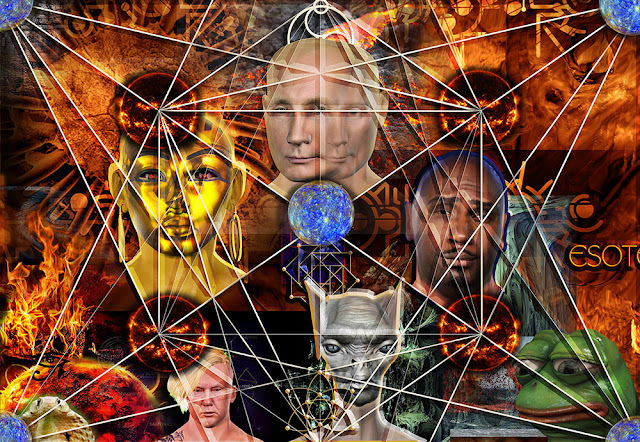 Using CGIs of recognisable contentious figures in contemporary culture as vehicles for communicating the complex ideas present is effective and apt, especially in the cases such as Donald Trump and Kanye West where public speeches or interviews are directly quoted. West's are particularly interesting, mostly due to the fact that his recent Trump-supporting outbursts were so supposedly uncharacteristic; "I want to make America great in my own way" is dangerous in its appropriation of 'alt-right' language, even moreso given his international popularity. Holder also employs fictional animated characters found from her research on online conspiracy theories and ominously anonymous quotes about society blur the distinctions between reality and fiction.

To add to the claustrophobic nature of the space, the installation's soundtrack jolts between frantic, filmic and completely overwhelming. Its complex, saga-like form is used as a sensory backdrop to the video installation; its various parts, from talking CGIs to footage of lava, lightning and anonymous quotes, are looped randomly, which means although the running time is 15 minutes, it is likely to be longer before the viewer has seen each chapter. During my visit I saw Trump's CGI twice but as I referred to the large scale print on the wall placed between the two screens, I persevered until I saw Pepe the Frog's confessional, which is a definite highlight as the cartoon frog laments his descent from post-college-boy meme symbol to a "puppet for the alt-right" alongside a clip of a frog dissection.

The work as an installation is a truly full experience; at times it is so immersive that it feels like the opening to a dystopian Thorpe Park ride. Key words printed across the space envelop the viewer in Holder's world and that of the internet subcultures. Phrases such as 'cybersectarianism' (the recruitment of followers to a religion or belief system via disseminating ideas and texts online) and 'collective affirmation of identity' make short, sharp references to the attitudes and mechanisms of indoctrination. Through the use of CGI and familiar imagery, Holder shows us how simple ideas and popular figures we know and "trust" under pop culture and capitalism (see: Peter Thiel) have a devastatingly short-sighted influence on us, the visual, social and financial consumers.
Labels: AI art Bermondsey contemporary art installation internet london meme pop culture sound art south london technology video