Yamamoto Keiko Rochaix: Byzantia Harlow 'From the same source I have not taken' (until 24th May 2018)

Seeing the delicate lilac walls and sharp forms of London-based artist Byzantia Harlow's sculptural work from the streets of Aldgate was such a surprise that I had to explore the space at Yamamoto Keiko Rochaix, E1, further. Individual artworks are not named as such, (but are after further research) instead the whole body of work is treated as an entity, titled 'From the same source I have not taken'. Incorporating performance, installation, sculpture and video, entering the gallery sees the viewer engaging with a space that has been thoroughly, and effectively, taken over by the artist. This is particularly important and relevant given the focus on rituals and spirituality, which would perhaps be less suited to a traditional white cube space without the personal perspective that YKR boasts.

Before I begin trying to unpack the ideas behind Harlow's work, it must be acknowledged that the work is exceptionally beautiful. Crystal forms are replicated through jesmonite, resin and dried moss; the recurring purple hues not only evoke a sense of calm and spirituality, but as a colour that does not often occur in the natural world we are reminded of the disparities between the natural environment and our daily lives and behaviours. The first piece by the entrance is particularly mesmerising in this sense, as its deep blues and purples resemble manmade materials such as marble with their integral patterns, yet the protruding bronze additions showcase a stifled life source (pictured below). 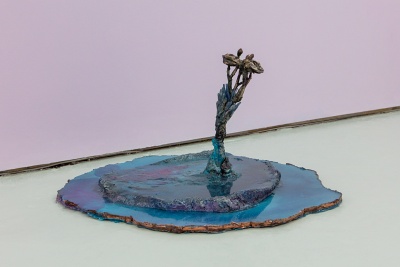 Byzantia Harlow, Those Who Drew Once from the Spring Do Not Seek to Keep it in Their Jugs and Drink from it Alone (4), 2018. Jesmonite, resin and bronze, dimensions variable. Yamamoto Keiko Rochaix, London. Image credit: Alexander Christie.

Alongside the exhibition is an essay on Harlow's work by art historian Meg Boulton which reads like an extended press release, a pleasing addition as the themes of ritual are already fairly complex and often subjective and personal. Natural forms are prevalent in ritual imagery and in the show, especially in the ground floor of the space. A stalactite-styled sculpture is affixed to the ceiling and we are once again reminded that Harlow's work is not just arbitrary sculptures around a theme, but that the artist wishes to draw us into an environment which expertly merges nature and synthetic production. 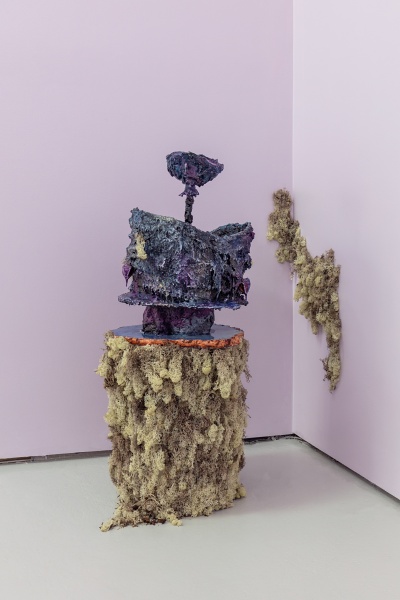 Byzantia Harlow, Those Who Drew Once from the Spring Do Not Seek to Keep it in Their Jugs and Drink from it Alone (3), 2018. Jesmonite, resin, bronze, dried moss; dimensions variable. Yamamoto Keiko Rochaix, London. Image credit: Alexander Christie.

Harlow's choice of materials add another layer of intrigue, whether this is the healing mushrooms included in the accompanying performance, or resin. In the sculptural works where the viewer can peer inside, there is something of a double illusion as the external parts bear the appearance of ceramics while their insides look filled with liquid, which is in fact resin. In several other pieces, the use of dried moss cements this potential of natural and personal lives being closely aligned.

Downstairs we are treated to a totally unexpected surprise; I couldn't help but say 'wow' when I encountered, firstly, the small installation space at the back of the floor, identified from halfway down the stairs by a pink neon strip light. The way in which this fluorescent hue taints the secluded space is in itself magical, never moreso with the crystal-shaped jesmonite piece in the centre. Whether the individual viewer believes in the healing powers of crystals or not is fairly irrelevant; the sculptural feature is a replica and holds its own power and significance through Harlow's artistic vision. The crystal's recurring motif takes the viewer out of daily banality and into a sphere of the unknown which reminds us of the inextricable importance of nature, space, personal and collective rituals and, most unexpectedly, the power of colour. Whether it is the darkness of the video screening space allowing an emphasis on the film's content and sharp circular screen, the discoloured dried moss or the lilac walls, the space belongs to Harlow and entices us to explore both our physical world and a parallel aesthetic one. 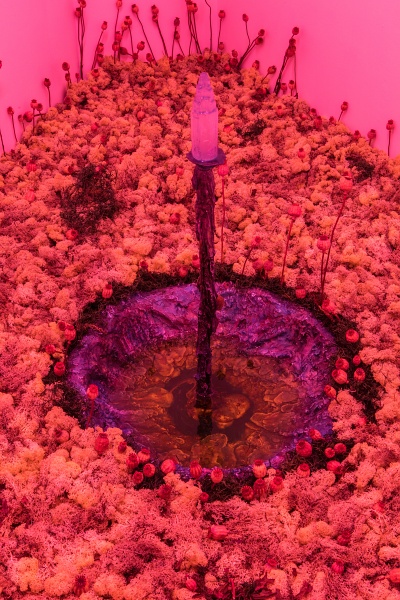