Rodeo Gallery: Apostolos Georgiou 'From My Heart' (until 16th June 2018)

For this quiet show in one of the loudest pockets of London, Greek artist Apostolos Georgiou has produced paintings that could be mistaken as fresh from a degree show, but in fact the artist is in his sixties. The paradox of the quiet space in the bustling area of the city is further amplified by the bizarre curation of the show, as although the paintings are large, some are hidden round corners and out of immediate sight. Figures are sometimes without full faces and never have mouths; the viewer is very much invited to create their own narratives and bring the works to life. 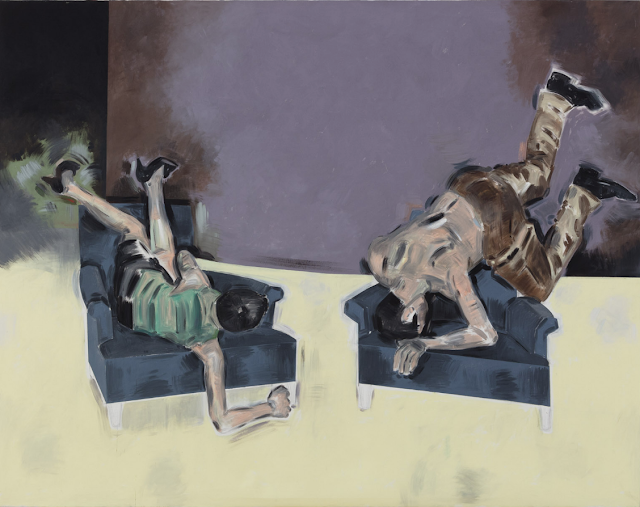 To add further mystery and intrigue, none of the paintings are titled, and it is this that really creates an isolation between viewer and image. What I mean by this is that we are not offered anything as context or to fill in the gaps: even the press release is just objective conjecture descriptions of the different paintings, which feels like a satire of the gallery's role in aiding our understanding of the work. Despite the age we're living in where we are all supposed to be proud of who we are, Georgiou's work reminds us that in the real world, shame and uncertainty is still rife. On the gallery's first floor, we encounter a man covering his face while showing us a letter with a black heart in the middle; the humiliation of potentially unveiling our true emotions is too much to bear.

In the same space, we find what is a true highlight of the exhibition, a woman sat in a dark blue room on a bed of a lighter hue, in total isolation other than a long rifle placed beside her. The fact that the weapon is depicted in a space as sacred and intimate as a bedroom makes the image even more eerie, alongside the visual motif that the female figure does not have a mouth, again prohibiting her from full expression. You cannot help but be reminded of gun culture and violence in America upon viewing the painting; it is subtly haunting and boldly arresting. 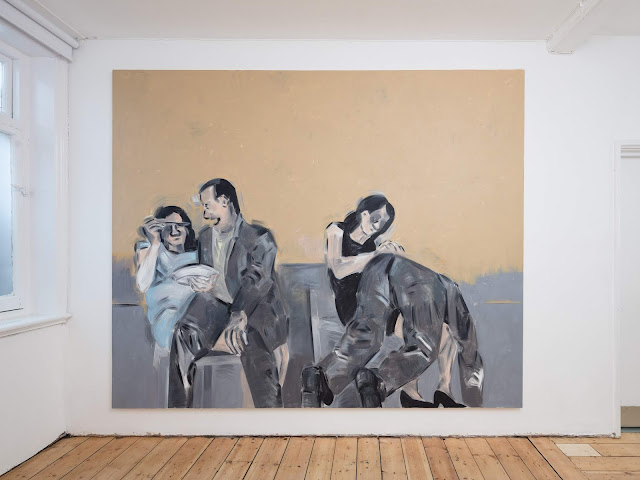 Moments of solitude and exposed shame are prevalent and the public/private divide is an interesting after-thought in the quiet space of the gallery. Many different scenarios are implied but never fully illustrated, and if they are not implied they are something of a 'media res' moment, where it feels like a soap opera has been paused. Gender relations are touched upon too, as men find themselves in vulnerable emotional states whereas Georgiou's women are in confused and confusing plights of power and dominance. One darkly comical example of this is the untitled work pictured above, where one woman is feeding a man like a small child and another has a motionless male figure bent over her knee. The press release speculates that the second man is dead, but it seems more likely that he is another unruly overgrown toddler.

Absurd but still somehow likely scenarios are what makes 'From My Heart' so much more than the otherwise visually appealing painting techniques that form the paintings. Given that his work has been exhibited across the world consistently for many years reinforces the idea that Georgiou is creating something of a universal visual language that we can all relate to from our memories and ideas of fact and fiction. In these times of precarity and possibility, isn't merging the domains of fact and fiction a truly relatable and progressive method of contemporary art making? It is a case I would argue strongly for.