In this interesting and intelligent exhibition, Amsterdam, Istanbul-and-Seoul-based artist Fahrettin Orenli presents a body of work made over a period of a few years as a visual discussion of the ways in which architectural, and other, structures are crystallisations of social and economic issues. Given that these are presented through the additional lens of the contemporary artist's eye provides space for the results to be amusing and creative rather than purely matter-of-fact. The artist is based in three different cities, which is something that I believe adds yet another layer to the work, as his ideas exemplify a universal city or conditioning as opposed to being modelled on one particular geography.

Consisting of sculpture, video, sound, light-based art, poetry and installation, it is safe to say that the exhibition is thorough and incredibly well thought-out, both in terms of the artist's practice and from a curatorial perspective. Some of the imagery is rather startling, such as the mixed media piece 'The City Tree, Lost Soul Collector' from 2015, which resembles a huge ship, not unlike a slave ship, which also presents itself through optical illusion as we can identify computer components and a tree formation. Placing the computer and the slave ship next to one another makes a stirring comment on exploitation and the de-humanised state of the [post-]internet age and makes Orenli's stance very clear; Pi Artworks' location just off Oxford Circus gives the notion extra bite. 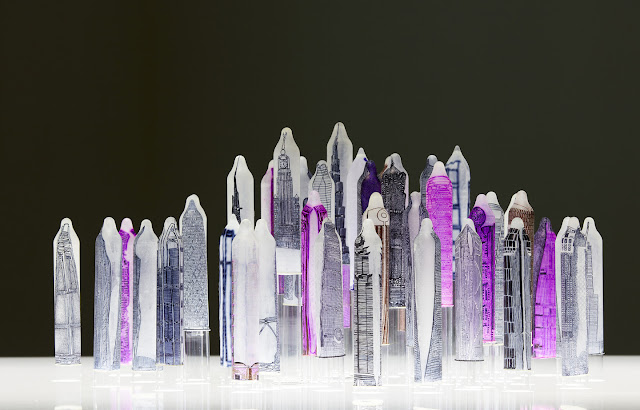 The exhibition's sculptural centrepiece, 'High Heels' dodges any meta aesthetics by being a transparent remark on the phallic nature of not only urban architecture but its cut-throat practices with its use of condoms as medium. We can see dense populations in megalopolises reflected in this particular piece, and every so often the entire gallery descends into total darkness, allowing the table on which 'High Heels' stands to be the very main attraction. Of course, the condoms standing poker straight of their own accord on top of a bright white light is sublimely absurd, and as such we are reminded of how alarming it is that corruption in financial industries is in plain sight. 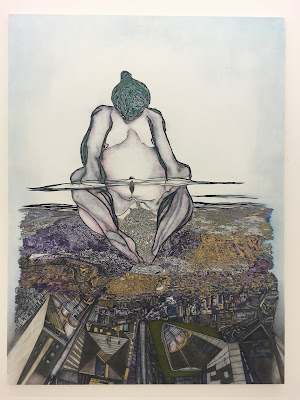 The adverse relationship between mankind and Mother Nature is asserted in the stunningly intricate piece 'Mother Nature, Birth of Another Bastard City I', highlighting natural trauma as well as socioeconomic ones. In the image, a large naked body is swamped by a flood of people, homes and expanses of space overwhelming the figure. The idea of Mother Nature being present at the scene of a city's 'birth' is puzzling yet her bewilderment is soon evident. Naturally she is naked, however this vulnerability serves to accentuate the struggle to survive. Orenli's regular return to architecture and its biopolitical ideologies brings the exhibition together succinctly and impressively; Pi Artworks' press release describes how the artist is "perceiving them as control towers for the distribution of mass information", which is surely the best summary.
Labels: art art gallery artist canvas central london contemporary art installation light mixed media sculpture