Of all the social issues in contemporary art that need addressing in order to keep the field relevant, fresh and engaging, those pertaining to class divisions just aren't sexy, they don't get airtime, and when they do it is often abstracted or 'meta', when more than ever it just needs to be accessible. For his latest solo exhibition at Southard Reid, W1D, 'Chippy' is outlined under three definitions: a chip shop (abbreviation), a carpenter (colloquial use) and the feeling of being "aggrieved, [which is] usually applied to a constantly sour-faced moany working-class person" (adjective). This working class identity is autobiographical for the artist and prevalent for the show,  an angle which many artists won't touch upon mostly through their desire to escape it.

Southard Reid is split between a ground and first floor; both levels take a domestic form, in no small part due to carpentry-inspired sculptures. This fusion of carpentry as fine art draws the viewer's attention to the disparity between the work of a carpenter and that of an artist, at least through a societal lens. Although the former obviously has a much more functional purpose, the latter being seen as more noble suddenly seems borderline obscene, or at the very least classist. In 'Chippy', seeing furniture-style works as sculpture acts as a satire for this, and the working class view into contemporary art, galleries and the market becomes a point of departure and discussion. 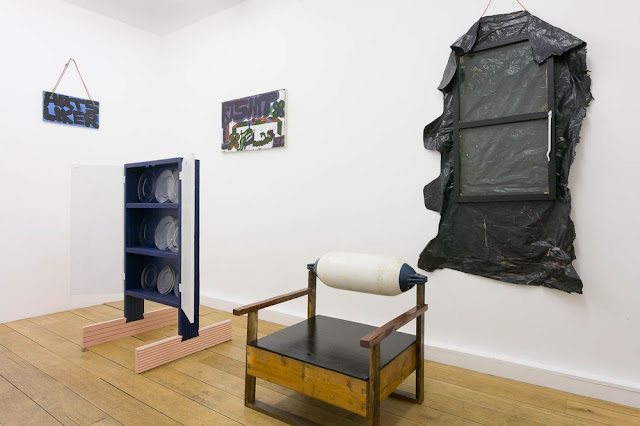 
The paintings in the show have a Bob and Roberta Smith feel to them, in that they use text boldly and directly; 'Arts Liker' spoke to me on the intimidating reality for working class people, young or old, to not only enter the art world but feel comfortable within its spaces. Despite the fact that the vast majority of London's art galleries are free entry, the etiquette and expectations are so patronising that most people will not take advantage of the experiences on offer. Whereas the phrase 'arts lover' is expected and regularly used, the title of Jones' painting implies that one can feel ill-equipped to deal with the art world, whether this is from lack of experience, qualifications or purely class standing. 'Arts Liker' is such an uncomfortable terminology, to say and to read, that we are placed in this bizarre position of uncertainty and parody; the painting works on many levels.

'Poor Mirror' is another highlight, whereby a "reclaimed shed window" is layered with a bin bag, therefore in a functional world the viewer would look out into trash, or in the form of a mirror would look in and see trash. Jones' exhibition is at points dramatic but it feels timely and worthy, at a time where the window of opportunity into the arts for working class people is rusted and stuck. The exhibition's press release only amps up momentum and anger even more, stating "it's so unBritish to say FUCK THIS cycle of deference and serfdom. NO MORE POVERTY, NO MORE OVERLORDS AND OVER LIES, IT'S NOT HEALTHY"; refusing to be polite about a struggle or plight is progressive and encouraging to witness in a Soho space. 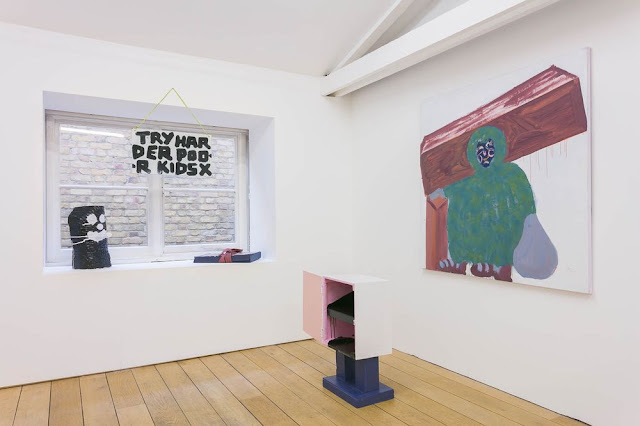 Again with reference to the press release, Jones discusses how the chip dinners he enjoyed as a child now make him feel fat and poor; using symbolism to perpetuate a working class stereotype translates into his practice and back into real life. Alongside chips, the smoking figure, which entirely differs from the glamorous Hollywood habit, is found in the sculpture 'Smoking Chippy', which is in my favourite segment of the exhibition, in the first-floor window with the powerful 'TRY HARDER POOR KIDS' painting, a piece that could happily open or close the exhibition but either way summarises it succinctly. Both tongue-in-cheek and genuine: try harder, fuck adversity.
Labels: art art gallery artist carpentry central london fine art london painting sculpture soho working class