A brilliant quote from twentieth century artist and literary critic Bruno Shulz sets the scene for this quirky yet well considered solo exhibition by London-based artist Kim L Pace at Danielle Arnaud, SE11. The gallery is based in a beautiful house in Kennington, south London, and given the traditional utility factor of ceramics, Pace's medium of choice, the domestic setting is a good suit for the artist's first solo show.

The quote in question is from the 1934 text 'Treatise on Tailors Dummies', where Schulz describes "a species of beings only half organic, a kind of pseudofauna and pseudoflora, the result of a fantastic fermentation of matter", also a succinct way of describing Pace's work. Bizarre personifications of vegetables exemplify the close proximity of human and non-human life, and suggest an awareness of the natural environment which is urgently missing in areas such as the city. Curation styles are interesting and varied, either in perspex boxes, hung traditionally on the walls, or on top of furniture such as wardrobes on the first floor of the gallery, like features in a bedroom. 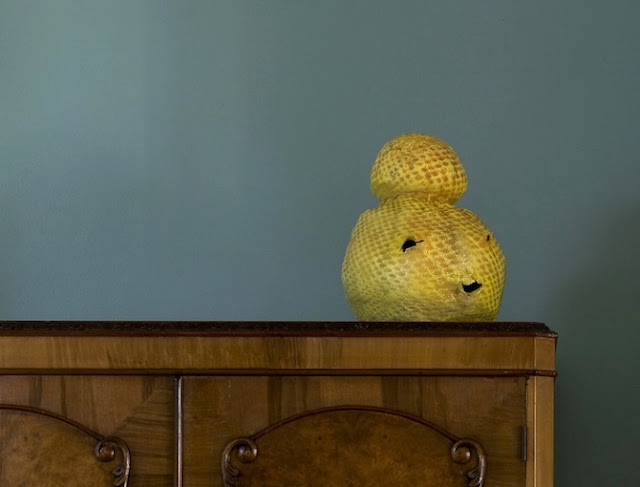 With smaller works like 'Cultivar (Major)', pictured above, their positioning is tasteful and highly playful, especially given their quaint expressions coming from their makeshift faces. Looking over from its place on a cabinet, we don't know whether we are creeping up on them or them us. The artist does not simply convey an artistic personification of static beings, she also incorporates other amusing ideas, such as the neighbouring phallic series 'Fecund Tips', with their startled expression and pointed edges. In the 'White Room' we find one of the show's highlights, the understated but charming 'Couple', another piece comprised of two parts, with one figure coyly concealing its own "genitalia", satirising human behaviour once more as, naturally, the vegetable has none.

Mythology and a mild witchcraft aesthetic come to play regularly, such as the concave part of the White Room showcasing the 'Mask' series, which are comically too small to be functional but with pointy features and stark facial expressions, they really draw the viewer in. Cacti are also a recurring motif, and upstairs the 2015-2016 series 'The Cactaceae' is a collection of watercolours documenting a cactus protagonist going about its business in the vain of a human. An accompanying glazed ceramic sculpture is delightfully realistic and looks like it has jumped out of the painting and is trying to walk away. This fantastical and at times uneasy relationship between mankind and nature is addressed frequently and is unavoidable while enjoying Pace's work, regardless of how amusing and easy on the eye some of the sculptures are ('The Vegetational Brotherhood' is certainly titter-worthy with its gendered double-entendre suggesting the idleness of men as they sit, shrug and chat leisurely amongst themselves). 'A Fantastic Fermentation of Matter' is a range of fun, bizarre non-human characters who are vying for the attention of their human observers, enticing us into a world of fantasy combined with small doses of harsh reality.