Much like life, contemporary art does sometimes have to be fun. It just does. If not, we're trapped in an over-academicised field isolating people and not engaging with new audiences. Marvin Gaye Chetwynd's work is definitely fun, and although the work is framed in the show's press release at Sadie Coles HQ, W1, its silliness, wildness and amusing nature is hard to miss in the gallery, which itself is spacious and accommodating to any given artwork in a prime central London location.

As a female artist, it feels like there should be some kind of resulting analysis about Chetwynd's work in regards to this, especially given that her name throws viewers off the scent. However gender-based analyses of contemporary art can risk being tedious and often forced; there is something to be said for the exhibition's title being two gender-neutral pronouns, according to the show's press release, "as symbols of inclusiveness and possibility", but this does not seem to have much to do with the content of the show. Sadie Coles HQ recently hosted two international galleries as part of the Condo Complex 2018, Glasgow's Kopper Astner and Madragoa from Lisbon, yet and both felt like guests in a sub-letted space. Chetwynd's work is so theatrical and outlandish that it not only crosses the borders of painting, sculpture and performance, it also makes us feel that contemporary art really can be inclusive and open. 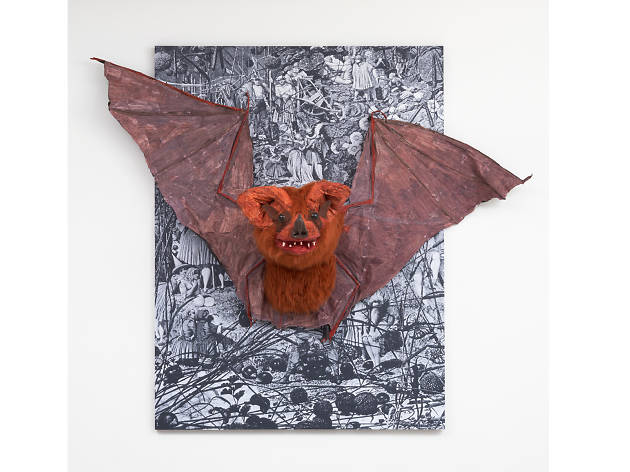 Some would certainly argue that my prior comment is somewhat a stretch for this show, but merging eye-catching, off-the-canvas aesthetics and features with moments from art history as a literal background is a compelling combination. Citing and re-appropriating works from as long ago as 1 BC in addition to her own oeuvre is ambitious, especially to those new to the artist's work. 2018's 'Jesus and Barabbas (Odd Man Out 2011)' is a prime example of this, whereby Chetwynd references a performance she produced some seven years ago, while presenting a mixed media piece of positioned demonic-looking sculptures on top of a photocopied canvas.

In a supposedly post-internet, post-human world, I enjoyed seeing human figures, animals and anything in between fused into Chetwynd's work at Sadie Coles; the lack of needing to be explicitly classified is refreshing and permits an enjoyment of the art on a level that is accessible and entertaining. Merging themes of life and death then natural and mythological or historical figures brings fiction and reality together harmoniously and makes the viewer consider what the future may hold, whether in terms of contemporary art or, indeed, the human/non-human dichotomy.