American artist Joel Kyack switches himself on to the needs and desires of "the people" in his practice, whether this refers to the general public or themes in the art world, two things which seem to be becoming closer intertwined with every passing day (one would hope). Combining sculptural installation, video and painting, Kyack's solo show at Workplace Gallery, W1S, is very much the artist's experimentation ground in terms of media and authorship. By incorporating the natural environment, the figure of the artist himself and intrusive installations, the viewer is left with no doubt as to Kyack's intentions. 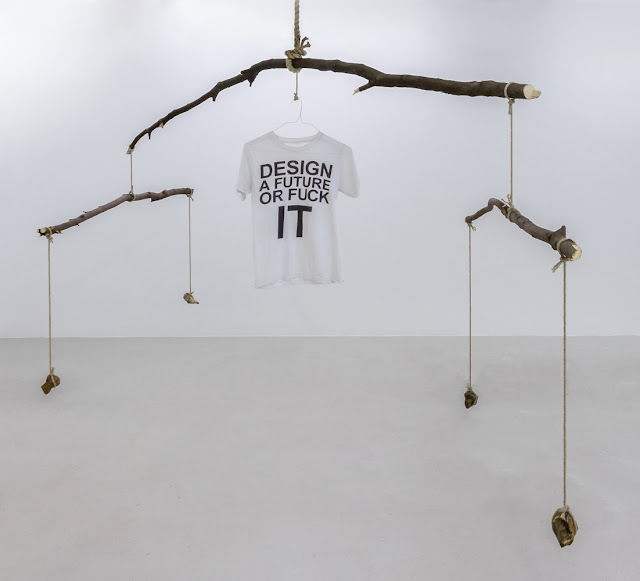 The contrast between the artist's fun and compelling work and the blank space of the white-cube gallery space serves to amplify Kyack's artistic vision and voice further. Upon entering the gallery the first piece we encounter is 'Design a Future or Fuck It', a highly self-explanatory installation which fuses banal materials with a fashion garment adorning the title. There are many levels of intrigue to the piece; aside from its central bold statement, the use of a hanger is reminiscent of lynching practices in America during the late nineteenth and early twentieth centuries, as a stark reminder of the nation's recent past and current political predicament. A t-shirt reminds the viewer that metaphorically "designing a future" comes from personal actions and resisting violent acts, gestures and language at every opportunity.

'Design a Future or Fuck It' shares the first gallery space with 'Johnny's Garden', a painting  bearing great blank spaces, allowing the viewer to partially interpret the scene as they wish. The piece features a primitive man smiling and urinating into a river; no civilisation, no intricate realism upon the canvas but the figure appears to be largely content. The work is propped up by two cast human skulls, symbolising the artist stripping humanity down to the polarities of subservience and freedom. 'Johnny's Garden' is a poignant contrast to 'Design a Future or Fuck It', provoking the viewer to ponder upon authentic freedom and genuine happiness, and consider their respective subjectivity. 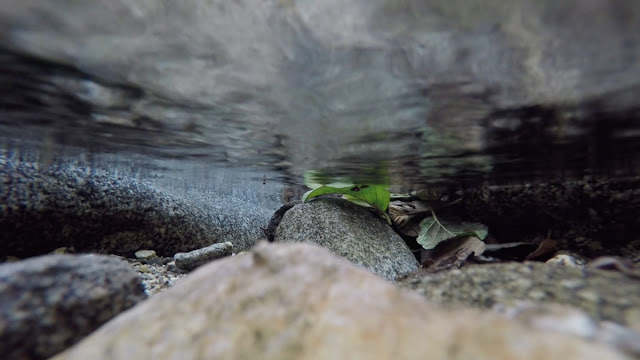 
The work in the show is consistently chaotic yet deeply engaging, so it is certainly advantageous that there are only five pieces in the show; the eponymous work is a dual channel video work of underwater footage of a shallow river, where the water moves at the top of the screen. At a time of complicated political situations having a domino effect on other aspects of life, the tranquility and cyclical repetition of the video allows us to take a step back and observe the underwater microcosm. The exhibition is concluded by 'Self-Portrait as a Fountain', a c-print of the artist drinking from a juice carton while simultaneously urinating in a river. Kyack's constant presence at Workplace through his work is affronting and bold, never moreso than his appearance in 'Self-Portrait as a Fountain', whereby the natural environment and man's imprint upon it is undeniable due to the composition of the photograph and the figure's dominant stance.