Female artists toeing the aesthetic line between the sweet and the sinister thrill me as an art lover. This fabulous solo show at Brixton's Block 336, SW9, does exactly that, keeping the viewer tantalised and fascinated by combining sickly sweet palettes and common motifs of despair and shame. The show is comprised of Greenwood's paintings, works on paper and an impressively scaled installation, through which the viewer is invited to meander. Each element of the show is seamlessly linked, through visual codes, themes and palettes alike.

Jane Hayes Greenwood, Lead Me Not Into Temptation, 2017. Image courtesy of Block 336.

Having visited the space before, I am in awe of Block 336's versatile and fairly extensive space; its curators repeatedly find new and interesting ways of showing off artist and architecture concurrently, and 'Lead Me Not Into Temptation' highlights this strength once again. Malleable room dividers separate the space in non-linear ways, so that we are making our way through the gallery and encountering works from different angles. The first of these is Greenwood's paintings, which set the tone perfectly, using a style which lies between pop art and cartoon aesthetics. As a symbol of the Fall of Man, the artist's use of the apple with a bite taken out is both powerful and aesthetically pleasing, and the show as a whole has values which are both commercial and purely for public exploration, which is bizarre to consider but does make sense given the range of artwork. 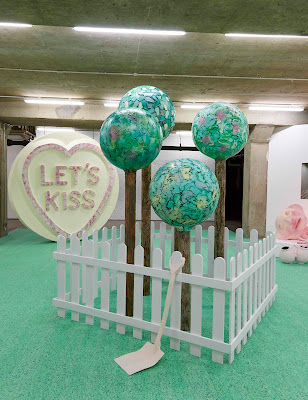 Jane Hayes Greenwood, Lead Me Not Into Temptation, 2017. Image courtesy of Block 336.

Although the work has a great sense of familiarity, the installation segment is highly surreal with a hint of nostalgia, thanks to the gigantic love heart sculpture and cartoonish trees, as if plucked from a charming children's television show. Navigating through the space, the viewer encounters the bitten apple once again, this time in the form of a CGI video of the rotating fruit on a rectangle screen; this marriage of technology and the depiction of nature adds to the surreal potency of the installation, along with the bouncy soft green flooring which has visual texture but jarringly lacks the authenticity of real grass, thus creating an experiential dissonance.

Greenwood's ability to nudge the viewer through false symbols of recognition and superficiality makes for an effective exhibition experience; her work certainly functions best in a solo show capacity. The large 'Let's Kiss' sculpture as a re-modelling of the popular love heart confectionery is an example of my favourite element of the exhibition: the shame surrounding female sexuality. The bitten apple is of course the catalyst for this, yet various other notable images reify the confusing societal norm that women have less rational desire than men. 'A Sweet Tooth' is a small etching which is later transcribed as a painting version in the show, and it depicts an illustrated man and woman using various objects to conceal their genitals. The whole piece looks frantic and somewhat rushed, conveying the need to keep relations secret.

Range in Greenwood's oeuvre, while simultaneously keeping things consistent and digestible, makes the show really shine, and a wide range of audiences will thoroughly enjoy the work for different reasons. The artist manages to formulate interesting ideas and discussions, such as the repercussions of misguided 'facts' about female sexuality for contemporary feminists, without delving too deep towards a fully-charged political exhibit. Jane Hayes Greenwood creates work that is good enough to eat, but bold enough to reflect upon long after swallowing. 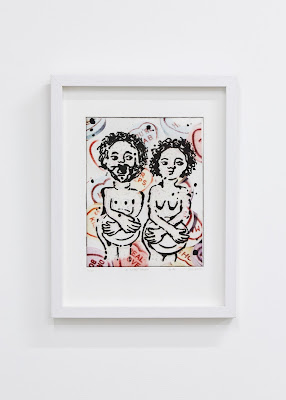