This vast and lively group exhibition at Koppel Project Hive, EC1A, features an array of well-known contemporary artists in a range of media, including installation, photography and video. It is stated in the accompanying text that the works have been "curated as points in a nonlinear narrative", which instantly makes one think of the role of the curator in this case. Is this statement a self-reflexive satire on what curating actually is? These ideas stuck with me throughout the show.

As aforementioned, the exhibition is incredibly lively and engaging; while at points this can make it difficult to divide your attention equally, it does allow the viewer to decide which parts of the show, and which artists, they gravitate towards and take most from. This becomes most prevalent on the initial, ground floor, where Andrew Mealor's large-scale earthen sculpture 'SWOC-Matrix/Acid-Reflux' makes a bold physical impression and Yuri Pattison's moving image work is certainly captivating, however on a personal level it is Hannah Lees' mixed media sculptures which are most compelling. The London and Margate-based artist's series, 'Ignore. Fail. Read. Succeed', is clearly highly appealing to a millennial audience, with its use of short, sharp words in its title and its composition being various matter pressed into a panel heater, including tobacco, makeup and flowers, somewhat resembling a more aesthetically pleasing Tracy Emin-style documentation of personal habits. 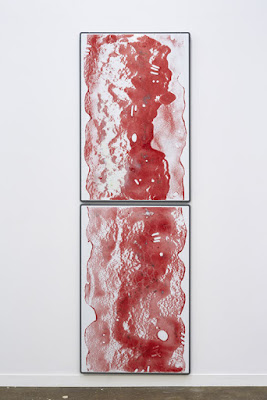 In the basement, a selection of films, large-scale installations and high-impact works form a cavernous little retreat for viewers, and with a range of themes and ideas, the space is highly stimulating. While there sometimes seems to be little uniting the works, the gallery supplies a definition of the ‘hive mind’, which within science fiction is “a unified consciousness…formed by a number of alien individuals”. Merging alien unfamiliarity with recognisable motifs and aesthetics certainly brings the pieces together in a beautiful, if not profound, way; a fine example of this is the talented Jala Wahid’s digital prints ‘Mallow I and II’, which employ the artist’s distinctive gooey sculptures in photographic form, conveying a fleshy materiality in a bizarrely static medium. 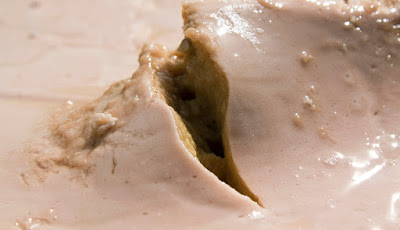 While the scale of some works are impressive, it is the smaller works which really shine, and at times this is literal. Bryan Dooley’s ‘The Last Self Help Book’ is a collection of water bottles with a halogen light, water, vitamins and an automatic light timer which alludes to mankind’s impact on the earth. The potency of the lights ebb and flow much like candles but the fact that they are visibly attached to a plug socket gives the piece an interesting edge. Bora Akinciturk’s small piece ‘Amber #49’ is a beautiful yet fairly repugnant, much like Wahid’s work, display of nature and 'disposable society' culture, showcasing a transparent epoxy cast holding various items recognisable from urban trash, including a Cheetos bag, cigarette butts and flies. The piece fits wonderfully with Hannah Lees’ pieces on the ground floor and similar ideas are prevalent in the exhibition. This ambiguous, and ambitious, curatorial strategy becomes a significant element of the show in itself, as the space of reflection between works becomes a place for the viewer to investigate art in a gallery space both intriguingly tranquil and chaotic.