Curated by Carlos Noronha Feio, 'Wild Flowers' brings together several contemporary and modern artists with, as can be expected, a motif of flowers, which might seem like a summer filler during London's art drought over August, yet the work truly is engaging with a great variety and an array of names familiar to anyone following the increasingly globalised art scene. The show is impeccably curated, optimising narrative projects', W1W, space.

Additionally, we find a nice range of media as well as artists, and most artists have multiple works spread out between the rooms of the gallery to create a smooth curatorial for the viewer, although there is no thematic difference separating the first and second room. Works are not solely confined to the wall either, as we find with the highly functional piece 'Blue Vase' by Neil Haas, incorporating contemporary art and interior design in the form of a drawing over a Venetian blind, using the innocuous symbol of the flower to highlight gender stereotypes in the home. 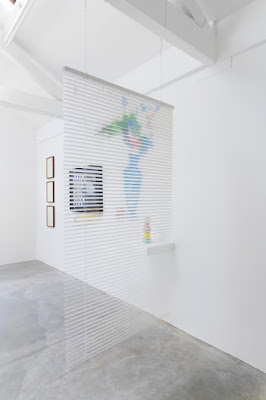 The range of ideas presented by the different artists, in addition to media used, makes the exhibition a highly refreshing and enjoyable one, whether you are looking at it theoretically or merely on an aesthetic level. Russian artist Georgy Litichevsky intriguingly breaks with the notion of a flower as an inherently delicate, feminine symbol; instead we find acrylic works showcasing the natural merged with the mythological as the flower takes on animated, beast-like features. Their titles provide clear  insight: 'Flower with Saws' shows a violent, destructive flower toting chainsaws and 'Flower with Hairy Face' provides a thrilling satire on the societal norm of the hairless woman with an exaggerated hairy flower, which of course provides its own humour. With different personas, the mini-series appears like a static version of Snow White's seven dwarves.

Fun and entertaining works are combined with the sort of art rarely seen in contemporary exhibitions; Haas' Venetian blind piece is a preliminary hint at this, and it is concurrently nostalgic and calming to encounter drawings heavily inspired by Victorian cataloguing protocol, namely botanical drawings. Harm van den Dorpel's 'Thistle I' is a fine example, a simple ballpoint pen drawing of a thistle plant which immediately grounds the viewer and provides the visitors of this busy London district with a reminder of the potency of nature despite its often small scale. Given that van den Dorpel is an abstract artist, this provides the piece with an even higher air of delicacy and pure fascination. 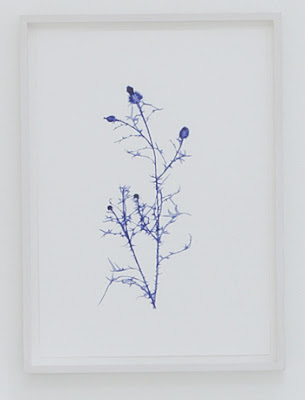 Although several works here are quaint and beautiful, there are also some fantastically dynamic pieces, especially Norwegian artist Marte Eknaes' video work 'Visions (Rainbow Rose)' from 2012, which uses technologies utilised by the military for developing weaponry to showcase a 3D modelling of a flower. While the concept seems fairly straightforward, it is the bold geometrics, quick movements and 360 perspective that allows Eknaes to formulate a real possibility into what the future holds for nature. While the 'rainbow rose' is a wonderful symbol of man's desire to be a godlike figure in the world, in a more abstract sense, the work suggests a midpoint between nature and technology: can the latter prevent the extinction of the former? 'Wild Flowers (Wildness is Contextual!)' to an extent also looks to investigate this question, and looks back to historical artists' awe of nature, yet there are no works in the show which date earlier than 1975 (and this is Richard Hamilton, so something of an anomaly). This leaves us with an analysis of how our outlook on nature has changed, and who better to present this visually than a selection of today's most talented and innovative international artists. 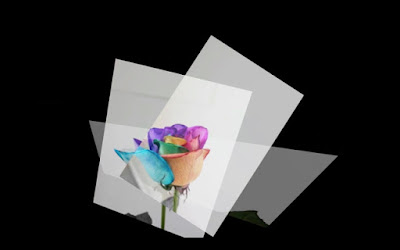