Entering Jupiter Woods, SE15, is a special experience on two levels: firstly, the acknowledgment that the gallery is integrated with a residential space, so the artworks are in close proximity to people living their lives, which to me is a great symbol for accessibility in visual art, and secondly the fact that 'Displays of Affection/In the Waiting Room' is comprised of video and sound work, so the space is uninhabited by physical works. This means that the viewer, almost habitually, will move around the gallery as if observing multiple things with the eye, when it is actually the ear working with the eye to fully comprehend Melia's narrative.

The concept of the exhibition will be highly relatable to most of Jupiter Woods' audience, as it is focused on the dissolution of a relationship, where arguments build upon arguments and repetition is employed in place of logic and reason to fight to be the one who is correct, in a bittersweet battle of minds and hearts. A compelling video work accompanies the sound piece, the latter of which interchanges between a dialogue documenting this fractured relationship, and a version of the song 'All of Me', sung by Janal El-Goni, resembling a Coco Rosie song in its isolation and drawn-out emotion. 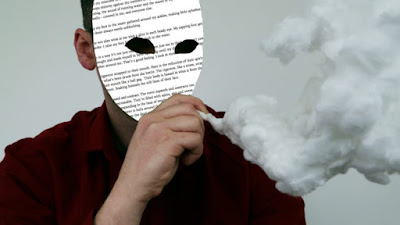 The exhibition's title, which is simultaneously being presented at Cordova in Vienna, creates an immediate tension between itself and a relationship breaking down into anger and rage. As is the nature of a sound piece, words of disdain and frustration fly through the air like an invisible sculpture, attacking the senses. While concentrating on these words, perhaps with our eyes darting around the gallery space, we again remember that we are in a domestic environment; this heated exchange could be taking place anywhere, but, again contrary to the show's title, Jupiter Woods feels intensely private. It is also easy to identify psychoanalytical takes on the breakdown of a relationship, as the male character states "you understand my language, you use it against me", suggesting the falseness of a break-up in the same way a public display of affection might be inferred as such. 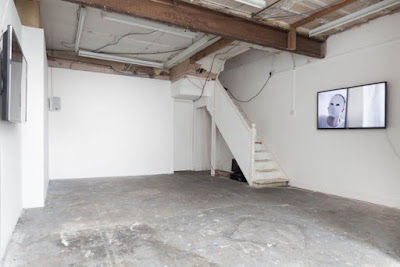 With its distinct lack of a physical presence in the space, we retreat to the video piece, which is jarring to us as we instinctively seek bodies to attach to the dialogue. Instead, the film's futuristic white environment, matching the gallery, spreads to the faces of the figures, as they wear a blank, or translucent, mask. Sound and video are not mutually exclusive in the show, as we hear the female character state "I don't feel connected to anything" as the film's figure takes a shower with a blank white face, devoid of features, therefore forcing us to rely solely on bodily gestures to judge its intentions.

There seems to be a great deal of importance in negative space in 'Public Displays of Affection', in that the viewer must infer from what they cannot see or understand. This reliance on the aural sense helps further broaden the idea of what visual cultures and fine art have the potential to be, not only to the artist and curator but to diverse audiences. Incorporating music via 'All of Me' reinforces the difficulty of a relationship falling apart before our eyes and ears, as El-Goni's beautiful voice ensures we hear every word and its implications; lyrics such as "you took the part that once was my heart", illustrate a visceral physicality through sound, making the show a full and engaging experience.