Norwegian, and even moreso Scandinavian, painting enjoys a reputation which is highly coherent with the region's way of life, and whereas stereotypes usually purposed to bear negative connotations, the Scandinavian place in the history of art is pan-historical and recognisable, much like their natural landscapes. But with this background, and given the diverse context of the contemporary art scene, how do artists from Norway, Sweden and Denmark adapt appropriately, embracing their own work and that entrenched in their culture?

This seems like a stale question to ask, and is certainly applicable to all cultures and nations, but the mysticism of Scandinavia makes the possibilities of this interpretation particularly interesting. The collaborative element of some of Sverre Bjartnaes' work featured in 'Silent Conditions' at Beers London, EC1V, somewhat reflects the shared way of life prevalent in the nordic regions. The show is comprised of a range of media, under the umbrellas of video, sculpture and painting, but it is the latter two which showcase the artist's talents most effectively. 'Sculpture by the Sea II' is a clear example of this, as its bold palette and evident allusions to modern art greats present a coherent linear journey resulting in the artist's current practice. Developing his work through the exploration of media, this painting is a true piece of evidence that Bjertnaes puts painting and sculpture in conversation with one another, and the results are visually stunning. 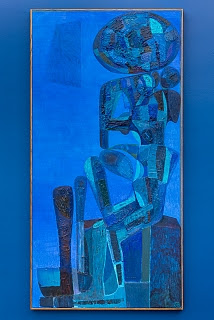 Beers London's walls have been painted beautifully for the occasion of the show, and with the inclusion of some intricate yet bold bronze sculptures, 'Silent Conditions' could easily be a micro museum exhibit. Familiarity is a running theme here, and 'My Years as Dog', despite its hard, dark surface, is a reminder of the artist's inevitable influences, especially domesticity and the sense of home. In contrast to this, Bjertnaes is clearly also inspired by surrealism and its landscapes, and combining the two again produces comparisons to Scandinavian culture, a distinguishing feature of which is its sublime landscapes. 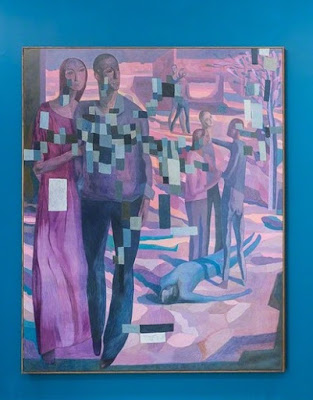 It is important to note that this exhibition is not on the subject of Scandinavian culture, yet just an element of biographical detail I happen to find interesting. Another element of this intrigue derives from the fact that the work does not feel quite as contemporary as it could; with influences from modern art prominent across the exhibition, the realisation of how diverse contemporary art can be dawns on the viewer. This is an era where nationality of the artist is less relevant than ever; while it is nice to offer conjecture on Scandinavia and their unique culture and landscapes, this is not a powerful force in this body of work. Observing figures roaming aimlessly around canvases and abandoned animals at times emaciated, we are transported back to a very urgent present. With additional visual stimulation of warm, bold palettes enveloping canvas and gallery wall alike, Bjertnaes makes his UK exhibition debut with a body of work that is both beautiful and engaging. 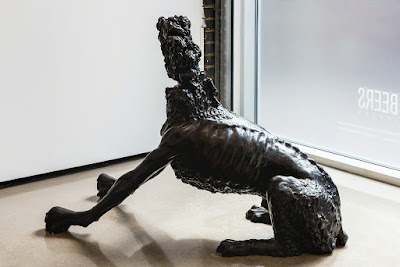