A resurgence in the use of paint aids our appreciation of its rich and versatile materiality, and the difference in reception between small and large scale works. Combine this with the new and intriguing ways in which contemporary artists work across disciplines and we are entering a whole new world of painting. Naturally, subject matter plays an important part in this too, and the figures found in London-based artist Grant Foster's new body of work at Tintype Gallery, N1, are not straightforward; at times analysing them feels psychoanalytical.

'Ground, Figure, Sky' is comprised of a series of paintings and sculptural interventions in the form of flags made with either canvas or leather, the latter dividing the exhibition rather neatly. Before encountering these, there is a range of small and large paintings forming the majority of the show. A personal highlight was the first, 'Vanity', with its focus on an ambiguous facial expression and a majestic sweep of hair flowing across the top of the canvas like a flourishing tree. The painting's title and its content seem to be a subtle contradiction to each other, as the figure has a placid face, one which could be dreaming, or maybe lamenting. Equally, given the show's title suggesting a sliding scale, 'Vanity' could be depicting a contrived 'selfie', as the pose is up for interpretation as a contemporary self-portrait subject often is. 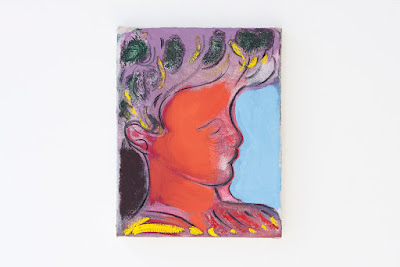 This ambiguity is played out again in Foster's other paintings, as there is a great focus on the physical attributes of each figure. For instance, the two works which follow include shapely, bodacious bodies, thus drawing attention to these parts instead of the faces which are often sinister or entirely devoid of human features. 'My Mum and Dad' is a particularly interesting piece, as again the title throws the viewer off from what is in front of their eyes. As the show's press release states, the artist enjoys creating a dialogue between the old and new; while this piece is by no means a traditional ode to one's parents, the shapes produced on the canvas are reminiscent of  Rodin's 'The Thinker'. Both figures look away from the viewer, yet simultaneously expose their bodies, which almost feels like the outcome from a life drawing class. 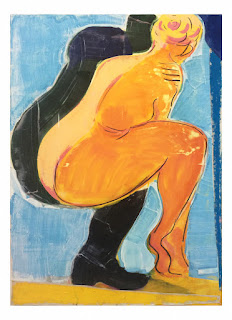 Of course, in painting context is not mandatory - we do not need to know the reasoning behind Foster's bizarre depiction of his parents; it is an artist's prerogative to withhold or reveal this information. With the use of makeshift flags, as aforementioned, there is a default assumption about its form and function, especially with the rise of nationalism across the West. These flags are murky, sketchy and quite a contrast to the paintings on display; the words 'PIG' and 'SUN BURN' smeared across them respectively are bold and confrontational, yet with the latter a worn, perhaps sun-damaged photograph of a mother and child is a reminder that family ties are never far away from one's true identity.

Returning to the faces of Foster's figures, none is more disconcerting than the concluding image of 'Ground, Figure, Sky', where we realise that the energy spent deciphering each scenario means that these figures represent different elements of our daily lives. 'The Prisoner's Dilemma' is harrowing for a multitude of reasons, one being the pigment differentiation between the cheerful, charming palette of the background and the deep, dark, shadow-like appearance of what seems to be a child. Is this the ultimate example of Foster's 'Ground' characters? The figure's downward glance at its own hand implies an introspective ability, and the title has the viewer considering that the painting deals with mankind being a prisoner of our own minds, which is generally a very different tone to that of the rest of the exhibition but a thought-provoking one nonetheless. Truly, that is the beauty of this exhibition, the often sporadic ways in which these paintings are composed and, intriguingly, reflected upon by the viewer. Though the continuity is often hard to locate, the use of human form brings back any secondary abstraction and allows a strong balance of understanding and intrigue. 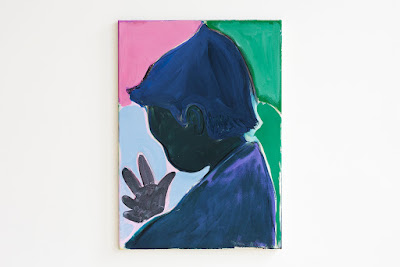