Space In Between: Nicole Morris 'Sisters' (until 8th April 2017)

NB: Space In Between is no longer functioning as a gallery space.

For this uplifting show at Space In Between, E9, the fact that participating artist Nicole Morris is London-based does make a significant addition to the exhibition. This is due to the large factor urban life plays in Morris' work, particularly in 'Sisters', where fabric installation and moving image are used in a dominant and overlapping way for purpose. Additionally, whereas it is common for art industry writers to state that certain female artists work with and around "the body", here we find that it is the gestures made by these bodies which become the interest for Morris, and in making this distinction, we identify the body's gestures varying from significant to bearing architectural tendencies.

The scale of 'Scaffold', which is architectural in both name and form, is the artist throwing her arms around Space In Between. This is the first and most bold way in which we find this show to be unpretentious and warm, and Morris' ability to communicate the importance of relationships in all their forms. A protective arm covering the viewer from the gallery window evokes a feeling of calm and happiness that is easily associated with a sisterly bond. Additionally, as the artist's work also investigates these relationships in the urban environment, the title of the piece suggests a space under constant improvement, reconstruction and challenges, interestingly showcasing how relationships mirror architectural developments in the metropolis.

Moving image and fabric coming together highlight intergenerational support networks, using fabric as a symbol for craft and pedagogical values in the family unit, reaffirmed by the homemade aesthetic of the artist's illustration in the film and the 'colouring in' of 'Scaffold'. Aside from this, 'Herringbone' features craft imagery again but this time it is brought up to date with the use of film and installation, whereby the colours of the film are projected through the initial sculptural piece onto the back wall, facilitated by small diamond shapes cut out of the piece. Again the title is an interesting one, as herringbone is a pattern found in fabric as well as being the formation for many road pavements, which effectively ties together Morris' themes of craft, in that it was always considered a lesser, female-dominated alternative to fine art and design, and urban infrastructure and design. 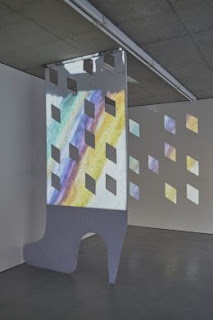 Lastly we encounter the film piece, 'Together'; although it is a focal piece of the exhibition, the viewer's attention is fought for in equal parts but for respective reasons: the imposing scale of 'Scaffold', the visually stunning element of 'Herringbone' and the charming subject matter and centrality of 'Together'. Interestingly, it seems to be the latter which rather pleasantly concludes the exhibition, therefore I did not dispute the order by which I was drawn to each piece. 'Together' features a series of child-like drawings, with a xylophone-based soundtrack which evoked the feeling of being in a school playground. Bringing the viewer back to this moment in their own history is the catalyst for identifying the seemingly simple, pure relationships women share. Of course it is not this straightforward and a scene in the film where two illustrated hands are clasped before drifting apart is a minor but moving symbol of the complex web being unpacked by Morris in this wonderful and cosy show.