At the start of the year, there is often a focus on emerging artists, and this solo show at New Art Projects, E8, continues this trend. Adam Hennessey has just completed a year at Turps Banana Art School, which specialises in training the painters of tomorrow, and 'SMILE' offers a glimpse into the future of the medium, which is especially interesting given its recent renaissance as a response to narratives suggesting that painting being a dead form.

Hennessey's works, over the space of three rooms, immediately baffle the viewer in that we are never sure whether the artist's intentions are serious or fun; indeed, it becomes apparent that this polarity is trivial and actually restrains our enjoyment of the work. Room 3 is confusingly the first room, and presents an interesting introduction to Hennessey's work. Paintings here highlight commonplace objects and sights; again alluding to the silly versus the politically serious, the mundane is made beautiful through paint and similarly the beautiful materiality of paint is transformed into a depiction of something that is both relatable and at times amusing. Many examples of this are found in Room 3, including 'Worm on Banana', which is only truly decipherable from its title, as the piece has the appearance of an old-school video game, or a sporadic pattern sample. With this knowledge, the disgusting reality becomes something normal, acceptable and provokes discussion on why we have this response to the work. 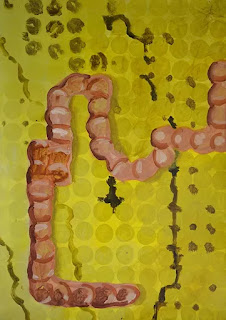 The show's eponymous painting, 'SMILE' is rightly its focal point, as it conveys a complexity which again bridges the mundane, or over-used through popular culture, and a serious message. With eight yellow, emoji-style smiley faces crammed into one canvas, their respective expressions are manipulated as a result. Smiley faces are more recognisable than ever in this cartoon form, not only as the symbol of LSD, but in the way they now blend into everyday lexicon through mobile phones and social media. 'SMILE' could also be seen to allude to mental health issues, in the way that each face is cramped and competing for space, much like the urban condition and problem of overpopulation, causing increasing tensions and frustrations. Likewise, its subtitle could be 'The Many Faces of Happiness', highlighting how mental health issues are still stigmatised to the extent that we find ourselves scrutinised, analysed and often entirely superficially performed. 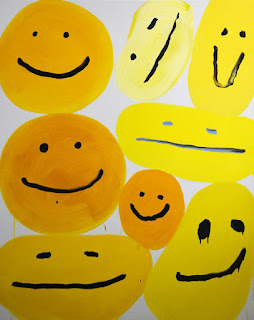 Outside Room 1, there is an interesting acceleration in terms of addressing salient social issues. Where they had been largely avoided in Room 3 in favour of tranquil banality, the wonderful 'Man Perspective' leads the way in showcasing what is happening in Hennessey's world, which we all share. Three shadows of male figures face in the same direction and bear sweatbands across their brows, much like professional athletes. Without identifying the men present, the combination of the title and this heroic stature seems to be a satire on male dominance, as the men almost resemble classical Greek sculpture. Equally, it is almost as if the men are looking to an uncertain future, perhaps one where the patriarchy is challenged and torn down. Perhaps.

From this point of deliberating as to what Hennessey's intentions are, Room 2 sobers the viewer up from the cartoonish fun of other paintings on show, while maintaining the artist's inspired yet distinguishable style. 'Fatlamb', the first piece in the room, highlights in no uncertain terms the plight of beloved animals in the face of mass consumption of animal products. This is another incredibly apt point of  the timing of 'SMILE', as January often brings hope of ethical changes, such as Veganuary and, more generally, new year's resolutions. 'Fatlamb' depicts a drastically and unnaturally overweight but small lamb, a powerful image again highlighting the vulnerability of animals against the ruthlessness of the industry destroying them. Similarly, 'Sheep Murder' sees the artist using paint as a decorative tool for an intense message, which does not always require explicit imagery.

This marriage of the mundane and the politically potent ensures that the latter receives the correct reaction from the viewer. All paintings in this show, regardless of which category they fit into, are pleasurable to the eye, and feel refreshing and familiar at the same time, which makes for a highly accessible exhibition. 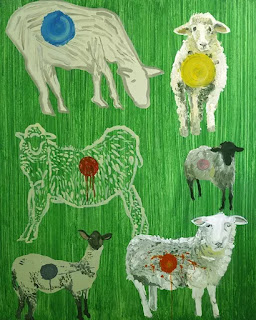