A year of drastic change awaits us in 2017's political realm, and it is entirely foolish for the art world not to reflect this. Sheida Soleimani's work presented at Edel Assanti, W1T, depicts women unlawfully imprisoned and executed in Iran. Given the small, niche area of this issue, giving these women a face and such a bold presence is a highly powerful tool in the gallery space, where their images become immersed in the artist's environment and our attention is fixed firmly on them.

Two media choices are present in the show: photographic framed prints on the walls and the sculptural 'effigies' dotted around the space, with the same women's faces printed, but this time at the height of a kneeling adult, which is symbolic and a poignant addition to the exhibition. Edel Assanti's curatorial strategy in itself enhances the work greatly, as viewers must navigate uncomfortably, which is exactly the initial point of the exhibition: the artist wants to stir you, to irk you, to open your eyes. The first piece the viewer encounters is 'Zahra', a cotton sculptural piece almost hidden in the corner; Soleimain's decision to name each piece after the female subject makes concrete the idea of encouraging not mere sympathy for, but solidarity with, the women of Iran. This is not a television campaign for a charity helping those overseas; the damage is done and the viewer has to listen. Zahra's face is smiling, and the gallery press release tells us that these low-resolution images have been sourced from either government archives or more informal locations, such as the victims' families. It is most likely that Zahra's is from the latter. 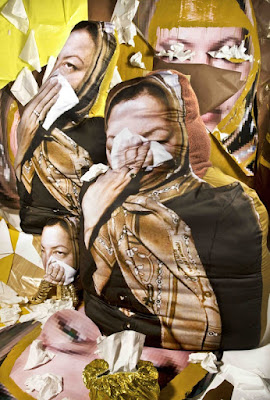 The contrast between the facial expressions, despite the similar narratives behind each piece, is another aspect of the exhibition's potency, and has a harrowing impact. As we contemplate Zahra's smiling face and find ourselves desperate to know and understand her story, we turn to the next image, this time of 'Sakineh', and are again reminded that these are real life accounts, not something to be fetishised or made into a commodity. Where it could be argued that the art product is in fact a commodity, Soleimain's intentions are very clearly to tell the stories of the Iranian women and highlight its gravely flawed, or at least weak, legal system. Sakineh's facial expressions and gestures leave the viewer certain of the artist's desire to raise awareness of gender inequalities and atrocities in Iran.

Exploring these themes is exposed as necessary at this time of 'post-truth' and lost narratives, and the artist's brief showcase of torture and a gravely flawed legal system in Iran is shocking for the viewer. Acknowledging that the artist has taken images from the internet highlights the vast dissemination of information and data online, yet how this is often purposefully ignored due to various political agendas. Ways in which the images should be interpreted through a Western, or at least non-Iranian, gaze is an unavoidable effect of this London location, and what we choose to do with this visual piece of evidence surely reflects our own values. 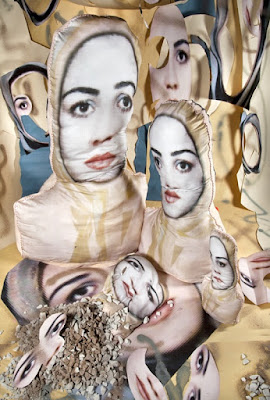