For this interesting setup at Marlborough Contemporary, W1S, Oslo-based artist Charlie Roberts has formulated a new body of work which the gallery have curated in a Salon-style, where works are sold off and replaced by others, to keep the show feeling fresh and constantly in flux. Its title is taken from Notorious B.I.G's 1994 track and sets the tone for what the gallery states is the artist merging hip-hop subculture aesthetics with historical references; while the former is at times difficult to spot, Roberts' painting technique ensures that the work feels exciting and fast-paced, and the simultaneously contemporary and historical visuals are highly effective. 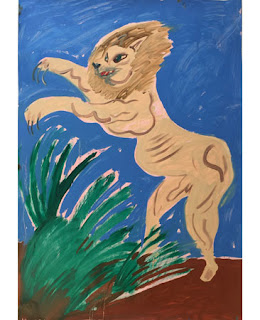 Given the gallery's location in art-centric Mayfair, the novel yet casual appearance of the Salon-style is certainly interesting; the artist's bright, vivid palettes ensure that the viewer's attention is solely on the work present and their ideas. Beyond the theme of hip-hop, Roberts devotes much of his practice to primitive aesthetics and personification of animals, which, in their contemporary forms, are refreshed and certainly reach new audiences in Mayfair, with hints of magical realism. 'Juicy 163', for example, bewilders the viewer by incorporating elements of a lion and a man, to create something new which bizarrely does not seem impossible or frightening.

There are many popular culture symbols used in the show, and the vibrancy of the paint highlights the schism between the high- and low-culture in art; the solution is that contemporary art has parodied and pilloried this idea so many times that the two are easily blended together, which as a result makes the art market a tricky yet intriguing place of investment and movement. Alongside imagery of the nude and evidence of a skewed relationship between man and nature, Roberts' work is an investigation of the human psyche and our attitudes towards that with which we coexist. 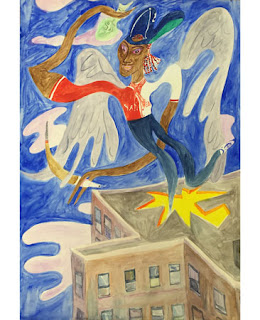 Interestingly, although the artist has a strongly unique style to his work, the various and diverse influences ensure that a range of themes are addressed in the show. Marlborough Contemporary states that Roberts is highly influenced by hip-hop, and does not underestimate its value for contemporary popular culture. Art and music are certainly intertwined and trends are often located in both domains, such as 'vapourwave', which is inclusively prevalent.

As many galleries take a breather over Christmas, Marlborough Contemporary presents a show which is fun and at times silly, but uses paint almost as a disguise from which to unlock more serious tones, such as the perils of nature and animal life, as in one 'Juicy' image we witness a naked female figure watching on as another figure appears to be drowning. There are a great deal of modern art influences in Charlie Roberts' work which will please many visitors and will surely add some festive joy to proceedings.