Inaugurating their new space in St James by Mayfair, Skarstedt, SW1A, has put on a show of two highly celebrated American artists, Cindy Sherman and David Salle. Sherman in particular has gained notoriety for her authority both behind and in front of the camera, as is demonstrated in this exhibition. The two artists were part of the 'Pictures Generation' movement in America, as a result of artists being disillusioned with the lack of success of social and political transformation, and we can identify Sherman and Salle parodying these systems. Of course, the artists now making work in Trump's America will be in a similar mindset, and we are likely to see more revolutionary ideas and themes presented in contemporary art.

Skarstedt's new gallery is split into three rooms, and the show has been curated in such a way that there is not a significant shift between these spaces, in relation to content; the show is split evenly between Salle and Sherman's work, in order to provide a thorough narrative effect, where the photographic works complement the paintings clearly. Furthermore, this is certainly a well thought-out exhibition, where there are distinct similarities between the artists' work, not merely that they produced work at the same time in the same country. 'Young Kraimer' by David Salle is possibly the first piece to command the viewer's attention; his distinctive use of collage-style composition feels very much at home in a media-saturated world. The artist gives us several layers simultaneously, which is a theme running through the exhibition. The split between a female and male being depicted for longevity, through the form of the portrait, is also highly telling of the almost transhistoric gender divide. 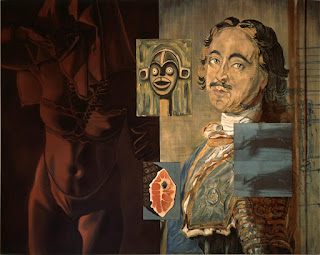 Alongside the large painting are two from Sherman's 'History Portraits' series; the use of portraits are certainly intriguing in the show, as in contemporary art they are used primarily to make references to, or provide satire on, historical scenarios. By the artist using her own body in front of the camera, Sherman ensures that she is controlling the sense of history and contemporaneity in her works. 'Untitled #216' is no exception to this, as the masterly painting feel of the piece is troubled from its legitimacy by the artificial breast that is poking out of the female figure's outfit, as she looks ready to breastfeed her baby, who is also made of plastic. Combining amusing features with the seriousness of a portrait gives the viewer much to consider throughout the exhibition.

The layering prevalent in both artists' work is startlingly in 'Untitled #216', where the contemporary and the historical merge. Again in Salle's neighbouring artwork, 'Lampwick's Dilemma', there are elements that have been composed together in a visual collage; viewing the painting atomistically is not the most effective way of regarding Salle's practice, instead we must seek that which brings the piece together. 'Lampwick's Dilemma' sees the artist embrace portraits of female models and dancers in action, almost pasted on top of an historical portrait. The flow of progress is therefore evident and we are permitted a glimpse into the potential future of the contemporary portrait. 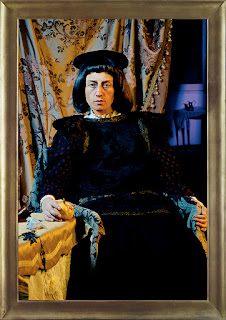 Deception and illusion are certainly recognisable elements of the contemporary portrait, especially when we think of selfie culture and Instagram boasting. This is a tool which Cindy Sherman has utilised well throughout her career, inspiring a mixed critique from viewers. The aesthetic power and symbolism of a female artist becoming a character and posing for a photograph seems incredibly simplistic, yet Sherman's work has garnered iconic status and has been received favourably time and time again at auction. Being a woman adds considerable weight to her work, as she questions gender roles and privileges by dressing as men; works such as 'Untitled #206' expose gender binaries as the viewer questions how incoherent an image this would be if the original subject were a female. Of course, the nobility had portraits taken, as seen in Sherman's other work, however the pure indulgence and imperialist power evident in the 1989 print ensures that the topics and challenges present are not overlooked. 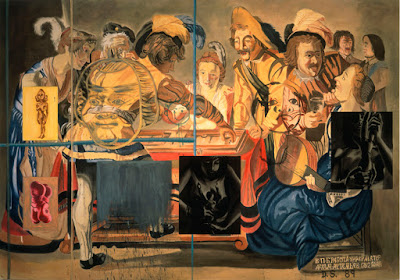