NB: Marsden Woo has now re-located from Shoreditch to Belgravia.

The intimate space of Marsden Woo Gallery, EC2A, possesses a charm to it which seems ideal for experimental sculptural shows, and this is arguably the case in this exhibition of London and France-based artist Emma Woffenden, whose works in glass form an embodiment of what the gallery has deemed "the psychology of the body", which in itself conjures up ideas of gender dynamics and the role of the body in various social customs and ideologies.

Glass now finds itself an under-used, under-represented material in contemporary sculpture, instead more likely to be located in the realm of design, which is notoriously more difficult to exhibit than contemporary art. However with Woffenden's use of the material, we are reminded of its versatility, through the ways in which its utilitarian value is emphasised as a secondary thought to the artist's message, in this case the human body. Aesthetically, the use of glass and its sandblasted form through a mirror evokes a real psychoanalytical power behind 'Phantom', one of the show's first pieces. The awkward, disjointed posture of the glass figure is further made jarring to view due to its solid glass materiality. In addition to the work being angled on its side, with the glass figure's face leaning on the floor, this arresting piece puts the viewer in a transfixed state, unable to look away. 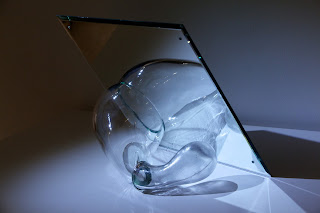 Woffenden's following 'Midwife' series takes the psychological impact build up thus far and places emphasis on the female condition. Some third-wave feminists might take issue with the female figure being reduced to its ability to bear children, but given that this is the primary distinction between the two sexes, the artist's depiction of this is interesting, especially as 'Midwife Drawing' deviates from Woffenden's glass specialism. Moving away from sculpture into drawing makes this particular image feel incredibly raw and intimate, not least because it shows a figure in stirrups. From the standpoint of contemporary art, where dual meaning and subjective ambiguity are paramount, it could be inferred that the artist is employing an alternative, amusing, angle of a sexual position in the painting. The use of brown paint challenges the feminine stereotype of pristine, delicate appearances.

While this idea of depicting the female condition might seem implicit or far-fetched to some, the idea of this body of work being inspired by the "psychology of the body" automatically makes this visual narrative a gendered one, especially when we think of the likes of Sigmund Freud. (Incidentally, much of 'Play-Fight' would not look out of place in London's Freud Museum's permanent collection) However, works such as 'Runner' change the pace of the exhibition yet again, as the sculpture is reminiscent of futuristic hybrid monsters taking over the world in an apocalyptic fiction. The open mouth of the creature enhances this idea, bearing a monstrous, aggressive snarling expression. Although we can identify this as a human emotional reaction, the figure is neither decidedly human nor non-human, and as such we can see the work as a potential contribution to the discussion on post-humanism. This is a fascinating topic presented through the lens of contemporary art, and is something I touched upon in my discussion of Toby Ziegler's work. 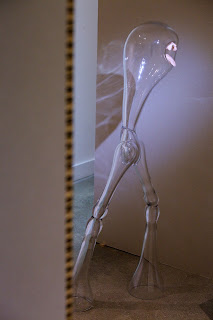 The human elements of Woffenden's glass sculptures have an eerie sense of distance and lack of anecdote about them, almost as if she is inviting the viewer to contribute their own lives and experiences to the work, thus developing a performative element. Showcasing artificial body parts through sculpture is an effective way of the artist forming a rapport between her practice and viewing audience. Ideas surrounding 'reality' and social constructs are explored in the show, seeming most prevalent given the 'post-truth' era in which we are now supposedly living. Marsden Woo's description of the show discusses the "emotions conveyed through gesture", which makes us think about gesture versus language as communication tools, and where contemporary art sits between these two classifications.