NB: Limoncello is no longer functioning as a gallery space.

It is always a decidedly unique viewing experience when one encounters artwork of a highly personal nature, especially in solo shows. In Limoncello Gallery's new space, E1, London-based artist Alice Browne has created a body of paintings on the subject of personal development; while this is, indeed, personal and subjective, the issues at hand in Browne's work are highly relatable for the viewer. At a time when rents are rising at an unprecedented level and artist communities are being driven out of London, the impact of these socioeconomic factors on the individual are also important to consider.

'Forecast' is comprised of a series of paintings and a sculptural installation adopting familiar visual forms, that are ultimately influenced by Dante Alighieri's fourteenth century epic poem 'The Divine Comedy'; the stanza that we can see materialised successfully in the work, "When right before me I saw the human image / So twisted, that tears coming from the eyes / Rolled down into the crack of the buttocks", sets the foundations for the ways in which the artist has observed the skewed situation of human nature and behaviour in the twenty-first century. Browne juggles both the symptoms of modern life with its effects, but fittingly does not claim to provide a solution to the issues we face, in keeping with the transient state of space and time we find in cities such as London. 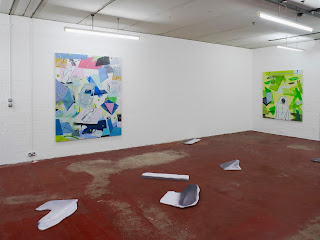 As far as the causes of the modern symptoms are concerned, the first painting in the show bears a prosaic and long title, which appears to be a horoscope, as it begins 'A lot of creative work may need to be finished by today, Gemini...'. Already providing the ambivalent lexicon of 'may' showcases the conflicting ideologies and forces guiding and confusing the average millennial, both on a daily basis and in formulating long-term visions and plans. 'A lot of creative work may need to be finished by today, Gemini...' includes the symbolism of crossed fingers, resembling the National Lottery logo, and a general sign of wishing oneself, or another person, good luck. However the sinister addition of these fingers being severed and isolated is very much reminiscent of the student protests of the last few years, signifying the dilemma of entering the education system at the elitist price of thousands of pounds worth of debt and minimised job prospects due to an uncertain economic climate. Interestingly the remainder of the canvas space is taken up by geometric shapes, a recurrent aesthetic in the exhibition, adopting a distinct window-like physicality, again stressing the seemingly endless possibilities for young people in the metropolis. Yet, Browne's windows do not have a view on the other side, instead merely a landscape of more disjointed, nonsensical shapes.

Away from the canvas, the show's only sculptural piece is 'The Shape of Things to Come', a series of printed vinyl, acrylic and rubber pieces situated on the floor, where the viewer must tactfully avoid them in circulating around the space. In doing so, we are reminded of the complexities faced by the millennial generation, and, rather explicitly, the lack of direction due to various elements such as precarious work, rent prices and other discriminatory forces holding back individuals and entire social groups alike.

'Forwards, Backwards' and 'Backwards, Forwards' also channel this idea coherently, in addition to the most explicit visual expression of the aforementioned passage from 'The Divine Comedy', where in each painting a human figure is shown with their torso and head in different directions, so that a forward-facing body has a head facing its background and vice versa. Browne's influences from cubism are evident in each painting in the show, yet the artist strips them from the movement's early twentieth century context, by physically separating the cube and mosaic-style shapes and giving them their own narrative within their respective canvases. 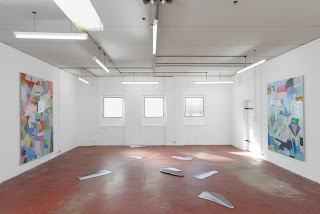 In contemporary art, there is often the feeling of a fear of classification, which certainly has its benefits; in doing so, artists are able to borrow ideas and aesthetic tendencies from other movements and media and adapt them in a way that is surely the whole point of contemporary art practice. Evolving ideas to fit with current political conditions allows a constant refreshing of ideas, in order to speak to various, but most importantly new and disengaged, audiences. The way in which this has been executed in Browne's work is surely successful, with the adaptation of potent art historical figures merged with themes and struggles which are synonymous with the tumultuous times of the twenty-first century.