Amidst the mixed surroundings of Regent's Canal and Regent Studios, Transition Gallery, E8, is rather tucked away from the hubbub of Hackney in East London, so locating and entering the gallery makes for even more of a treat, with the cosy and instantly personal feel of the space. Transition's exhibition programming tends to revolve around gender dynamics and aesthetic expressions of this progress. Yet, the category of 'gender dynamics' is not always explicit in the work, and often involves subjective, independent thinking from the individual, which makes the viewing experience all the more rewarding.

'Isolation Chamber Vacation' draws upon several factors within contemporary feminism which are more than mere legal and social rights for women. Several artists have come together to create an aesthetic discussion on the value of solitude, critiquing how this is expressed as a symbol of a fallen woman in literature, film and, indeed, art. The show opens with a series of watercolours by Nicola Frimpong, whose work is saturated with themes of deeply-rooted, almost historical, hatred and violence, whether this is sexual, racial or otherwise. Frimpong's work clearly comes from a personal place; the pieces in the exhibition, most notably 'Untitled 03', are reminiscent of dream recollections and even Ancient Egyptian papyrus dialectical paintings. There is a strong sense of the artist having witnessed, or experienced, homophobic hatred, as many of the figures in her work are participating in same-sex intercourse or other gestures such as kissing, enabling forced voyeurism from the viewer. The 'forced' element of this emphasises the various (yet somewhat unchanged) role of the female body in history, all the way up to modern pornography. Throughout, these female figures are either covered in blood, decapitated or, on the other side of the spectrum, entirely exposed to the viewer. In the context of the exhibition, we are shown that women's sexuality and physicality are exploited collectively; while there is painful solitude in cases of violence, rape and the like, as second-wave feminism taught us, the personal is the political, and a violation against one woman is an act against all womankind.

Placing the work of Frimpong next to its neighbouring piece, 'Isolated Object for Sexual Use' by Katerina Jebb, is an incredibly insightful and intelligent curatorial move. Moving on from the exposed bodies in the 'Untitled' series, Jebb's large-scale photographic print captures the eye from the moment of entering the gallery space. As an enlarged pair of hyperreal buttocks with legs, we are immediately drawn to the faceless quality of the image, and its distinct lack of humanity, but under closer inspection we notice that they are in fact prosthetic body parts, in a malleable position. Despite photography's rather divisive nature in the art world, the medium choice of 'Isolated Object for Sexual Use' is certainly the most suitable for its message, as it is easy to feel that a sculptural depiction, in the form of the prosthetic parts in the gallery space, would feel novel and far less powerful.

A truly fulfilling part of the exhibition is the variety in which different artists have looked at the status of being alone. In the wonderful library area of the gallery, we encounter three video works, and I was most engaged with Hannah Ford's straightforward, almost matter-of-fact film, 'Semi-Detached', which told the increasingly familiar story of the artist's return to her family home as a result of rocketing rent prices and precarious work in the art world. Featuring authentic home photographs and Ford's own voice, again the piece feels deeply personal. Given Transition Gallery's concentrated, art-focused audience, there is a great chance that the majority of viewers will be able to relate to the film's content. 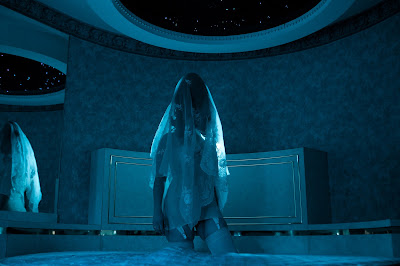 Venturing back into the gallery space we encounter the distinctive work of Juno Calypso, whose practice is a fine example of solitude in itself, as Calypso is model, director, photographer, make-up artist etc. for each piece. Depicting a regularly recurring bubblegum-pink motif, using the artist's work to illustrate private female spaces and interior design ideas is perhaps a little lazy. It is the strong presence of the artist which tells the story of female spaces; knowing that the artist works alone creates a harrowing edge to the viewing experience, almost a deafening silence, which only contributes to the work as part of the 'Isolation Chamber Vacation' whole. With their filmic quality, leaving the viewer desperate to know the stories behind the female characters, works including 'The First Night' are a highlight of an already strong show.

In the shop section of the gallery, we also find another of Calypso's works, 'The Honeymoon Suite', alongside a final piece by London-based artist Kirsty Buchanan, who presents perhaps the best depiction of raw solitude in the form of 'Living to the Side', a pastel and gouache drawing on a piece of white fabric. This alternative to a canvas gives the work a highly domestic value through its materiality, and its content further intensifies the emotional impact. A basic outline of a female figure is in profile, so the viewer can see most markedly the protagonist's nose and imperfectly pointed breast. The figure stares at a blue bed, and her startled, mortified expression implies a deep, poignant horror, packing a psychoanalytical punch. What 'Isolation Chamber Vacation' delivers far exceeds themes of solitude; we find ourselves on a journey of economic, social and domestic indicators of the true state of being a woman in the twenty-first century, with intersectionality spoken for as a voice which needs to be heard. 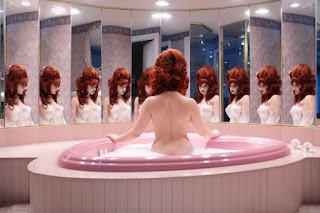